His sole job is posing for cameras, says the Bengal CM 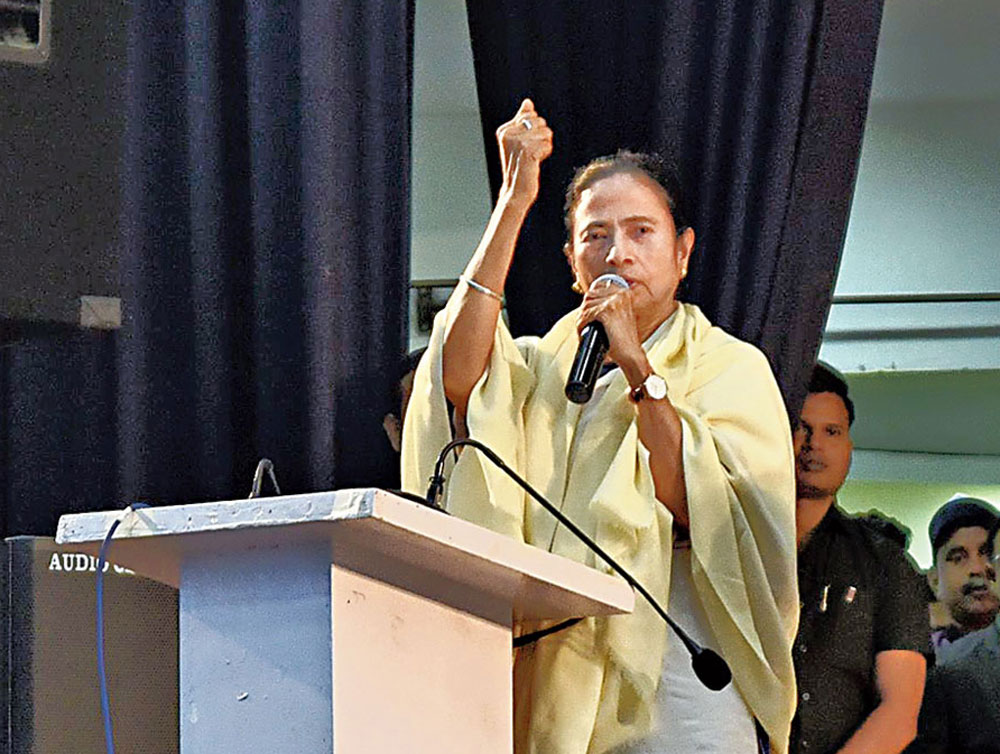 Chief minister Mamata Banerjee on Monday launched a no-holds-barred attack on the BJP-led Centre over Pulwama, accusing the Narendra Modi government of ignoring intelligence inputs because it allegedly wanted to politicise the death of jawans and create an “atmosphere of war” ahead of the Lok Sabha polls.

The Trinamul Congress chief, addressing an extended core committee meeting of her party, lambasted Modi, BJP chief Amit Shah and the RSS-BJP-VHP combine over their alleged attempts to polarise and divide the people ahead of the general election, vowing to eliminate the BJP politically in Bengal and calling for “poriborton (change)” in Delhi.

“What were you doing, Modibabu? Does he do anything other than posing for the cameras…? The Centre had intelligence inputs about Pulwama. Why did it not act to protect our jawans? Why were they not airlifted? Why were the roads not sanitised?” Mamata asked in her most direct attack yet on the Centre over Pulwama since the blast on February 14.

The speech set the tone for Mamata’s proposed Delhi tour this week, where she might release a book at the Press Club of India on Tuesday and attend a meeting of the national Opposition on Wednesday.

Trinamul sources said that on March 8, the International Women’s Day, Mamata is likely to lead a massive march from Shraddhananda Park to Esplanade, marking the beginning of her Lok Sabha campaign.

At Monday’s meeting, Mamata repeatedly called for the removal of the “dictatorial” duopoly of Modi and Shah from the Centre.

“The RSS, the VHP and the BJP are forces that have tried to divide the nation on the lines of religion and inject the venom of communalism and hatred in the minds of the people. This is unprecedented…. There is an RSS stamp on everything today. They follow an extremist ideology, of hatred and violence…. There is no rule of law in the country,” the Bengal chief minister said.

“Their only work is to give bhashan (speeches). They have completely captured Doordarshan. They are misusing all the agencies. They are spending more money on public relations than on welfare projects. From job security to national security, internal security to farmers’ security, unemployment to demonetisation, we have witnessed a total disaster in India for five years now,” she added.

Mamata also castigated the saffron camp for allegedly fomenting tension by using Pulwama as a plank. She warned against the “RSS-BJP-VHP-backed” rumour-mongering over the social media to incite tension and violence.

“They are using the social media to spread fake news. They are using pictures of UP or some other place and claiming the incident happened here. Their entire politics rests on lies. They are trying to create an atmosphere of threat by holding bike rallies after midnight.” Mamata said.

She repeatedly asserted that Trinamul would win all the 42 Lok Sabha seats in Bengal, asking her party not to worry about the BJP or the proposed truck between the Congress and the Left. However, she cautioned the leadership against neglecting alleged plans by the BJP to tamper with electronic voting machines.

When you hear the Pakistan rattle loud and clear, you know it's election time