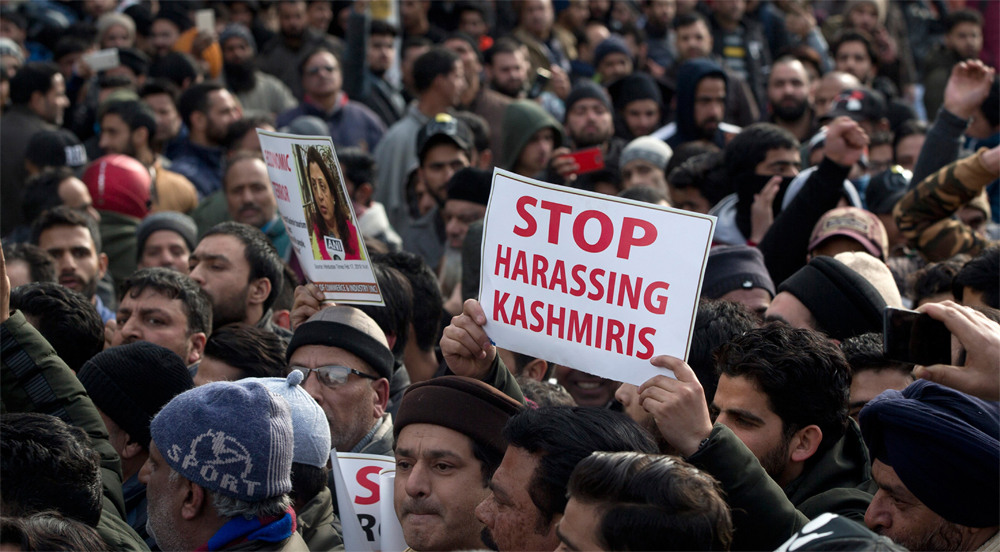 Apart from 700-plus political detainees, the police have rounded up many protesters and stone-throwers and shifted them to jails in Uttar Pradesh and Punjab, sources said.
AP file photo
Imran Ahmed Siddiqui   |   New Delhi   |   Published 18.08.19, 08:41 PM

Hundreds of people, including mainstream politicians, political workers and lawyers, have been detained or arrested in Jammu and Kashmir since the August 5 lockdown and the scrapping of the state’s special status, sources in the security establishment said.

The administration is now facing an acute shortage of space for the detainees and has been forced to rent guesthouses and vacant private houses and turn them into makeshift detention centres, an Intelligence Bureau official told The Telegraph.

Apart from 700-plus political detainees, the police have rounded up many protesters and stone-throwers and shifted them to jails in Uttar Pradesh and Punjab, sources said.

“Over 700 people have been arrested or detained to pre-empt any law-and-order problem. Since the jails are overcrowded, many of them have been lodged in makeshift, rented detention centres,” the IB official said.

Neither Jammu and Kashmir police nor the Centre has officially revealed the number of arrests and detentions since August 5.

A Union home ministry official refused comment when asked about the figure. “These are preventive detentions and it’s an ongoing process. The number is likely to go up further in the days to come,” he said.

“The idea is to ensure they don’t get an opportunity to mobilise people and create serious law-and-order problems. The government does not want any collateral damage or civilian casualties. The administration and the security forces are working round the clock to restore normality.”

Shah Faesal, the civil services exam topper from the Valley who had quit the IAS in January to float his own political party, has been detained under the Public Safety Act after being stopped from flying abroad.

It’s not clear whether Omar and Mehbooba too have been booked under the PSA Act, which allows detention without trial for up to two years. The security agencies have been invoking it to detain people for long periods in Kashmir.

In June, Amnesty International had called the PSA a “lawless law”. It had claimed the act was a “breach of international human rights laws” and that the judiciary’s failure to prevent its misuse had contributed to the “already widespread fear and alienation felt by people” in the state.