Walked with Rahul despite different ideologies as democracy: Aaditya Thackeray

'An attempt to crush the Constitution and democracy is going on in our state and also in the country. Against this, we have come on the road' 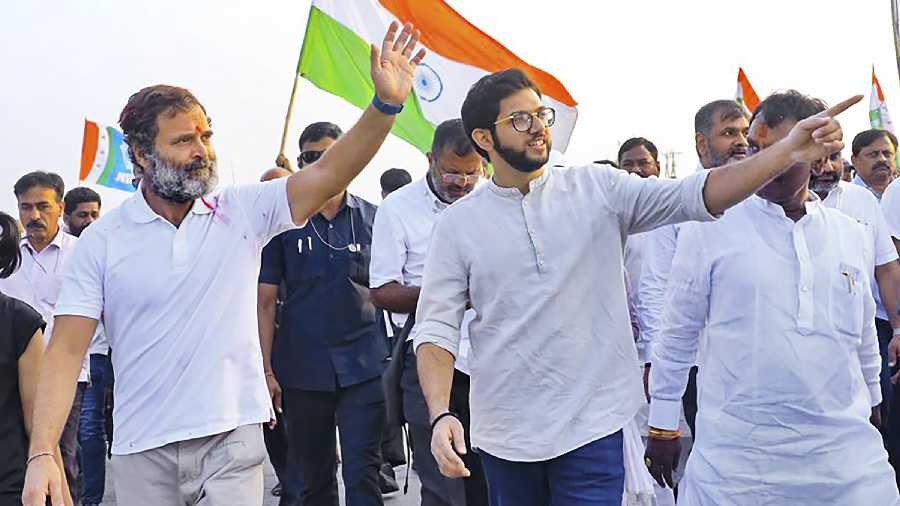 Shiv Sena leader Aaditya Thackeray on Friday said he joined Rahul Gandhi's Bharat Jodo Yatra despite ideological differences as democracy and the Constitution are in peril in the country.

The former Maharashtra minister who belongs to the Uddhav Thackeray faction of the Sena walked with Gandhi for some time as the Congress leader's foot-march entered the state's Hingoli district. "Someone today said that people with two different ideologies have come together. But working together for the country despite ideological differences itself is democracy," Aaditya told PTI over phone. "An attempt to crush the Constitution and democracy is going on in our state and also in the country. Against this, we have come on the road. And it is a good sign for our democracy," he said.

Shiv Sena (Uddhav Balasaheb Thckeray) and Congress, along with the Nationalist Congress Party, are part of the Maha Vikas Aghadi (MVA) coalition in Maharashtra.

Asked what did he discuss with Gandhi during the march, Aaditya Thackeray said, "It had nothing to do with politics. But the issue of the (industrial) investments which recently went out of Maharashtra was discussed." The Eknath Shinde-led Maharashtra government recently came under fire after a semiconductor project by Vedanta-Foxconn and a military aircraft project of Tata-Airbus were bagged by Gujarat.

"Rahul Gandhi has also taken up this issue in his speeches during the Yatra. Attempts are going on to suppress the voice of all those who speak out today. We talked about that too," Thackeray added.