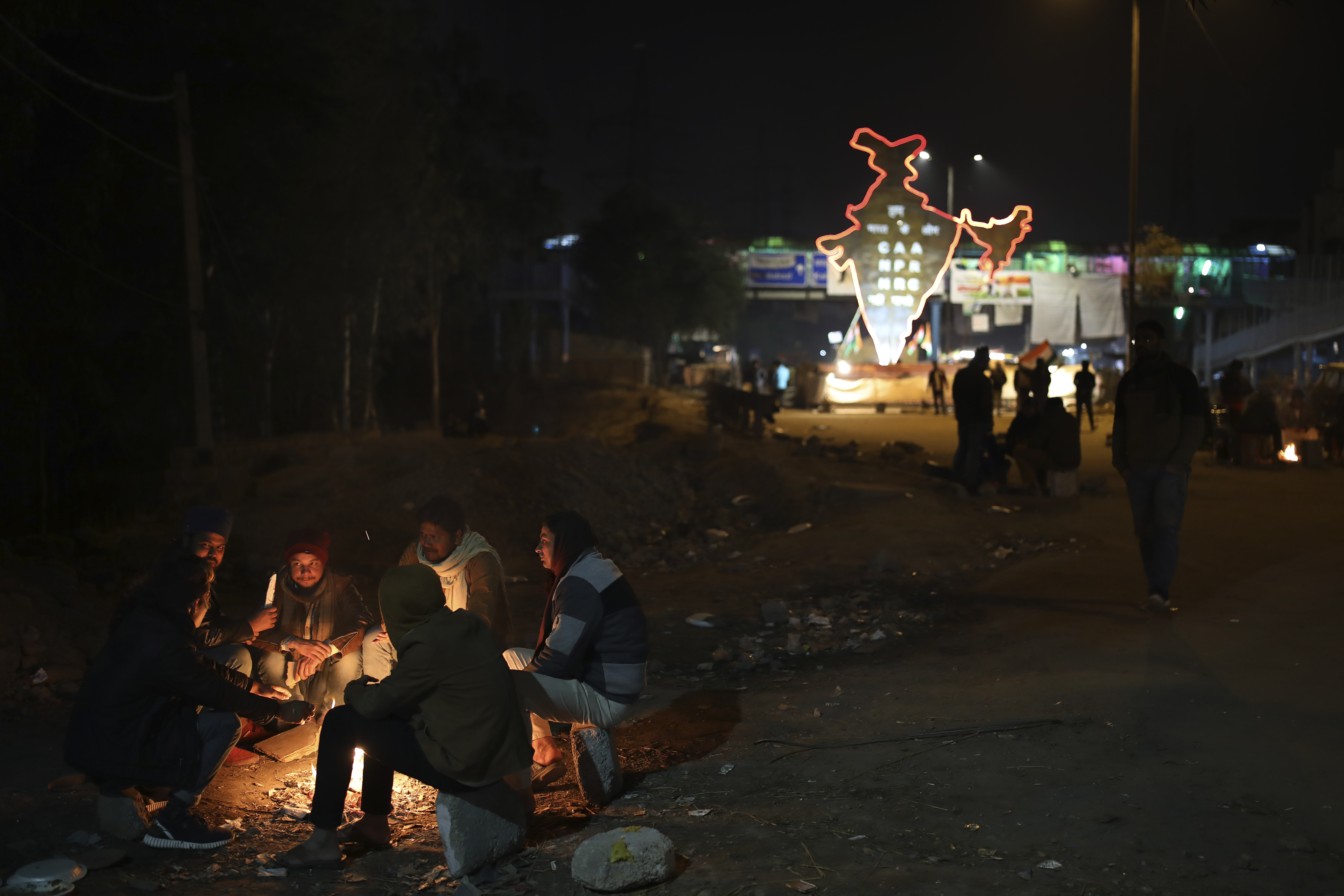 Volunteers keep themselves warm around a bonfire as they man a check-post near the protest site in Shaheen Bagh
(AP Photo)
Imran Ahmed Siddiqui   |   New Delhi   |   Published 26.01.20, 06:58 PM

The three “Dabang Dadis” (Fearless Grannies) of Shaheen Bagh and Radhika Vemula, mother of Rohith Vemula, joined thousands of protesters in hoisting the Tricolour up a 54-foot pole at the epicentre of the citizenship protests on Republic Day.

Led by Radhika, whose son’s suicide at Hyderabad university four years ago had roused the country’s youth against the Narendra Modi government for the first time, the women demanded the Prime Minister talk to them and promise to revoke the new citizenship regime. Else, they said, they would continue their already six-week-old agitation.

After singing the national anthem and other patriotic songs with the protesters, Radhika attacked Modi over the divisive Citizenship (Amendment) Act.

“Prime Minister Modi always calls himself the chowkidar (watchman) of this country but he only talks of building temples. Let him clarify whether he is a chowkidar only for Hindus or for all the country’s citizens,” she said amid huge applause.

“Thousands of women are out on the streets, seeking justice from the government. Where is the Prime Minister who claims he has a 56-inch chest but has not the courage to talk to women protesters?”

With poetry, music and speeches, the protesters vowed to stay put until the Centre agreed to withdraw the new citizenship law and the proposed countrywide National Register of Citizens.

Tricolour in hand, thousands had marched on Sunday morning to Shaheen Bagh where a large number of protesters, mainly women and children, have been on dharna since December 15.

Among those present were Gujarat MLA and young Dalit leader Jignesh Mevani and Fatima Nafees, mother of JNU student Najeeb Ahmed who continues to be missing since an alleged clash with the ABVP on the campus in October 2017.

“We do not want a Prime Minister who has become so arrogant that he has no concern for the thousands of women protesting here over the past one month,” said Sarwari, 76, one of the three matriarchs at Shaheen Bagh.

Bilkis, 82, said: “India belongs to everyone. Our forefathers had fought for the freedom of this country. We are protesting here to save India’s Constitution and its secular fabric from the present-day rulers.”

While most Indians slept on Saturday night, Shaheen Bagh had rung in the 71st Republic Day with a reading of the Preamble to the Constitution and a rendition of the national anthem.

A celebratory mood prevailed also at the Jamia Millia Islamia protest site, where youngsters moved around with the Tricolour painted on their faces.

Once the midnight gathering broke up, the regulars got into the business of cleaning up the place, Swachh Bharat style, in anticipation of the first of a series of night classes on citizenship by political scientist Nivedita Menon.

A short distance away, a crowd on the road and the footbridge above erupted in joy as a tall pole was put up and steadied for the morning’s flag-hoisting. All this at 2 in the morning.

The basic R-Day arrangements in place, it was over to the night class, well attended despite the hour and the less-than-ideal sound system.