Advertisement
Home / India / UP: Priyanka Gandhi sticks to cause, unmindful of elections

UP: Priyanka Gandhi sticks to cause, unmindful of elections

Her decision to helm the march of 10,000 women to mark Women’s Day stood out because the exit polls have universally projected a grim picture for Congress 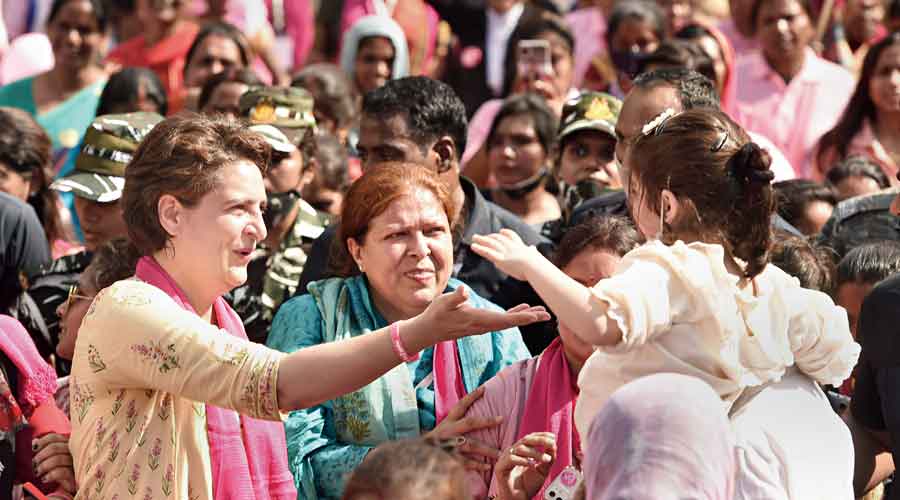 Elections need not be the be-all and end-all of public life, Priyanka Gandhi Vadra showed on Tuesday by taking the uncommon step of leading a procession in Lucknow a day after the seven-phase polling ended in Uttar Pradesh.

Priyanka’s decision to helm the march of 10,000 women to mark Women’s Day stood out all the more because the exit polls have universally projected a grim picture for the Congress, not just in Uttar Pradesh but in most of the five states that went to polls.

Usually, career politicians either take it easy and collect their breath after a gruelling campaign or hold parleys to strike deals in the event of any unforeseen outcome Priyanka, whose involvement with the people in the run-up to and during the elections will not be disputed by even her critics, led the march in a step aligned with the “Ladki hoon lad sakti hoon (I am a girl, I can fight)” theme that was the cornerstone of the campaign.

“All of you contested in the elections with full strength. You fought for a positive change and so you don’t need to bother about the result. The fight has just begun,” Priyanka told the 159 women Congress candidates who walked with her. She called on the gathering to “keep up the impetus of the election for the next few years and see the wonders you can do”.

Throughout the campaign, Priyanka kept an unwavering focus on the importance of women — from the “Ladki hoon” slogan to setting aside 40 per cent tickets for women candidates to announcing social empowerment measures. Her campaign had compelled both the BJP and the Samajwadi Party to take note and acknowledge the role of women.

The march started from 1092 (the Women Power helpline of Uttar Pradesh police) Crossing in Lucknow city and culminated at Sikandarbagh, where Priyanka garlanded the statue of Uda Devi. Uda Devi was the wife of Makka Pasi, a soldier in the army of Oudh’s Begum Hazrat Mahal. Uda Devi, a Dalit, joined the army and fought against the British in Sikandarbagh in 1857.

Several women MPs of the Congress were also part of Tuesday’s procession.

Dwijendra Tripathi, a Congress leader, said: “It was a rare occasion. You have seen leaders taking out processions before elections and after their victory. Priyanka’s procession was after the elections and before the results are announced (on Thursday). This means we are gearing up for the 2024 Lok Sabha polls, and the 2022 Assembly elections were just a warm-up for us.”

That Priyanka has touched a chord was evident in what Ashok Kumar, a priest in Varanasi, said: “We supported the Samajwadi Party in the Assembly elections because the Congress is not in a position to win in the state against the BJP. But we will support the Congress in the general election because it is the only party that can defeat the BJP at the national level. Priyanka and Rahul Gandhi have proved they are genuine leaders…. There were common women in Priyanka’s rally and that was so nice.”

“All these leaders would have been racing against one another to prove their concern for women had Women’s Day fallen during polling. Only Priyanka remembered the occasion after voting had ended,” said Rajashri Singh, a student of Lucknow University, at the march.

UP polls: Priyanka makes a difference