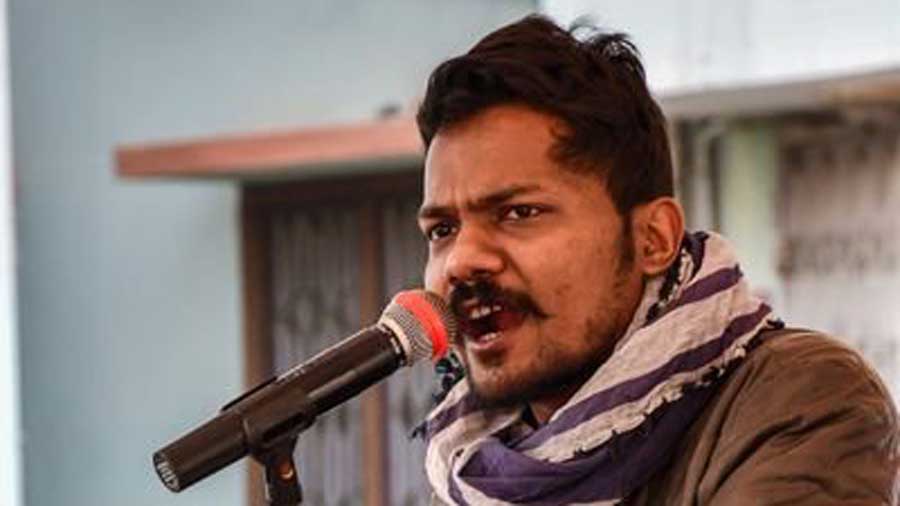 Uttar Pradesh police on Tuesday picked up journalist Prashant Kanojia from his Delhi home for allegedly tweeting a morphed image on the Ram temple in Ayodhya, a little over a year after he was freed by the Supreme Court that found his arrest illegal in another case linked to freedom of expression.

The latest FIR accused Kanojia of sharing on Twitter a morphed image that sought to portray Sushil Tiwari, a Hindu Army leader, as calling for a prohibition on people from the Scheduled Castes, Scheduled Tribes and Other Backward Classes from entering the Ram temple.

The Facebook post of Tiwari that the Twitter upload had allegedly sought to morph was an image of the leader accompanied by the demand that Islamic studies be immediately replaced with Vedic studies in the UPSC.

However, in the “morphed” post attributed to Kanojia, the text had been changed to read: “No Shudra, SC, ST or OBCs will be allowed inside Ram Mandir.” The tweet had added: “According to Tiwariji’s orders.”

Late on Tuesday, the tweet could not be found on Prashant’s handle. Many social media users, however, shared screenshots of what they said was the journalist’s tweet on Sunday.

In the FIR, Kanojia has been booked under IPC Sections 153A (promoting enmity between different groups), 420 (cheating), 465 (forgery) and 505 (statements creating or promoting enmity, hatred or ill-will between classes), and provisions of the Information Technology Act).

Sources in Delhi police said the FIR was registered at Hazratganj police station in Lucknow by a policeman, Dinesh Kumar Shukla.

Prashant’s wife, journalist Jagisha Arora, told The Telegraph that her husband had not uploaded the tweet attributed to him. “My husband did not tweet this at all. Someone edited the image to make it look so. I am very sure that he has not tweeted anything of the sort,” Jagisha said.

“Around 1.20pm, some police personnel from UP came to our house in Munirka. They arrested Prashant but did not give me any paper that explained why. When asked, they replied that it was for a case regarding a recent tweet of his. An officer said they were taking him to Vasant Vihar police station to get transit remand before being taken to Lucknow,” she added.

Bhim Army chief Chandrashekhar Azad tweeted that the arrest of a Dalit journalist was testimony to “the dictatorial attitude of the Uttar Pradesh government”. Azad alleged that the government was disturbed by people writing, reading and speaking, and compared the situation to the Emergency. He demanded Prashant’s immediate release.

On June 8 last year, Prashant had been arrested by Uttar Pradesh police from east Delhi over tweets related to a woman’s purported marriage proposal to chief minister Yogi Adityanath. A judicial magistrate had remanded the journalist in custody in a Lucknow jail for 14 days.

After hearing the petition filed by his wife, Jagisha, the Supreme Court had on June 18 last year used its extraordinary powers under Article 142 of the Constitution to order Prashant’s immediate release.

The apex court had pulled up the Uttar Pradesh government for the “glaring illegality” of the arrest and said that while the authorities “might not approve of the nature” of Prashant’s posts, it was not a crime like “murder” to warrant prolonged incarceration.