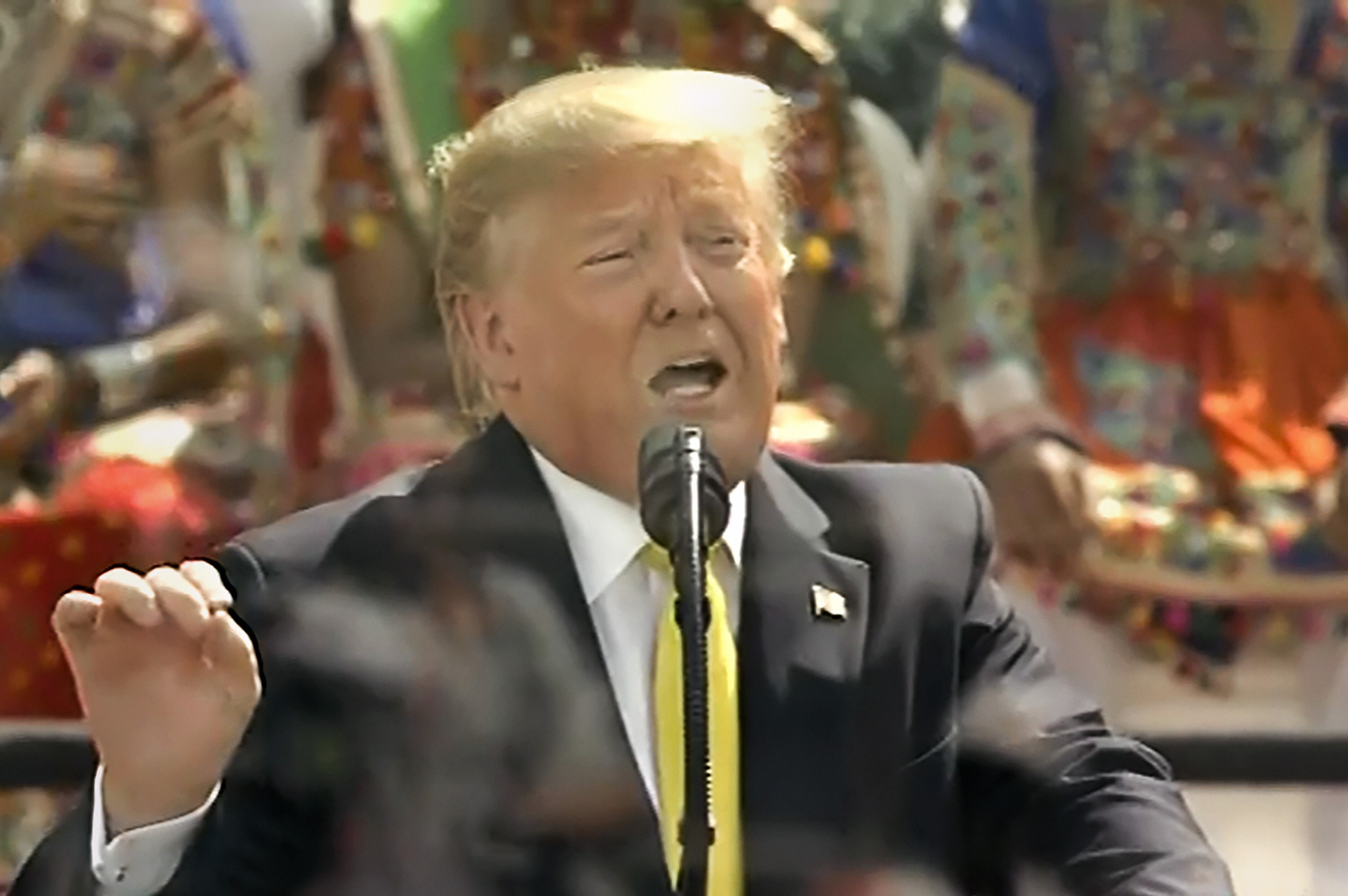 India and the US are committed to defend their people from radical islamic terrorism, resolved to significantly expand defence ties and are working on a 'fantastic' trade deal, said US President Donald Trump on Monday while asserting that his country 'loves' and is 'loyal' to India.

Addressing a huge crowd at 'Namaste Trump' event at the Motera stadium here, the US President, accompanied by his wife Melania and Prime Minister Narendra Modi, talked about India's great tradition of embracing individual freedom, rule of law, dignity of every human being and where people worship side-by-side in harmony.

On his maiden visit, Trump, who was welcomed by Modi on his arrival in Ahmedabad, said his country will remain a 'loyal' friend of India and called the Prime Minister an 'exceptional leader' who works day and night for the country.

'India and the US are committed to fight terrorists and their ideology; that is why my government is working with Pakistan to crack down on terror groups,' Trump said in the presence of his family--daughter Ivanka and son-in-law Jared Kushner-- and top brass of his administration.

'The US will always be faithful and loyal friend of India. Thank you for the spectacular welcome,' he added.

He also announced that the two countries will firm up defence deals worth USD 3 billion on Tuesday and that the US will become India's premier defence partner.

'India and US have natural and enduring friendship,' Trump said to a cheering crowd.

'We are quickly revitalising our alliances all around world,' he said.

Trump said both countries are working on a 'fantastic trade' deal, and observed that Modi is a 'tough negotiator'.

The US President also heaped praises on Modi, saying the Prime Minister is a 'living proof' of what an Indian can achieve with hard work as Trump referred to his humble background as a tea-seller, who had a landslide win in the 2019 Lok Sabha polls.

On his part, Modi welcomed Trump to 'world's largest democracy' and said a 'new history' was being created.

Trump said as the world's largest economy, India gives hope to all humanity and has become an economic giant.

'There is a difference between a nation that rises by coercion and one that rises by setting its people free -- that is India. India and the US have natural and enduring friendship,' he said.

He also touched on India's cultural diversity and riches as he highlighted the success of its blockbuster movies like DDLJ (Dilwale Dulhania Le Jayenge) and Sholay, and its sporting icons like Sachin Tedulkar and Virat Kohli.

He highlighted the boom in the US economy under his presidency and added that India will soon be home to the biggest middle class as it will eliminate extreme poverty in in next 10 years.

On his part, Modi said ties between India and the US are no longer just another partnership but have touched far greater heights.

Welcoming Trump, he said a 'new history' is being created.

Over a lakh people had gathered at the newly built cricket stadium in Motera area.

Though Trump's address was scheduled to start after 1.30pm, people from across the state started arriving at the stadium, touted as the world's biggest, since 8am.

There was a continuous stream of people walking towards the stadium since morning as parking areas for vehicles were away from the stadium.

While many of the attendees were transported to the venue in buses, some were from the city and were eager to see both the leaders.

At the beginning of the event, Modi welcomed Trump at the stadium, saying India and the US are no longer just another partnership but have touched far greater heights.

The Prime Minister also said a 'new history' is being created.

Visit of President Trump to India with his family shows strong ties between India and the US, said Modi.