The offer was made after prayers on occasion of 'Dussehra' festival 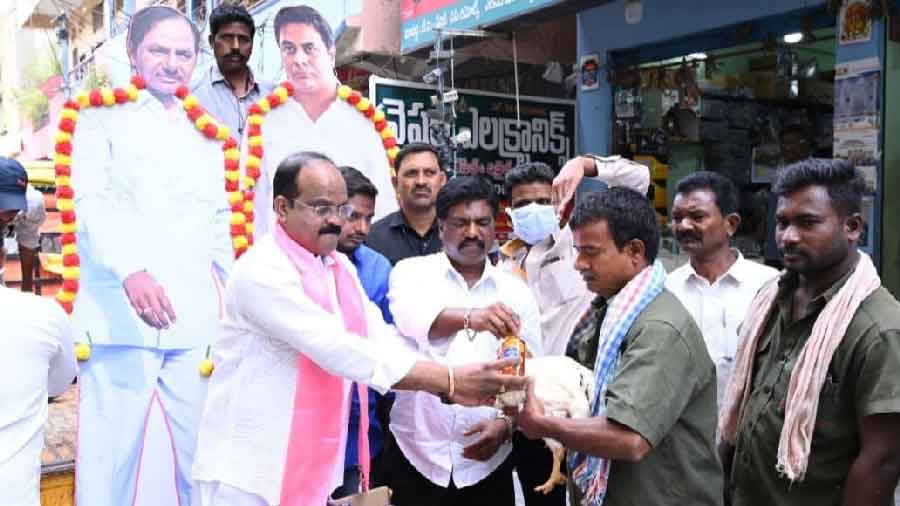 In an unusual festival gift, a ruling TRS leader at Warangal in Telangana on Tuesday distributed chickens and liquor to 200 workers on the occasion of 'Dussehra' and wished a grand success to Chief Minister K Chandrasekhar Rao who is expected to foray into national politics.

Rajanala Srihari, the TRS leader, told PTI that he distributed a fowl (weighing about 2 kg) and a quarter bottle of liquor each to 200 poor workers (hamali).

The distribution was made after offering prayers on the occasion of 'Dussehra' festival.

He wished that Chandrasekhar Rao, who is expected to venture into national politics on Wednesday after renaming the TRS, should become the Prime Minister of the country.

Liquor party! Ahead of #KCR’s ‘national party’ #BRS launch, #TRS party leader Rajanala Srihari distributes liquor and chicken to locals, in Warangal, to celebrate the launch. The leader, reportedly, said he wants #KCR to become PM, his son #KTR to be CM of #Telangana. pic.twitter.com/J0gOYlsKVS

He also wished that Rao's son K T Rama Rao, who is now the working president of TRS and a Minister, should become the Chief Minister of Telangana.

When told that the distribution of liquor by him may come under criticism, Srihari recalled that he had distributed food items and money to needy people, risking his life when Covid -19 cases were rising sharply.

His action of distributing a fowl and a small quantity of liquor would make the poor labourers happy on the occasion of 'Dussehra' festival, he said.