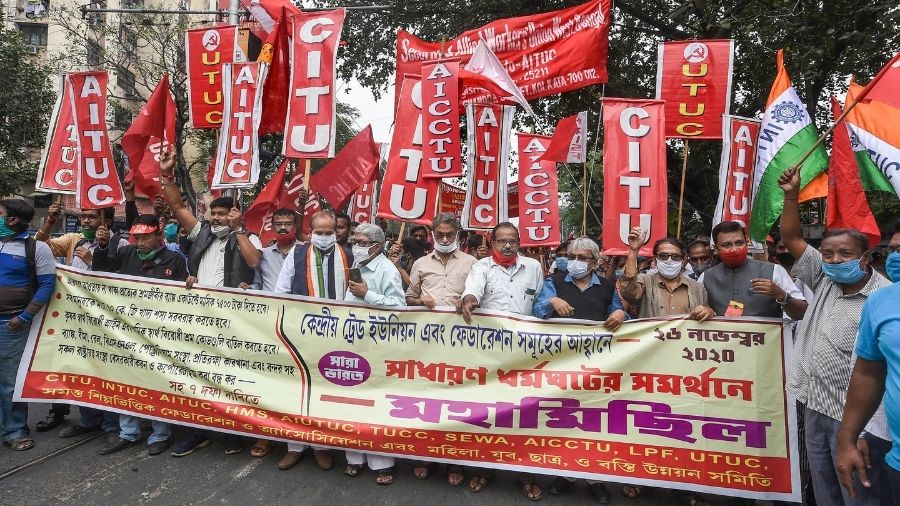 Kerala, Orissa, Assam, Telangana and Puducherry on Thursday witnessed total shutdown as normal life got partially affected in several other states in view of the nationwide strike organised by central trade unions. Over 25 crore workers had participated in the protest, the unions said.

The 24-hour countrywide strike has been called by a joint forum comprising 10 central trade unions to protest against the government’s new farm and labour laws, among other workers-related issues, as well as to raise various demands.

Several independent forums and associations were also part of the joint platform.

“Jharkhand and Chhattisgarh reported 100 per cent strike, including at BALCO,” said the statement.

Sporadic clashes were reported in Bengal as the state got partially affected by the strike, as was Tripura.

However, BJP aligned Bharatiya Mazdoor Sangh (BMS) has not participated in the protest.

He also said that coal mine workers along with those from defence, railways and other public sectors also supported the strike.

"Reports of successful strikes in coal and copper mines, including other mineral resource mines, have been received. The employees of postal, telecom and steel sector were also in action and gramin dak sevaks observed 100 per cent strike," the statement said.