Sasikala, a Lankan Tamil, said 'officials' had blocked her, but Kerala govt confirms her entry 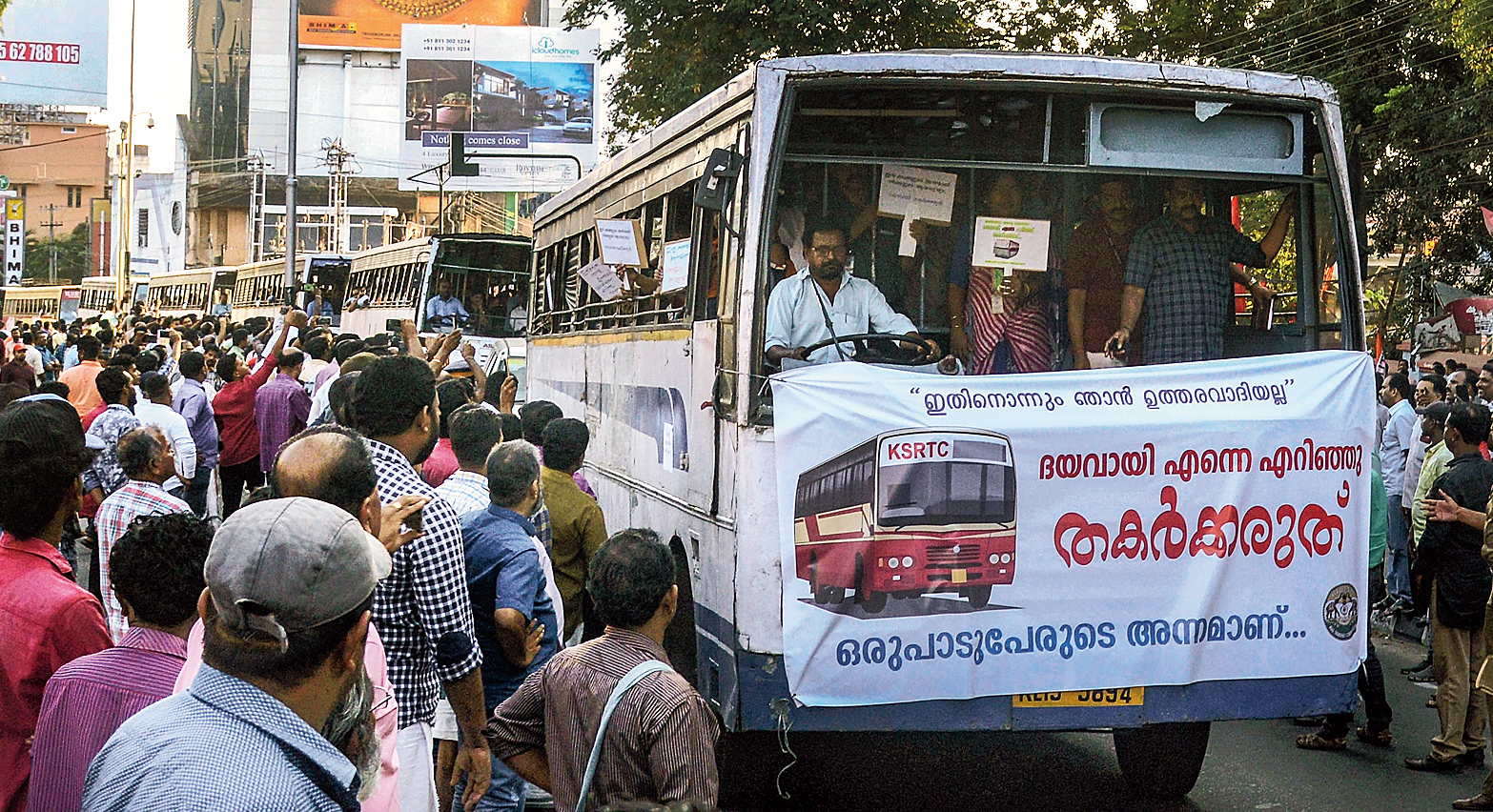 “I am not responsible for any of this. Please don’t smash me up with stones. A lot of people depend on me for their bread,” cries the banner wrapped around a state-run bus in Thiruvananthapuram on Thursday after several such buses were damaged during the shutdown.
PTI
K.M. Rakesh   |   Bangalore   |   Published 04.01.19, 10:25 PM

A Sri Lankan woman’s arrival at Sabarimala on Thursday night was followed by a flip-flop from the Kerala government on whether she had entered the temple, before chief minister Pinarayi Vijayan ended all doubt by confirming she had.

The administration’s serial somersaults, however, generated widespread confusion through the day and underscored the authorities’ dilemma between the need to enforce the apex court verdict and that to maintain peace.

Sasikala, 47, a Lankan Tamil, had around 10.30pm reached the sannidhanam, from where one takes the hallowed 18 steps to the sanctum sanctorum.

She later told reporters that “officials” had blocked her entry. But government sources — apparently from the chief minister’s office — claimed on Thursday morning that she had entered the temple.

These officials released security camera footage, which apparently showed a woman resembling Sasikala at the temple along with a middle-aged man, to several television channels. However, the irumudikettu — bundle of offerings — she carried on her head partly hid her face.

By afternoon, the police intelligence had got involved. Its officers told the media that “closer inspection” suggested the woman in the visuals was not Sasikala.

Many speculated that the police had tutored Sasikala against confirming she had entered the temple, mindful of the mayhem by Sangh parivar activists after two women in their early 40s visited the shrine on Wednesday.

According to this theory, some officials had “goofed up” in their eagerness to advertise the government’s continued success in implementing the Supreme Court order — and to earn the brownie points a foreign woman’s safe entry offered — before the police stepped in.

But later in the day, at a CPM event, Vijayan confirmed that the woman had indeed entered the shrine and taunted the parivar.

“When two women entered Sabarimala (on Wednesday), they (the parivar) enforced a shutdown. Aren’t they calling for another shutdown now that another woman has entered Sabarimala?” he said in Thiruvananthapuram.

The apex court had on September 28 quashed the temple’s traditional ban on the entry of women in the childbearing age (10 to 50 years), but parivar-mobilised mobs of “devotees” foiled every attempt to implement the verdict before being outwitted on Wednesday.

Sasikala had arrived with her husband Saravana Maran and their son at the Pamba base camp on Thursday evening with a request for a police escort.

She had produced her passport to confirm her age and furnished medical certificates showing her uterus had been removed, arguing she did not therefore fall in the childbearing-age category. Legend has it that a royal who had had her uterus removed had decades ago been allowed into the shrine despite being under 50.

Sasikala left the base camp on Friday morning after confirming she had been denied entry. “They are playing with Ayyappan (the presiding deity). I had observed all the rituals for 48 days,” she told reporters, referring to the mandatory practices such as abstaining from sex, maintaining a vegetarian diet and holding prayers.

A transgender person, Kayal, was sent back from Pamba on Friday morning after parivar workers staged a protest. Kayal had arrived wearing women’s clothes but quickly changed into male attire, but that did not placate the protesters.

Four transgender people — all of them biologically male — had successfully completed their pilgrimage on December 18 under police escort.

Rumours swirled on Friday about an impending visit by at least four young women but the minister for temple affairs, Kadakampally Surendran, said he was not aware of any pending request from any woman of childbearing age.

The temple head priest or tantri, Kandararu Rajeevaru, has been asked to explain within 15 days why he had conducted a “purification” without permission from the Travancore Devaswom Board that governs temples including Sabarimala, board president A. Padmakumar has said.

Rajeevaru had shut the temple and carried out the “purification” after two women entered the shrine on Wednesday.

“This is not in keeping with the Supreme Court judgment,” Padmakumar said. The temple board, appointed by the government, had initially opposed the court verdict and filed a review plea.

State minister V.S. Sunil Kumar sought the immediate replacement of the tantri. “Neither tantri nor mantri (minister) is above the Supreme Court and the Constitution,” he said. He also asked: “Why can Brahmins alone be priests (at Sabarimala)?”

The Sabarimala Karma Samiti, an umbrella organisation of pro-parivar groups that had been behind Thursday’s violent shutdown, has decided to intensify its agitation, a PTI report said.

Samiti leader S.J.R. Kumar said a rathyatra would be held from January 11 to 13, covering 10 districts, followed by the lighting of 18 crore lamps during the Makaravilakku festival in Sabarimala on January. The Samiti will organise a march to the secretariat on January 18, and support the tantri’s decisions to protect the temple’s customs.

Police sources said 1,359 people had been arrested by Friday afternoon in connection with 801 cases relating to Thursday’s violence, and that another 717 were in preventive custody.