The Supreme Court on Wednesday held that Delhi’s lieutenant governor does not have independent decision-making powers, and is bound to act on the aid and advice of the Council of Ministers. 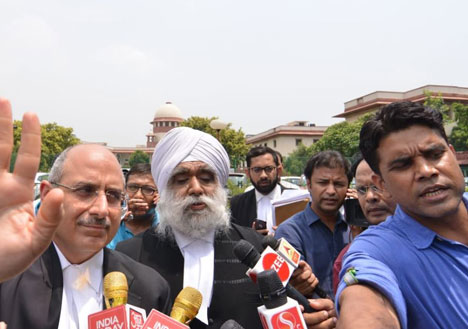 New Delhi, July 4 (Agencies): The Supreme Court on Wednesday held that Delhi’s lieutenant governor does not have independent decision-making powers, and is bound to act on the aid and advice of the Council of Ministers.

”There is no room for absolutism and there is no room for anarchism also,” a five-judge bench of the Supreme Court said in a unanimous ruling pronounced by Chief Justice Dipak Misra. The lieutenant governor, who is appointed by the President, cannot be “obstructionist”, it said.

Chief Minister Arvind Kejriwal and his Aam Aadmi Party government have been lobbying for full statehood, and Kejriwal has been engaged in a constant battle with the lieutenant governor, who is appointed by the President.

The verdict set off celebrations among AAP supporters and workers, who danced in the streets, distributed sweets and beat drums.

The Supreme Court laid down clear guidelines for the LG’s conduct, and delineated the powers of the two branches of the executive in Delhi, which does not have the status of a full state. It is a Union territory designated as the National Capital Territory of Delhi, with its own legislative assembly and council of ministers.

The Supreme Court said all decisions of the Council of Ministers must be communicated to the LG but that does not mean his concurrence is required.

The Supreme Court said that except for three issues—police, law and order, and land—the Delhi government has the power to legislate and govern on other issues. Earlier, Parliament had concurrent powers in matters in the State list.

It was ruling on a batch of appeals filed by Kejriwal's government challenging the Delhi High Court's August 4, 2016, order holding the LG as the administrative head of the national capital.

The Supreme Court said the LG has not been given independent powers, and can refer issues to the President only in exceptional matters and not as a general rule.

Kejriwal’s deputy, Manish Sisodia, termed the judgement “historic” and recalled the landmark mandate that the people of Delhi had given to AAP in the Assembly elections in February 2015 when the party won 67 of the 70 seats.

The tussle between the LG and Kejriwal reached a peak earlier this year when Chief Secretary Anshu Prakash made it clear that he is answerable only to the LG, which resulted in a confrontation at the Secretariat and Prakash was allegedly slapped by an AAP legislator.

Delhi’s then refused to attend meetings called by their ministers.

Kejriwal retaliated by squatting in the visitor’s lounge of the LG’s official resident for several days before a compromise was hammered out.

The AAP government claims that the LG has repeatedly thrown ”hurdles” in the way of the functioning of an elected government through a “wilful interpretation” of the Constitution.

”Whether it was the issue of installation of CCTV cameras, ration scheme, transfer and posting (of officials), interference was being created,” Sisodia said.

Kejriwal tweeted he will hold a Cabinet meeting later in the day.