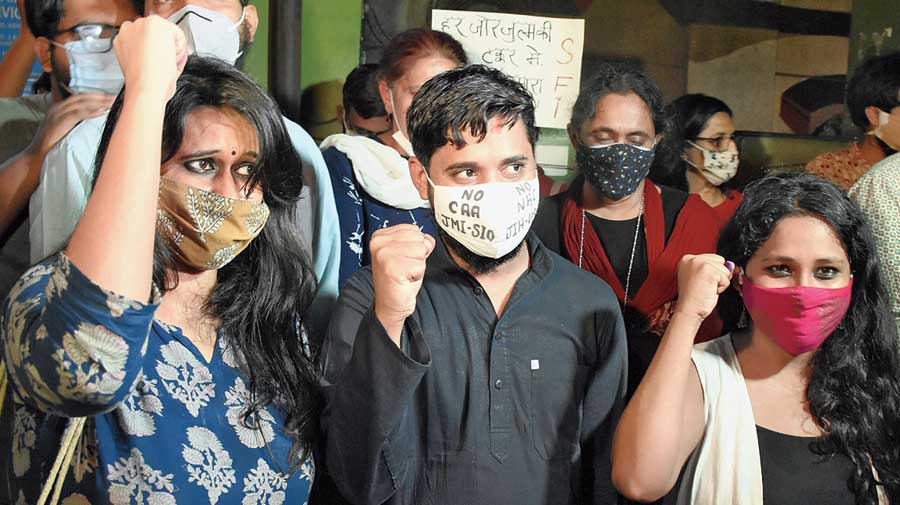 The issue of reading down of anti-terror law UAPA is important and can have pan-India ramifications, the Supreme Court said on Friday making it clear that the Delhi High Court verdicts granting bail to three student activists in north-east Delhi riots case will not be used as precedent by courts in the country.

A vacation bench of Justices Hemant Gupta and V Ramasubramanian termed as troubling that the high court has written 100 pages discussing the entire anti-terror law UAPA while deciding the bail applications in the case and said it will require interpretation by the apex court.

The apex court agreed to hear the appeals filed by Delhi Police challenging the verdicts of the high court and issued notices to JNU students Natasha Narwal and Devangana Kalita and Jamia student Asif Iqbal Tanha seeking their responses.

While refusing to stay the high court verdicts granting bail to the three accused, the bench said that these judgements will not be treated as precedent by any party before any court.

“It is clarified that release of the respondents (Narwal, Kalita and Tanha) on bail is not interfered with at this stage,” the bench said.

Taking note of Solicitor General Tushar Mehta's submission that the entire Unlawful Activities (Prevention) Act (UAPA) has been turned upside down by the high court in granting bail in the case, the bench said, The issue is important and can have pan-India ramifications .

“We would like to issue notice and hear the other side,” it added.

Mehta urged the apex court to stay the high court verdicts saying the findings arrived at in these judgements virtually record acquittal for these accused and other co-accused would also seek bail relying on them.

“The way the Act has been interpreted, probably it will require interpretation by the Supreme Court. That is why we are issuing notice,” the bench said.

Senior advocate Kapil Sibal, appearing for the student activists, said there is no doubt that the apex court should consider the ramifications and interpretation of the UAPA so that there is a judgement on the issue from the top court.

“We are dealing with bail applications,” Sibal said.

“That is what is troubling us. It is surprising that in a bail application, there is 100-page judgement discussing the entire law,” the bench said.

“There are many questions which arise as legality of the UAPA was not challenged before the high court. These were bail applications,” the bench observed.

The top court issued notices to these student activists and said that the matter would be heard in the week commencing July 19.

At the outset, Mehta referred to the judgements of the high court and said, the entire UAPA has been turned upside down on its head .

He argued that after these verdicts, technically the trial court is required to place these findings in its order and discharge the accused in the case.

Mehta said that 53 persons died and over 700 were injured during the riots which took place at a time when the then US President and other dignitaries were here.

“The high court has made wide ranging observations,” he said, adding, “They are out on bail, let them remain out but please stay the judgements.”

“Stay by the Supreme Court has its own meaning,” he said.

While reading down some paragraphs from the high court verdicts regarding right to protest, Mehta said, “If we go by this judgement, even the lady who assassinated the former Prime Minister was also protesting.”

“Kindly stay these orders,” he told the bench.

Sibal said the student activists also have a lot to argue in the matter.

The bench, while issuing notice on the appeals, said the counter, if any, be filed within four weeks.

The high court had on June 15 granted bail to these three student activists saying in an anxiety to suppress dissent the State has blurred the line between right to protest and terrorist activity and if such a mindset gains traction, it would be a "sad day for democracy".

The high court, in three separate judgments, set aside the trial court's orders denying bail to these student activists and allowed their appeals by admitting them to regular bail on furnishing a personal bond of Rs 50,000 each along with two sureties of the like amount.

These three student activists were released from jail on June 17.

The case relates to last year's communal violence in north-east Delhi during protests against the Citizenship Amendment Act (CAA).

In its three separate appeals filed in the apex court, Delhi Police has said that the high court's findings are perverse and contrary to record and appeared to be based more on the social media narrative than the evidence gathered and elaborated in the charge sheet".

In the appeals, the police has dubbed the verdicts as "mini trial" and said such observations were unfounded and perverse insinuation.

Delhi Police contended that bail was granted to the accused on an irrelevant consideration which will have far reaching consequences for cases investigated by NIA and other probe agencies.

“The high court not only conducted a mini-trial but has also recorded perverse findings which are contrary to record and almost decided the case while adjudicating bail pleas," said the police while seeking to set aside three bail verdicts.

Kalita, Narwal and Tanha are accused in four, three and two cases respectively relating to communal riots that broke out on February 24 last year.