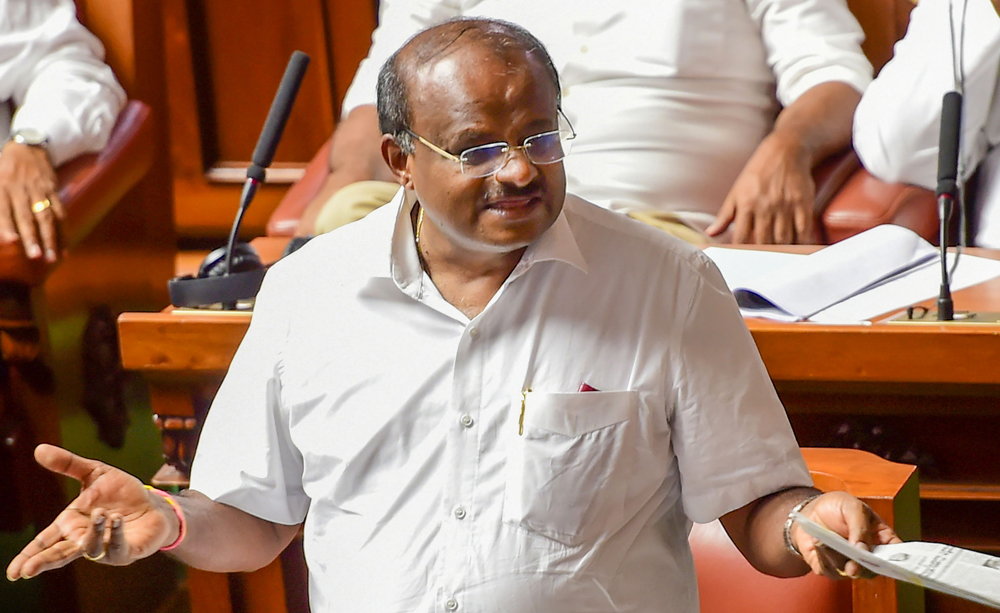 The Karnataka outcome was more or less a foregone conclusion but as the verdict became clear on Tuesday, an element of the unexpected was indeed injected into Bangalore.

Police declared prohibitory orders in the entire city for two days and ordered all bars, pubs and liquor stores to remain closed until 6pm on Thursday.

The precautionary measure was put in place after supporters of the Janata Dal Secular-Congress coalition and that of the BJP faced off outside a luxury apartment complex not too far from the Assembly.

A few hours before the trust vote, the complex became the centre of attraction as two Independent MLAs were sighted in one of the apartments there.

A large number of coalition supporters gathered outside the apartment and chanted “BJP thieves”. BJP members also rushed to the spot, setting the stage for a stand-off.

The police issued the prohibitory orders to prevent a recurrence, sources said.

Eventually, the two Independents, R. Shankar and H. Nagesh, abstained from the voting. So did N. Mahesh, the lone Bahujan Samaj Party MLA who had won as a JDS ally. In a trust vote, abstentions end up aiding the Opposition.

Congress MLAs B. Nagendra and Shrimant Patil had sought leave of absence citing health reasons. Patil is in a Mumbai hospital recovering from a cardiac incident.

The final tally read: 105 against the trust vote and 99 for.

Chief minister H.D. Kumaraswamy’s innings ended on the very day he completed the 14th month. He had assumed charge on May 23 after his Janata Dal Secular forged a post-poll alliance with the Congress to keep the BJP at bay.

The government was rocked by tremors of rebellion throughout the term.

The dissidence came to head with 12 Congress MLAs and three JDS lawmakers seeking to resign from the Assembly earlier this month. Since then, the government has been hanging by a thread of hope that at least a few of the rebels would return to save the government.

A consolation vote came from Ramalinga Reddy who had resigned along with the others but returned to the party after desperate efforts by Congress leaders.

In the end, that did not matter as most of the rebels remained in Mumbai where they have been sequestered since a couple of weeks.

Speaker Ramesh Kumar had on Monday managed to convince the ruling benches to put the confidence motion to vote after sustained pressure to run the discussions until Wednesday.

The Opposition BJP wanted the motion to be put to vote at the earliest. The unique trust vote debate saw a silent BJP refusing to take part in the discussions.

“For the first time in Karnataka, Opposition members failed to participate in the discussions on the confidence motion,” Kumaraswamy said.

As soon as they defeated the chief minister’s confidence motion, BJP members, led by their state president and future chief minister B.S. Yeddyurappa, flashed victory signs from the floor of the Assembly.

After stepping out of the Assembly, Yeddyurappa said: “I want to assure people of Karnataka that a new era of development will start from now. Our farmers are suffering from drought. In the coming days, we promise to give importance to farmers.”

BJP leader R. Ashoka said his party would stake claim to form the government on Wednesday.

Asked about the future of the MLAs who resigned from the Congress and the Janata Dal Secular, Ashoka said: “We have nothing to do with those who resigned. They are still Congress members. We have neither met them, nor spoken to them.”

The rebel MLAs who caused the downfall of the coalition government are likely to return to Banglaore on Wednesday.

Congress leader P.C. Siddaramiah said his party had decided not to take back the 13 rebels who resigned. “Lots of people have gone to the BJP and suffered. But we will never take back any of our members who resigned.”