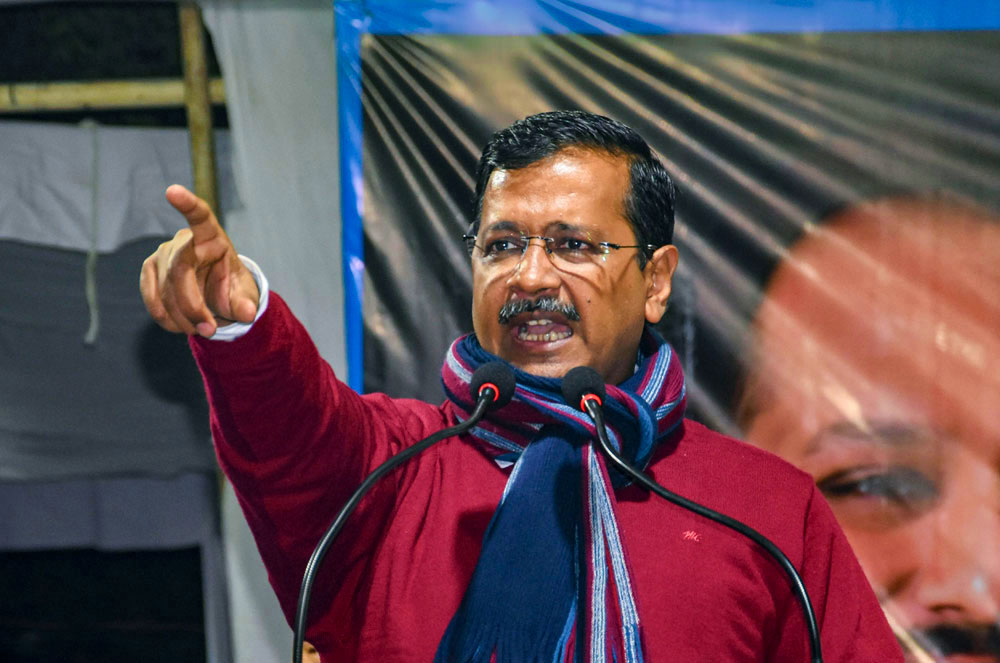 Aam Aadmi Party (AAP) is in the middle of a campaign blitz, the kernel of which is formed by its social media outreach to voters. So, it is not uncommon of late to be greeted by Arvind Kejriwal on YouTube every time you go play a video and see him hard sell his government’s work in improving education and alleviating water woes of Delhi citizens. 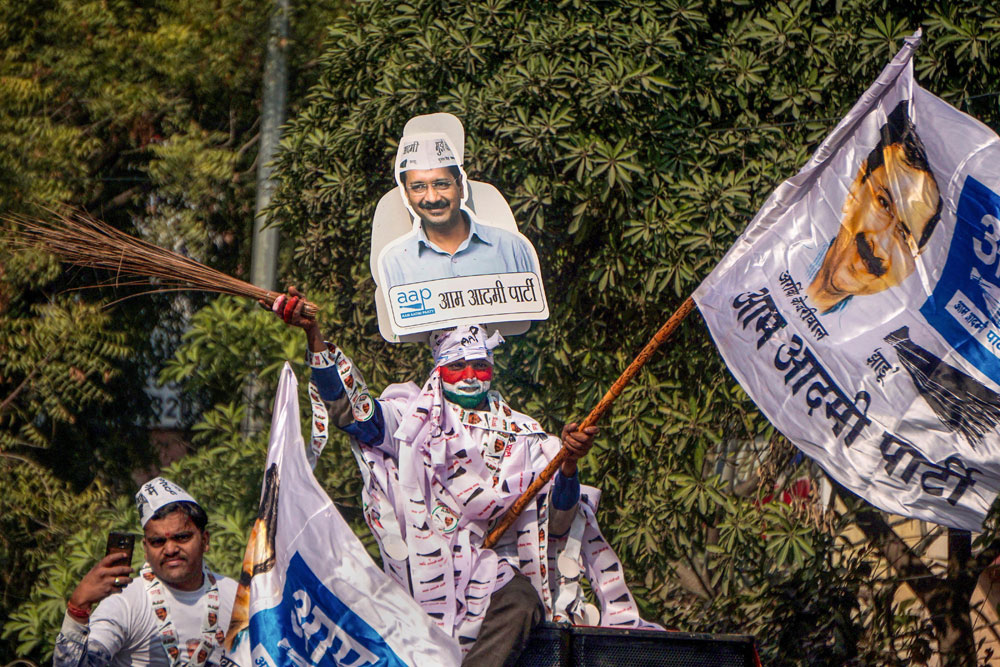 AAP volunteers during an election campaign roadshow in support of the party candidate and Transport Minister Kailash Gahlot (unseen) in Najafgarh constituency, ahead of the State Assembly elections

The party has footprints in almost every mass social medium, be it Facebook or Twitter, and has managed to create a brand in itself. AAP has been conveying its message to the people not only through odd slogans but also through unconventional means like songs—one of which, Lage Raho Kejriwal, is composed by Vishal Dadlani—and music walks, where volunteers break into jingles while campaigning for their leader.

What does all this amount to? AAP spokesperson Jasmine Shah says the party’s social media campaign has been like no other.

“It has been, by far, the stand out campaign for any political party, not just for this election, but in any recent election in the last few years,” he told The Telegraph Online.

“There are multiple reasons, one of which is the creativity that our volunteers bring, which is original, unlike the paid IT cells of other parties, where workers are paid per tweet. In our case there is a large network of volunteers in the country who chip in with their time and effort,” he said.

Ever since its election campaign was announced, AAP has been attuned to the youth and its many vibes using its buzz campaign, which, Shah said, was helmed by volunteers working for the party. 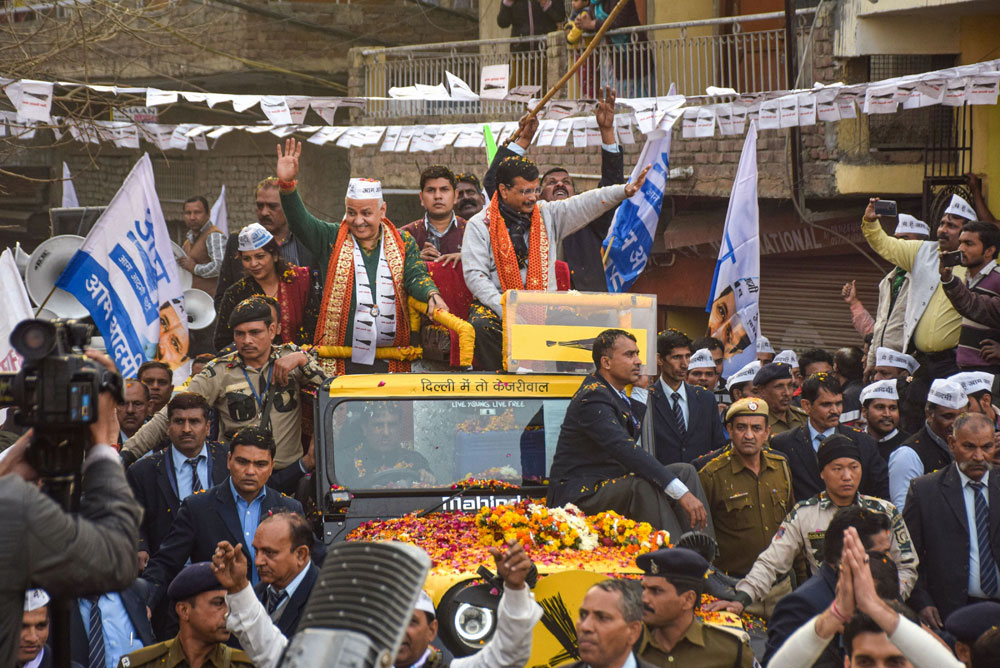 Delhi Chief Minister Arvind Kejriwal during an election campaign roadshow ahead of the State Assembly elections, at Patparganj in New Delhi, on Monday
PTI

“There’s a ground buzz team. It does multiple things like street plays, which is a great way of engaging people. Then there are flash mobs, which we call ‘music walk’ in which our volunteers take a guitar and sing while walking in the market areas, which catches a lot of attention.”

AAP volunteers – 15 teams of 10 members each _ have performed over 1,000 plays since the campaign began. These are largely improvised with no written script, focusing on issues on which it has a good track record, like development initiatives, electricity, water, education and healthcare.

However innovative AAP’s campaign may be, there is an emerging feeling that it may not be as effective as its leaders claim it is, given the atmosphere of religious polarization in poll-bound Delhi. But Shah, an IITian like his boss Kejriwal, is quick to dismiss the conjecture of AAP ceding any ground to the BJP’s nationalism campaign in the backdrop of the Shaheen Bagh protests.

“BJP is winning the campaign war only in its mind. They are completely divested from the reality on the ground. There is no conversation on Shaheen Bagh among people insofar as their voting choice is concerned. It is just a media hype created by the BJP, because they have absolutely no agenda,” he said.


BJP is winning the campaign war only in its mind. They are completely divested from the reality on the ground. There is no conversation on Shaheen Bagh among people insofar as their voting choice is concerned. It is just a media hype created by the BJP, because they have absolutely no agenda.
- AAP spokesperson Jasmine Shah


Asked if it was a deliberate choice for Kejriwal to not visit Shaheen Bagh, the Okhla colony which has led to similar anti-CAA and NRC protests across the city, Shah chose to provide a measured answer.

“There is nothing which will be achieved by Kejriwal visiting Shaheen Bagh. It is clearly an issue of the people having a grievance with a central law and it is the Union home minister who controls law and order in Delhi. So, it is up to the Centre to visit, talk to them and find a resolution. If they were protesting against any Delhi law or our schools then it would be the responsibility of the Delhi government to talk to them,” he said.

Praveen Rai, a political analyst with Centre for the Study of Developing Societies (CSDS) said AAP’s approach to its campaign was “calculated” and politically expedient”. Rai explained that while Congress has been very vocal in its anti-CAA stand, with leaders having visited Shaheen Bagh, Kejriwal has just stuck to condemning the law.

“He has not visited the protest site because he knows the moment he or any of his any of party men do so, the BJP will go all out and completely change the narrative from governance issues to a communal issue,” Rai said.

AAP and Kejriwal, he reasoned, were wary after losing Punjab and elsewhere. “Delhi is the place where it has to win the election to remain relevant in politics. That is why they have taken a very guarded stand,” he said.