Signs of growing bonhomie between BJP and BJD 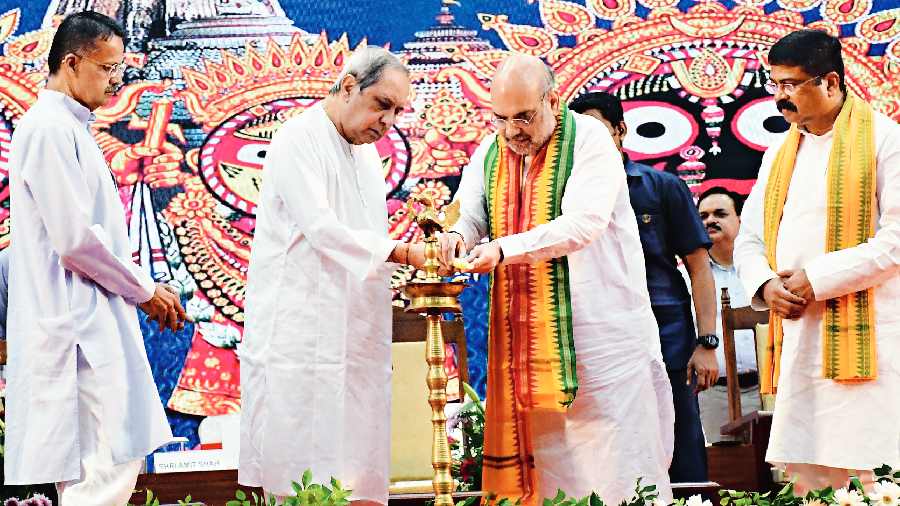 Union home minister Amit Shah and Odisha chief minister Naveen Patnaik shared the dais at the 75th anniversary of Odia daily Prajatantra on Monday amid talk of growing bonhomie between the BJP at the Centre and the ruling Biju Janata Dal in Odisha.

The two leaders shared the dais at a public event for the first time. The relationship between the BJD and the BJP, particularly with Shah, was marked by bitterness during the last general elections in 2019. Shah during his campaign had compared the Naveen-led BJD government with a burnt transformer.

Prajatantra was founded by former chief minister Harekrushna Mahatab. His son and BJD MP from Cuttack Bhartruhari Mahtab played a pivotal role in bringing Shah and Patnaik on a platform in Cuttack. The development comes at a point when there is talk of increasing closeness between the BJP and the BJD. BJD, a regional outfit led by Naveen, has been in power in the state for the last 22 years.

While Naveen’s relations with Prime Minister Narendra Modi have always been extremely cordial with both leaders refraining from attacking each other even during elections the same could not be said of the chief minister’s equations with Shah when it comes to election campaigns. During the 2019 elections, when Shah had set the state BJP the target of winning more than 120 Assembly seats, the leader had gone ballistic against the Patnaik regime and called upon people to throw it into the Bay of Bengal. Since then there has been an attempt by the BJP leadership at the centre to bring the two leaders close to each other. Shah has ever since refrained from making any personal attack against Naveen and the latter has reciprocated by supporting most of the moves of the NDA government and even backed its candidates for the post of the President and the Vice-President.

The body language of the two leaders at the Cuttack event indicated that they left their past animosity behind to begin a new chapter of friendship. Shah was seen helping Naveen release the commemorative postal card on the occasion of the 75th anniversary of Prajatantra and also lighting the ceremonial lamp.

Addressing the gathering at Cuttack’s Indoor Stadium, Shah talked about how the Union government and the state government were working as “Team India” for the overall development of the state. “Good times (Acche Din) have come for the state. For the first time, so many people from Odisha are occupying key positions in the government — Dharmendra Pradhan, Ashwini Vaishnaw, Bishweswar Tudu are in the ministry and there is Reserve Bank governor Shaktikanta Das,” he said adding that his government had a special focus on Odisha.

He also spoke of the amazing journey of newly elected president Droupadi Murmu from a tribal village to Raisina Hill. “We had a deficiency. No woman from the tribal community had occupied the office of the President. Now with Droupadi Murmu, the issue has been addressed,” he said.

Speaking on the occasion, the chief minister said, “It’s a happy moment as Union Home Minister Amit Shah has joined the program. I welcome him to Odisha.” Naveen spoke about the role of the media. “Media runs on the basis of people’s trust. It is therefore expected that the media should prioritise the real issues of people rather than politics. Media essentially should be the voice of people,” he opined

Pradhan, who is considered to be a Shah acolyte, tried his best to ensure that the usual rivalry between state BJP and BJD did not mar the programme and the visit of Shah in any way.

In fact, the Pradhan camp of BJP and the chief minister’s followers saw to it that the breach of protocol issue raised by the Bhubaneswar BJP MP Aparajita Sarangi did not sour the relations between the two parties. Sarangi had sought to know why the Odisha government’s minister of state for home Tushar Kanti Behera was not present at the airport to receive Shah at the airport on Sunday night. The home minister had landed around 1.30am at midnight. Sarangi has also written a letter to the chief minister on the issue. However, the BJD has clarified that there was no question of showing disrespect to Shah and there was no breach of protocol.

Later in the afternoon, Shah talked to state BJP leaders at a closed-door meeting. He called upon them to strengthen the party at the booth level and lay the ground for the party’s victory in 2024 elections. He  also launched the Odisha edition of Modi@20:Dreams Meet Delivery.

On Monday morning, he visited the 11th-century Lingaraj temple in Bhubaneswar to offer his prayers. He also visited the Netaji Subhas Chandra Bose Birth Place Museum at Cuttack and had breakfast at the party’s state unit president Samir Mohanty’s house in Bhubaneswar.