'Parade' of MLAs at a Mumbai hotel 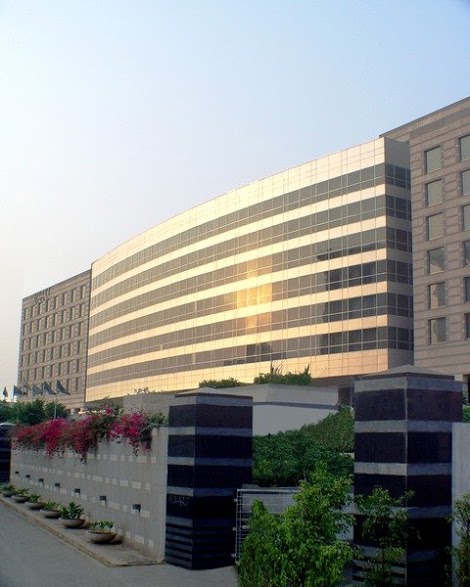 The Sena and Congress MLAs arrived at Grand Hyatt Mumbai (in picture) shortly before 7 pm by various buses arranged by their parties. NCP MLAs were shifted there earlier from another hotel.
Wikimedia Commons
The Telegraph And PTI   |   Mumbai   |   Published 25.11.19, 03:06 PM

This wasn't a 'political fashion show' but certainly one unlike any other Maharashtra has seen.

The luxury hotel in suburban Mumbai, host to many fashion shows, including the biggest one in the country, on Monday saw the 'parade' of Shiv Sena-NCP and Congress MLAs.

The MLAs of the three parties took an oath to be 'fight against the BJP' and not fall prey to any offer.

'We live by (the code of) Satyamev Jayate. We are friends and together we are stronger. I dare anyone to break break our alliance,' the Sena chief said.

NCP chief Sharad Pawar said that a minority government is in the state.

'They (BJP-Ajit Pawar) installed a government without a majority,' he said.

The NCP chief reiterated that his nephew Ajit Pawar's decision was 'his own' and that he did not have the right to issue a party whip.

Maharashtra Congress chief Balasaheb Thorat said that the Fadnavis-led government should resign as they do not have a majority.  'We have 162 MLAs with us,' he said.

The event comes a day before the Supreme Court passes an order on the issue of floor test for the Maharashtra government led by Devendra Fadnavis whose swearing-in has been challenged by Shiv Sena-NCP-Congress combine.

The Sena and Congress MLAs arrived at the hotel shortly before 7 pm by various buses arranged by their parties. NCP MLAs were shifted there earlier from another hotel.

Even as the 'parade' of MLAs was in progress in the hotel, supporters of these parties gathered outside shouted slogans against Prime Minister Narendra Modi and Home Minister Amit Shah.

The move was announced hours after the leaders of the three parties submitted a letter to Maharashtra governor Bhagat Singh Koshyari, claiming that they have the requisite numbers to form the government.

Announcing 'parading' the MLAs on his tweeter handle, Sena MP Sanjay Raut appealed to the governor to witness the assembling of the legislators of the three parties at 7 pm.

'We are all one and together, watch our 162 together for the first time at grand Hyatt at 7 pm, come and watch yourself @maha_governor,' Raut tweeted.

We are all one and together , watch our 162 together for the first time at grand Hyatt at 7 pm , come and watch yourself @maha_governor pic.twitter.com/hUSS4KoS7B

An NCP leader said the move to parade the MLAs is aimed at 'turning the public perception towards us'.

'Once we parade the 162 MLAs in one hall, the entire nation will come to know that the BJP is playing a dirty game in Maharashtra by misusing the office of the governor,' he said.

In a related development on Monday, the Supreme Court said it will pass an order at 10.30 am on Tuesday on the plea filed by the Sena-NCP-Congress combine against the state governor's decision to swear-in Devendra Fadnavis as chief minister on November 23.

A bench comprising justices N. V. Ramana, Ashok Bhushan and Sanjiv Khanna is likely to pass an order on holding of a floor test.

The MLAs of the Sena, the NCP and the Congress were shifted to different hotels in Mumbai on the night of November 23, hours after senior NCP leader Ajit Pawar, in a surprise move, joined hands with the BJP.

After Ajit Pawar submitted a letter to the governor claiming that he has support of NCP MLAs, the President's Rule, which was in force in the state since November 12, was lifted on early Saturday.

Subsequently, the governor administered oath to Devendra Fadnavis of the BJP as the chief minister and Ajit Pawar as the deputy chief minister.

In a retaliatory move, the NCP on Saturday evening removed Ajit Pawar as the legislature leader of the party depriving him of power to issue a whip to NCP MLAs during floor test.

In the letter submitted to the government, the 'Maha Vikas Aghadi', the post-poll alliance formed by the Sena, Congress and NCP, claimed it has the majority whereas Fadnavis-led government 'lacks required numbers'.

'Once Fadnavis fails to prove his majority during the floor test, the Shiv Sena's claim for government formation should be considered,' the parties said in the letter.

The BJP has dubbed the letter 'bogus' claiming that technically Ajit Pawar is still the leader of the NCP's legislature wing who has extended support to the BJP.

According to sources, Independent legislators and other MLAs could tilt the scales in favour of either the BJP- led government of Fadnavis backed by Ajit Pawar or the Sena-Congress-NCP combine during the floor test.