'Sena had decided not to seek the resignation of Shah over the Delhi riots, rather focus on the failure of intelligence and other agencies' 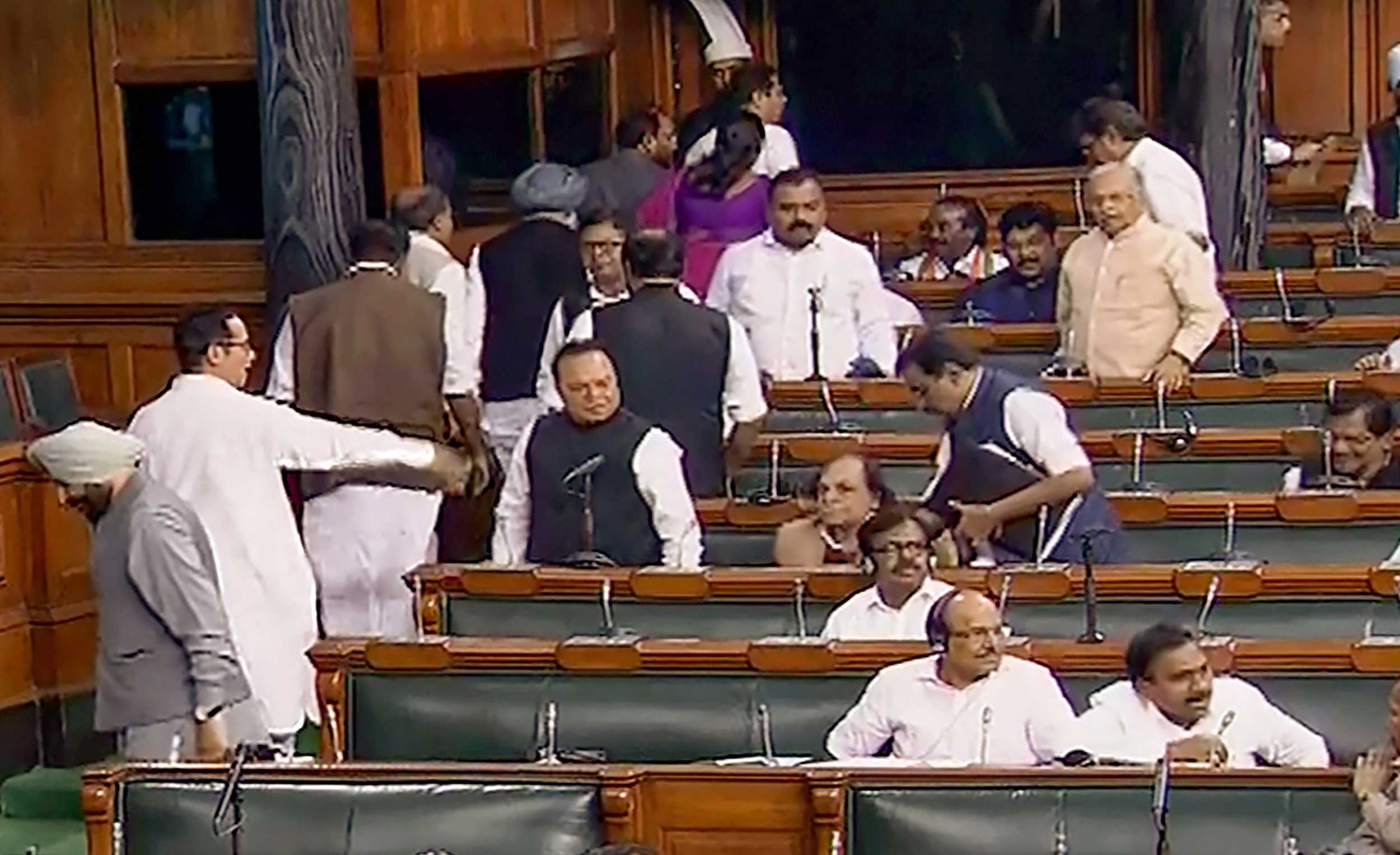 Congress and IUML party MPs walkout from the Lok Sabha in New Delhi on Wednesday. When the Delhi riots were being discussed in Parliament, the Sena did not join the Congress and other Opposition parties in pinning responsibility on Union home minister Amit Shah, leave aside demand his resignation.
(PTI)
J.P. Yadav   |   New Delhi   |   Published 12.03.20, 08:43 PM

The Shiv Sena, which leads a coalition government in Maharashtra along with the Nationalist Congress Party and the Congress, has been refraining from any kind of association with the national Opposition on the floor of the Lok Sabha, chartering an independent line.

On Wednesday when the Delhi riots were being discussed in Parliament, the Sena did not join the Congress and other Opposition parties in pinning responsibility on Union home minister Amit Shah, leave aside demand his resignation.

The Congress and the NCP, however, took an aggressive line on the central government, and home minister Shah in particular, and sought his resignation.

Participating in the debate, senior Sena MP Vinayak Bhaurao Raut kept on highlighting the failure of the intelligence agencies, police and other institutions in controlling the riots but never for once took the name of Shah, who as home minister is directly responsible for law and order in Delhi.

“It was very unfortunate that the riots were taking place when the most powerful leader of the US, President Donald Trump, was in India,” Raut said, stressing that India’s image in front of the world had taken a beating.

The Sena MP wondered how the government had allowed the Shaheen Bagh protest against the new citizenship regime to intensify and continue. “In the initial days, only 50-60 were there at Shaheen Bagh. Slowly, how did it grow to 20-25,000? The government should have reined them in and not allowed rioters to infiltrate the protest,” Raut said.

Contacted later, Raut said the Sena’s alliance with the Congress-NCP was limited to Maharashtra, and that the party would chooses its own line at the Centre.

According to Raut, the Sena had decided not to seek the resignation of Shah over the Delhi riots, rather focus on the failure of intelligence and other agencies.

Raut, however, made it clear that there was no strain in the relations of the three Maharashtra allies.

The Sena appears to be taking a middle-of-the-road approach like some other Opposition parties, notably the Odisha-based Biju Janata Dal, maintaining distance from both the Treasury and the Congress benches.

Maharashtra chief minister and Sena chief Uddhav Thackeray recently visited Ayodhya and pledged Rs 1 crore on behalf of his party for the construction of a Ram temple, underlining that his commitment to Hindutva remained firm despite the severance of ties with the BJP.

Unlike the Sena, the BJD, despite its policy of maintaining equidistance from the BJP and the Congress, took a firm stand in the Lok Sabha on the Delhi riots. BJD House leader Pinaki Misra urged the government to include Muslims in the Citizenship Amendment Act to show that the administration cares for them.

“Nobody is asking the government to take back the CAA because the CAA is a beneficial bit of legislation, we believe, and that is why we supported it. But perhaps if it becomes inclusionary, think of including Muslims from countries in this region who were there in the minority. (This) will give them the feeling that the government is reaching out to them as well, that the government cares for them as well,” Misra said.