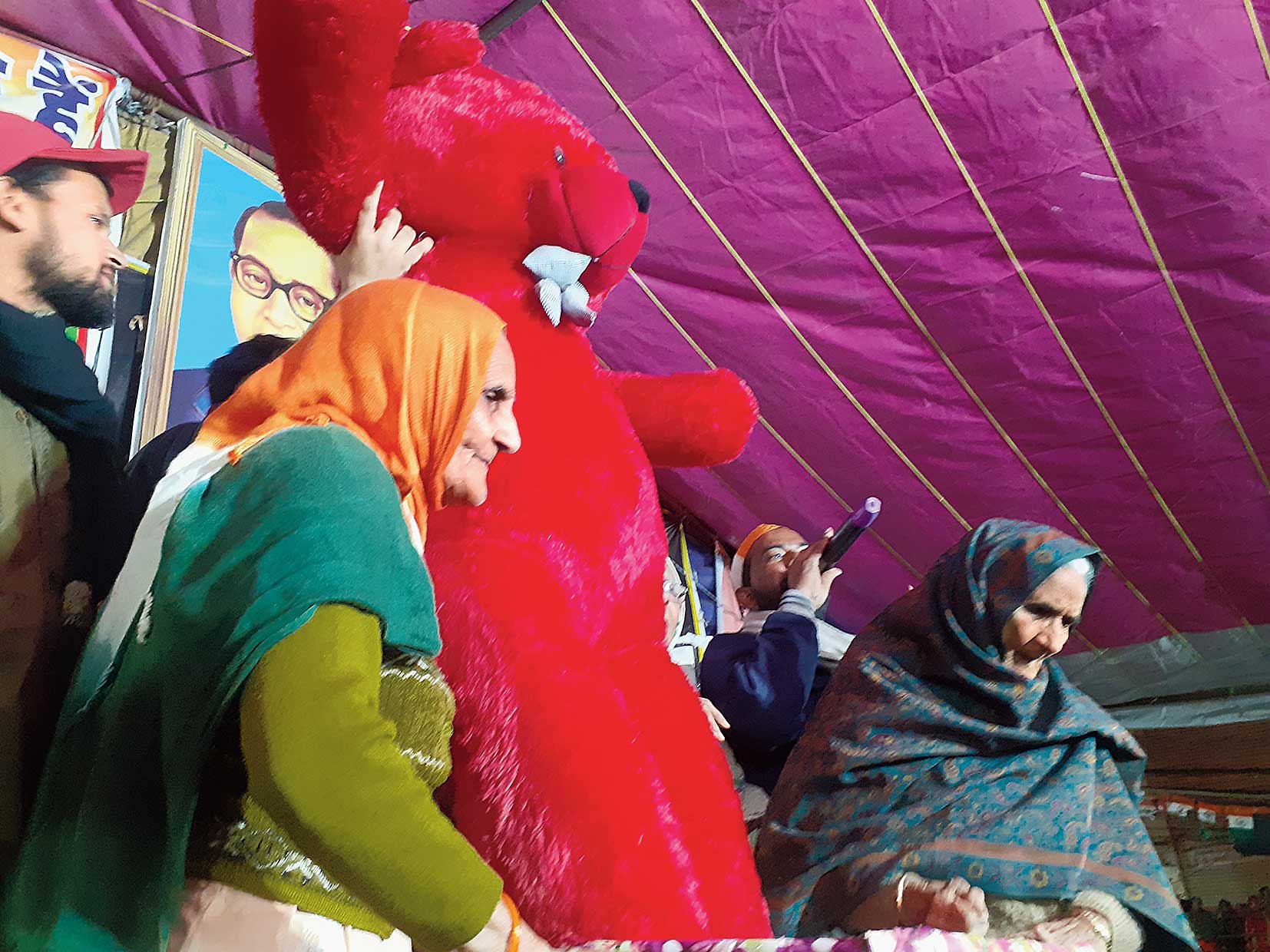 An amateur band without a name sang “Modi tum kab aaoge” at Shaheen Bagh. The protesting grannies, now known as “Dabangg Dadis”, unveiled a large red teddy bear holding a placard with the same appeal on the eve of Valentine’s Day.

Shaheen Bagh, where the vigil against the new citizenship regime has clocked 60 days, is on tenterhooks, waiting for a plea against the sit-in to be heard in the Supreme Court on Monday.

Still, the protesters celebrated Valentine’s Day to reinforce their message of peace and amity.

The celebrations took place a day earlier for the same reason that the newly elected AAP government postponed its oath-taking ceremony — the first anniversary of the Pulwama terror attack in which 40 CRPF jawans were killed also falls on February 14. Those at the vigil will mark February 14 as a day of remembrance for the Pulwama victims.

On Thursday, the band of young professionals from Delhi and its vicinity performed the song “Modi tum kab aaoge” to a rapturous audience.

Just before the performance at the Shaheen Bagh tent, a couple of youths tried to replace a pink banner marking Valentine’s Day with a banner on the Pulwama terror attack.

The others prevailed on the youths not to change the banner. The women protesters kept cheering the band on as they sang: “Mahilaon ka nara hai, Bharatvarsh hamara hai. Nahi sahenge, datte rahenge, yeh kala kanoon hatao (The slogan of women is that India is ours. We won’t tolerate, we won’t quit, remove this black law).”

So catchy was the tune that the band repeated their performance on public demand.

Lyricist Farhan Aqeel, a marketing professional in Gurgaon, explained that the band’s song conveyed the message that the demand for the government to talk to the women at Shaheen Bagh was reasonable.

Aqeel told The Telegraph: “At least talk. That’s the appeal. The accountability is with the government. The lyrics are easy. As a gimmick, we have the teddy bear. The women just want him (Modi) to come and accept their gift and talk to them about this law we believe is unconstitutional.”

The organisers spoke to several people in the neighbourhood before the performance to allay fears of any indecorous conduct.

“Tum kab aaoge is also a polite invitation to those who make snide remarks about people who go to Shaheen Bagh. Come and see for yourself,” Sana Amir, a journalist and one of the vocalists, told this paper.

Nunissa, 70, who clapped and tried to sing along, told this newspaper: “Whether Modi comes or not, I am happy that the children are singing. We should always spread love and brotherhood. If the Prime Minister removes this law, everyone will only have respect for him. Had the Prime Minister been working very well, he would not have lost Delhi. He should listen to us once.”