Aishe Ghosh, an MPhil student of international studies from Durgapur, has won 2,069 of the 5,050 votes officially counted 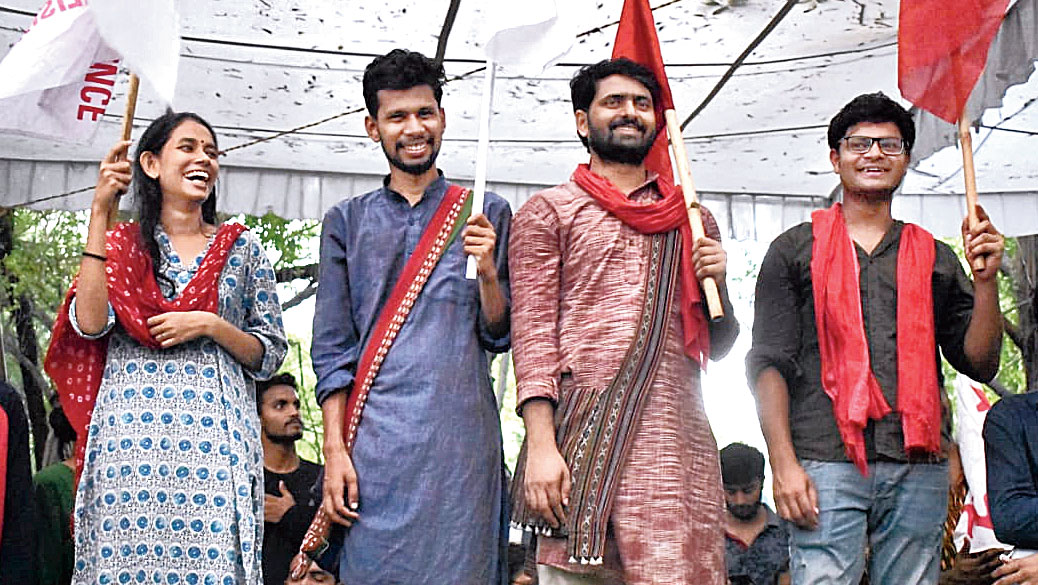 The CPM-backed Students Federation of India is set to regain the president’s post at the Jawaharlal Nehru University students’ union after 13 years.

Aishe Ghosh, an MPhil student of international studies from Durgapur, has won 2,069 of the 5,050 votes officially counted.

With 712 more votes to be tallied, Ghosh already has a 1,000-plus lead over nearest rivals Jitendra Suna of the Birsa Ambedkar Phule Students Association (Bapsa), who has 985 votes, and Manish Jangid of the Sangh-backed Akhil Bharatiya Vidyarthi Parishad, who has 981.

Vice-presidential nominee Saket Moon of the DSF has the highest lead of 3,000-plus votes. The voting took place on Friday.

Although all the 5,762 votes cast for the four main posts have been counted, the announcement of the tallies was stopped at 5,050 votes.

Delhi High Court has stayed the declaration of the final results until it decides on the pleas of two students, one of whom has alleged that students from the smaller academic centres on the campus are not represented in the council while the other has challenged the rejection of his nomination form.

The next hearing has been fixed for September 17.

The Left is expected to be the largest group in the 43-member students’ council, followed by the Congress-backed National Students Union of India, whose votes have almost doubled from last year. The NSUI is in alliance with the Indian Union Muslim League’s student arm, the Muslim Students Federation.

Ghosh, if allowed to assume office by the high court, faces the uphill task of leading a union that was disallowed from decision-making bodies by the university administration for most of last year.

She said she had been influenced by the activism of CPM labour arm Citu at the Damodar Valley Corporation, where her father works, and had joined the SFI during her undergraduate days at Delhi University’s Daulat Ram College.

“I am inspired by the Left, which is the only force that continues to raise people’s issues despite electoral setbacks. At a time when others have given up, the Left’s student, peasant and trade union fronts have not backed down. While the ruling party tries to buy everyone, they are unable to buy the Left,” she told The Telegraph.

Bapsa’s alliance this year with the Fraternity Movement, linked to the Jamaat-e-Islami Hind, has seen its votes almost double.

Fraternity general secretary candidate Waseem R.S. told this newspaper: “The Left’s idea of JNU (reflects) its nostalgia for the ’70s and ’80s, which is a Brahmanical idea. We have created a new political space for social justice politics that is only bound to increase in the coming years.”

The ABVP, which has won around a fifth of the votes declared, has witnessed a dip of around five percentage points in its vote share going by the votes tallied so far.

ABVP vice-presidential candidate Shruti Agnihotri told reporters: “We need to counter the Left propaganda more effectively. Although we have facts in our favour, our message has not reached students as widely as the Left propaganda.”

The Left has faced the brunt of the ABVP’s accusations of “anti-national slogans”, and the two groupings have had violent clashes during campaigning in Delhi University and JNU this year.

JNU with its 8,699 students has been a stepping stone for several politicians, especially from the communist parties, since the 1970s.

Dhananjay Tripathi was the last president from the SFI, elected in 2006. After police firing killed peasants protesting land acquisition in Nandigram in CPM-ruled Bengal the following year, the group was displaced as the dominant student front at JNU. Sandeep Singh of Aisa was elected president that year.

The SFI split on the campus in 2012, with most of its members forming the DSF in protest against the CPM’s offer of support to Pranab Mukherjee’s candidature for President of India.

Rivals Aisa and SFI first aligned in 2016, with the DSF and the AISF joining them in subsequent elections, all of which the Left swept.

This year, the three moderate Left groups forced Aisa to leave the president’s post for Ghosh, a two-time councillor who is seen as the most popular Left face on the campus.