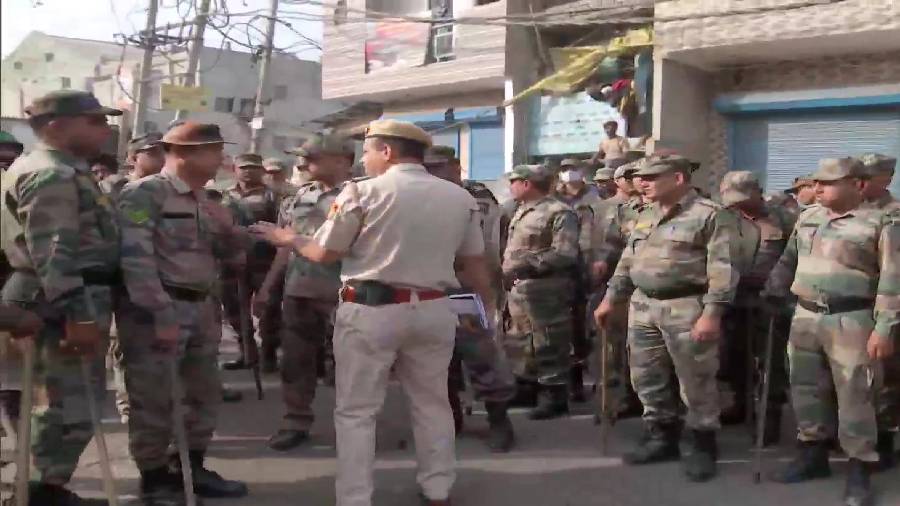 A minor road accident led to a communal clash in Gujarat's Vadodara city, with rioters throwing stones, vandalising a shrine and damaging some vehicles, police said on Monday adding that three persons were injured.

Police have so far arrested 22 people- 19 for rioting after the incident that occurred late Sunday night and three others in connection with the road accident involving two-wheelers, officials said. Three persons were injured in the clash, Additional Commissioner of Police Chirag Koradia told reporters.

A Karelibaug police station official said that the clash broke out following a road accident involving two-wheelers belonging to people from two communities in the city's Raopura locality.

The matter escalated and in no time people from two communities gathered and hurled stones at each other in the Karelibaug locality, neighbouring the Raopura area.

A mob vandalised the idol at a shrine located on the roadside, two autorickshaws and as many two-wheelers, the police official said.

Two separate FIRs were registered at Raopura and Karelibaug police stations for the accident and rioting, respectively, and a total of 22 persons arrested so far, Koradia said.

Various sections of the Indian Penal Code for rioting, unlawful assembly, holding deadly weapons, defiling the place of worship with intent to insult the religion of any class have been invoked in the Karelibaug FIR against a group of named and unidentified accused.

"All the 19 persons named in the Karelibaug FIR for rioting were arrested during the combing operation carried out last night. Efforts are on to nab the unidentified accused," Koradia said.

Also, out of 8-10 accused against whom an FIR was lodged at the Raopura police station related to the road accident, three were nabbed, he said.

Security has been beefed up in the area and the situation is under control now, he added.

"Two companies of the State Reserve Police (SRP) personnel have been deployed in sensitive areas and patrolling increased under all police stations. The situation is under control," he said.

Veraval: Thirty persons were arrested in connection with a saffron flag being placed atop a dargah in Verawal town in Gujarat's Gir Somnath during an unauthorised Hanuman Jayanti procession on Saturday, a senior police official said on Monday.

The incident took place at Magrebisha Bapu dargah in Vakhariya Bazar area here, and several of those involved had also taken mobile phone videos of the act and circulated them on social media, Gir Somnath Superintendent of Police Manoharsinh Jadeja said.

"After the videos went viral, people from both communities started gathering on Saturday night. However, police arrived at the site quickly, dispersed the crowd and took control of the situation. A flag march was also held in sensitive areas in the vicinity," the SP said.

"Two FIRs were registered on Sunday. One under IPC sections 153A (promoting enmity between two communities) and section 295A (outraging religious feelings), while the other was under section 188 for taking out a procession without permission," Jadeja said. Based on videos of the incident, eight people were arrested for allegedly putting a flag atop the dargah, while 22 people have been held for organising the Hanuman Jayanti procession without permission from authorities, he added.

Delhi clashes: None will be spared, says police chief