Advertisement
Home / India / Bilkis Bano case: Rights groups protest against release of convicts
'You have let down every woman in the country'

Around 6,000 individuals and institutions endorse a statement asking the Supreme Court to undo the remission, saying justice from courts had been undone 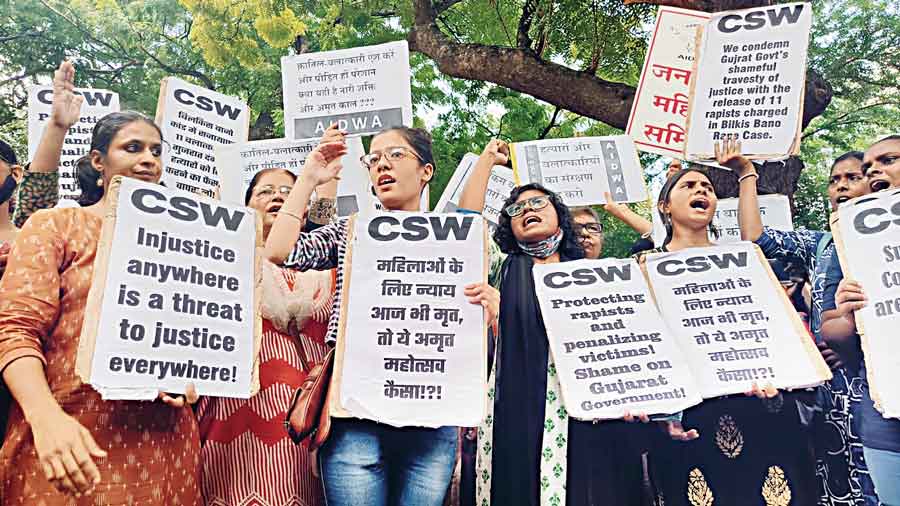 Women’s groups protest on Jantar Mantar Road on Thursday against the release of the 11 gang-rape and massacre convicts who were serving life sentences in the Bilkis Bano riots case of 2002.
Centre for Struggling Women
Pheroze L. Vincent   |   New Delhi   |   Published 19.08.22, 03:40 AM

Several rights groups on Thursday protested against the release of 11 convicts sentenced to life for gang rape and murder in the Bilkis Bano case, telling the government “you have let down every woman in the country”.

Around 6,000 individuals and institutions, including the National Alliance of People’s Movements, women’s groups and mass organisations of Left parties endorsed a statement asking the Supreme Court to undo the remission and saying that the justice from the courts had been undone.

Left women’s groups demonstrated on Jantar Mantar Road, condemning the release as well as the welcome accorded to the convicts after they were freed.

A pregnant Bilkis was gang-raped during the 2002 Gujarat riots and seven members of her family, including her three-year-old child, were killed.

The release of the 11 men was executed under the Gujarat government’s remission policy, following which the convicts were felicitated by Hindutva groups.

Among the critics was the Bharatiya Muslim Mahila Andolan, which had waged the legal battle against the triple talaq, a practice whose criminalisation the BJP tom-toms as an achievement for its government.

“The Prime Minister’s call for Nari Shakti and women power is meaningless in front of this shocking remitting of the life… sentence for the rapists,” a statement from the Andolan said.

“This act of setting the culprits free is in violation of the Centre’s guidelines on remission. It invokes ethical questions over the state showing compassion for the accused whilst the woman who suffered unspeakable brutalities is left emotionally and mentally scarred for her lifetime.

“This act is a huge setback for several Nirbhayas across the country who are awaiting justice in matters of brutal sexual assaults and murders. This act would cripple women’s fight for justice in all matters of sexual violence. It would embolden those indulging in gruesome crimes against women and children that they can get away under the loophole of remission.

“The Centre must prevail upon the Gujarat government to withdraw the order and revoke the remission. The accused must serve life-term as required by the HC verdict.”

The People’s Union for Civil Liberties demanded that the remission be revoked, the survivor be protected, the Centre and the Gujarat government be held accountable for “abuse of power”, and the remission process be put in the public domain.

The Union said: “While PUCL is supportive of the remission of sentences, at the same time it cannot be done in a discriminatory manner, and especially in heinous crimes such as this one and that too without ascertaining and establishing full support and safety structure for victims.”

The statement by the 6,000 individuals and institutions said: “To those who facilitated the release of 11 murderers and gang-rapists in contravention of the law of the land, we say this: You have let down every woman in the country. Made us more unsafe, more threatened and more at risk of violation.”

The welcome the rapists and murderers received after they were released from jail is a slap in the face of a just society, Telangana Rashtra Samiti MLC Kavitha said.

In a series of tweets in Hindi, Kavitha said: “The welcome the rapists and murderers received, after their release from jail, from some people who follow a certain ideology is a slap in the face of a just society. It is imperative to stop this extremely dangerous tradition before it takes the form of a legacy.”

She added: “The BJP government in Gujarat has displayed insensitivity by releasing the rapists of the then five months pregnant Bilkis Bano and the murder of her three-year old child. This is not only against the law but goes against humanity. Being a woman I can feel the pain and fear experienced by Bilkis Bano.”

Requesting the Supreme Court’s intervention and immediate action, Kavitha said: “This shameful decision must be withdrawn immediately so that citizens don’t lose their faith in law and there are no more cases like the Nirbhaya case and no lady has to go through what Bilkis Bano suffered.”