Advertisement
Home / India / Are you not ashamed of such politics: Rahul Gandhi attacks PM on BJP's 'support' to rape accused
Cong leader expresses ire at release of Bilkis convicts

Are you not ashamed of such politics: Rahul Gandhi attacks PM on BJP's 'support' to rape accused 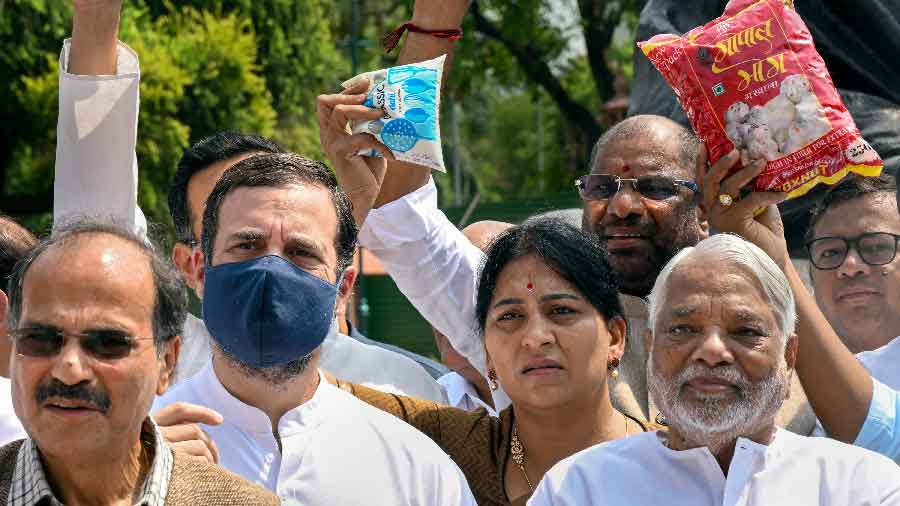 The BJP's support to criminals displays the party's mindset towards women, Congress leader Rahul Gandhi alleged on Thursday and asked Prime Minister Narendra Modi if he was ashamed of "such politics".

He cited the examples of rape cases in Unnao and Hathras in Uttar Pradesh, Kathua in Jammu and Kashmir and now Gujarat where the government this week released those convicted of rape and murder in the 2002 Bilkis Bano case.

"Are you not ashamed of such politics, Prime Minister ji," he asked.

In a tweet in Hindi, the Congress said on its official handle, "By waiving the punishment of the culprits of gangrape and murder, the BJP government of Gujarat has inflicted such pain on the entire civilized society including Bilkis Bano and her family, that cannot be repaired."

Discussing the release of the Bilkis Bano case convicts, senior Congress leader P Chidambaram added that two BJP MLAs were part of the review panel that granted them remission.

"There is an interesting side story to the grant of remission to 11 persons convicted for gang rape in Gujarat. Among the Review Panel were two BJP MLAs Shri C. K. Raolji and Smt Suman Chauhan!

"Another member was Shri Murli Mulchandani who was a key witness for the prosecution in the Godhra Train burning case!" he alleged on Twitter.

He asked whether this was a neutral, non-partisan panel of experts in criminology and penology and said the district collector was the chairperson.

Gandhi and his Congress party have been attacking the BJP and the prime minister for releasing the rapists in the Bilkis Bano case by granting them remission.

Eleven convicts, sentenced to life imprisonment, walked out of the Godhra sub-jail on August 15 after the Gujarat government allowed their release under its remission policy. They had completed more than 15 years in jail.

A special Central Bureau of Investigation (CBI) court in Mumbai on January 21, 2008, had sentenced the 11 to life imprisonment on charges of gangrape and murder of seven members of Bilkis Bano's family. Their conviction was later upheld by the Bombay High Court.

Bilkis Bano was 21 years old and five months pregnant when she was gangraped while fleeing the violence that broke out after the Godhra train burning. Among those killed were her three-year-old daughter.