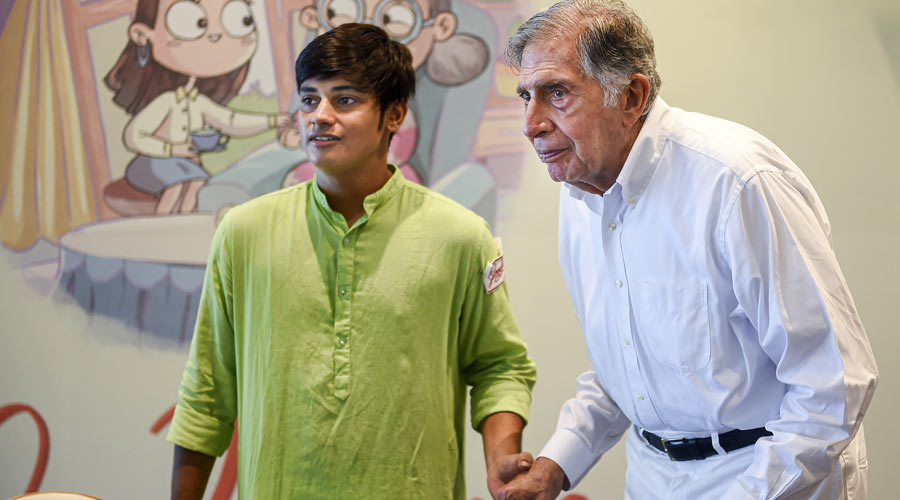 Industry leader Ratan Tata on Tuesday announced an undisclosed investment into startup Goodfellows that offers companionship to senior citizens as a service.

The octogenarian industrialist has been an active backer of startups ever since retiring from the helm of the salt-to-software Tata Group and has invested in over 50 companies till now.

The latest investee company is founded by Shantanu Naidu.

Thirty-year-old Naidu, a Cornell University alumnus, is a general manager in Tata's office and has been assisting him since 2018.

He shares Tata's love for dogs and strays and this is his fourth outing as an entrepreneur, which includes a venture around pets.

"You do not know what it is like to be lonely until you spend time alone wishing for companionship," the 84-year Tata, a bachelor, said, appreciating Naidu's ideation and also forgiving his mentee for the time he spends away from the office.

Tata said no one minds getting old till you actually get old, and also added that getting good-natured companionship, which we take for granted, is a challenge.

Addressing the Tata Sons' Chairman Emeritus as a boss, a mentor and also a friend, Naidu said there are 15 million elders who are by themselves right now, which represents the opportunity for his newest venture.

The startup hires young graduates having the right skills of empathy and emotional intelligence to 'work' as the senior citizen clients' companions, and ease the day for them with any tasks or just talk with them.

Typically, a companion would visit a client three times a week, spending up to four hours per visit. The company charges Rs 5,000 as the base subscription fees for a month, after a month's free service.

The company has been working with 20 elders for the last six months in its beta phase in the financial capital and is planning to offer services in Pune, Chennai and Bengaluru next.

Naidu told PTI that he has developed a model with the help of psychologists to select the right candidate to act as a companion for a senior citizen. He said it wants to scale up across the country but would prefer to go slow without compromising on the quality of the companions it hires.

In a year's time, the company plans to have 100 registered companions serving about 350-400 senior citizens across the country, he said, stressing that unlike a conventional startup, which has milestones, Goodfellows will not be chasing business targets as hard till it is able to make the desired social impact.

He said the experience till now has suggested that the companions do a myriad of tasks with the clients, which may include playing carrom, reading the newspaper for them or even taking naps together.

Admitting that it is difficult to "fabricate" the bond between an elder and a grandchild, but exuded confidence that the diligence with which the companions will be hired will ensure that the authentic bonds can be formed.

Naidu called Tata an intuitive investor, who looks at the relevance of a business idea for a broader community or the society before backing a company, which is unlike a financial investor who comes for financial returns alone.

He said this would be among his last ventures and also made it clear that the top priority remains the responsibilities in Tata's personal office.

Tata said he would be delighted for this service to grow and mature into something which innovatively changes people's lives.