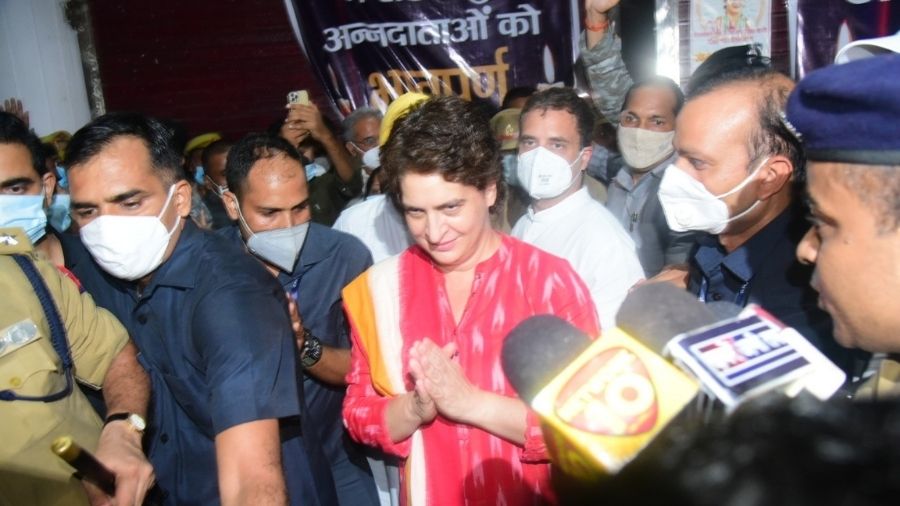 Congress's Rahul Gandhi and Priyanka Gandhi Vadra have reached UP's Lakhimpur Kheri and are meeting the family of 19-year-old Lovepreet Singh who died on Sunday, allegedly run over by a car driven by Union Minister Ajay Mishra's son.

Priyanka, who had been lodged at a guest house in Sitapur since her arrest on Monday, joined the Congress team, which was cleared for a visit  to meet the families of farmers.

Earlier Rahul Gandhi had a face-off with the UP police when he landed in Lucknow airport over transport arrangements. Mr Gandhi, who was accompanied by the Chief Ministers of Punjab and Chhattisgarh, refused to take the route or transport suggested by the police, saying,  "Who are you to arrange my transport? I want to leave in my car,"

Apart from the Congress team, AAP leaders Harpal Cheema, Raghav Chadha and others have met the relatives of the Nachhatar Singh, who was one of the farmers allegedly  mowed down by a vehicle driven by Union minister Ajay Mishra's son Ashish Mishra. Delhi Chief Minister Arvind Kejriwal has spoken to the family on phone.

The Supreme Court has taken suo motu cognizance of the events in Lakhimpur Kheri and the matter will be heard on Thursday by a bench led by Chief Justice NV Ramana.

Earlier today, junior home minister Ajay Mishra met his boss, Amit Shah, amid opposition demands for his dismissal over allegations that his son ran over the peacefully protesting farmers on Sunday.

Top government sources have ruled out the possibility of his resignation, saying he has clarified twice that he and his son were not present. "Yes his car was there and let a full investigation take place,"a source said.

Four people died on Sunday after a vehicle mowed down farmers who were protesting against the visit of the Union minister and the state's Deputy Chief Minister Kehsav Maurya. Another four were killed in the violence and arson that followed. Though Ajay Mishra has admitted the SUV belonged to him, he said he and his son were not present at the spot.

Three of the farmers who died on Sunday were cremated yesterday. The fourth farmer, Gurvinder Sngh, who was allegedly shot by the minister Ajay Mishra's son Ashish Misra, was cremated today after a second postmortem.