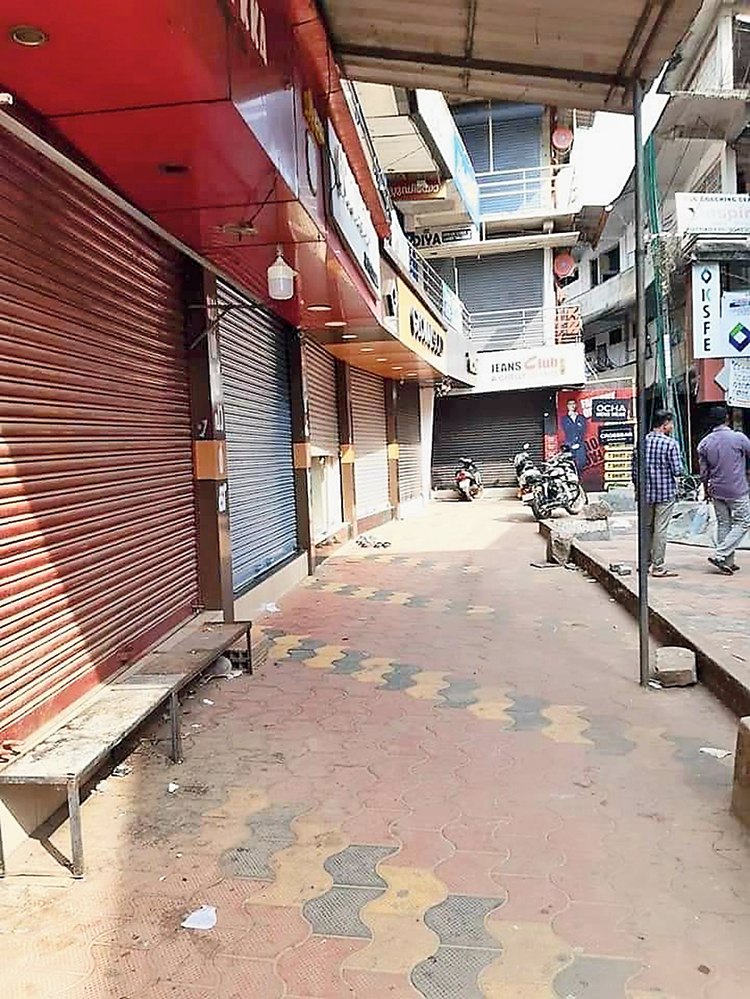 Prime Minister Narendra Modi should be relieved that he was not in north Kerala on Monday. The stunt he pulled in Bengal a day earlier, asking students to raise their hands in support of the citizenship matrix, would have literally fallen flat in the southern state unless he had bussed in his own cheerleaders.

For, almost everything was down in at least two towns in Kozhikode in Kerala, where the BJP held public meetings in support of the Citizenship Amendment Act (CAA).

Hundreds of shops downed shutters by 3pm before state BJP general secretary M.T. Ramesh arrived to address a public meeting in support of the CAA in Kuttiyadi town in Kozhikode on Monday.

Around the same time, a similar shutdown unfolded in Narikkuni, a nearby town, where BJP state vice-president and party-hopper A.P. Abdullakutty addressed a pro-CAA public meeting.

A state that has earned a name for churning out standout ways to oppose the CAA, Kerala was adding another innovation.

Both towns wore a deserted look as even autorickshaws and cabs stayed off the roads. With hardly any resident turning up for the BJP events, the party that had prior information about the boycott ferried supporters from other places.

“Of the 750 shops in Kuttiyadi, only around eight were open when the BJP meeting started,” V.V. Latheef, Kuttiyadi president of the powerful Vyapari Vyavasayi Ekopana Samiti (Traders’ and Industrialists’ Coordination Committee), told The Telegraph on Tuesday.

Those who kept their shops open for a few hours were office-bearers of the organisation.

“As office-bearers of the committee, some of us thought we should keep our shops open since the committee had not given the shutdown call,” Latheef said.

“After sometime, all of them started closing, leaving only me. So, I closed my shop at 5.15pm and opened only this morning,” he said. “All of us have our own individual opinions on political matters. So we could not stop traders from closing their shops,” he added.

Majeed Master, a social activist in Narikkuni, recounted a similar protest. “A huge majority of the shops were shuttered before the BJP meeting,” he told this newspaper. “The shops were closed from 2pm to 7pm. Many of them opened for business only today (Tuesday),” he said.

The shutdown in both places took place under the aegis of Constitution Protection Council, the secular democratic spearhead of anti-CAA protests that are going in the state since the act was passed.

A WhatsApp message that alerted the people in both places suggested: “We can boycott by staying away from the town and not even being onlookers at the their programme.”

The shutdown had debuted in the temple town of Ambalappuzha in Alappuzha district in southern Kerala before a pro-CAA public meeting by the BJP on Saturday.

The public meeting scheduled in Valanjavazhi, a CPM bastion in Ambalappuzha, was a disaster for the BJP as the small town witnessed a total shutdown.

“Not a single shop was open there at the time of the BJP’s meeting,” Valanjavazhi CPM local committee secretary D. Dileesh said. There, too, the hapless BJP dignitary was Ramesh, the general secretary who was greeted similarly in north Kerala on Monday.

“The protest was steered by Valanjavazhi Kootayma (fraternity) made up of all secular parties,” said Dileesh.

The Chaliyam River in Kozhikode district witnessed another unique protest as fishermen held a ‘Boat March’ against the citizenship law on Thursday.

With the Tricolour fluttering atop, over 50 fishing boats whipped up a spectacle watched by hundreds from the banks of the river. “We sailed from Chaliyam River to Feroke Bridge (a nearby place) and back. The idea was to convey our feelings in the best way we fishermen could,” said P.T. Rafi, one of the participants.