Protesters were, however, stopped by Delhi Police and not allowed to proceed towards Rashtrapati Bhawan 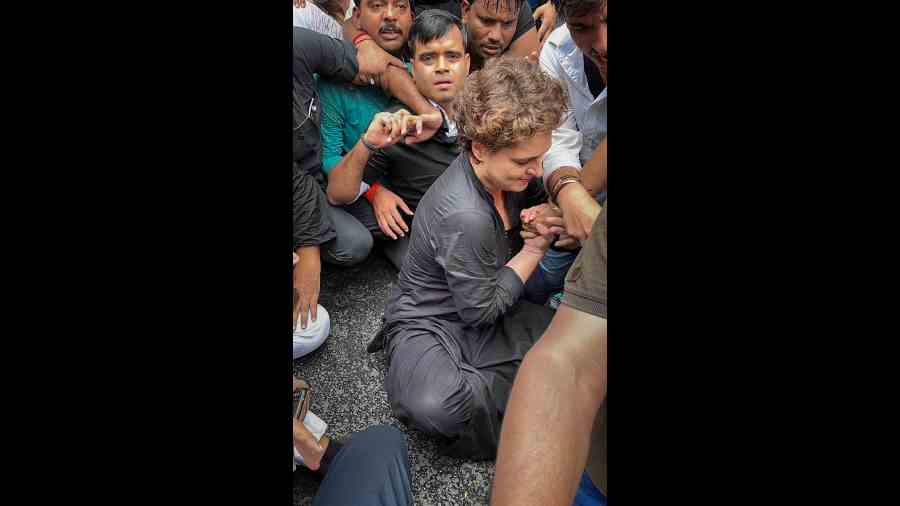 Congress leader Priyanka Gandhi Vadra staged a sit-in protest outside the AICC headquarters here on Friday as part of the party's nationwide stir against price rise, the GST hike on essential items and unemployment.

Dressed in black, as several other party members did to register their protest against the government, Priyanka Gandhi crossed the police barricades put up on the road outside the party headquarters and squatted on the road, with police personnel asking her to move from there as section 144 of the Code of Criminal Procedure (CrPC) is in force in the entire area of New Delhi district except Jantar Mantar.

The Congress general secretary was subsequently put in a vehicle forcibly by police and taken away.

Earlier in the day, wearing black clothes, Congress MPs, including former party chief Rahul Gandhi, staged a protest in the Parliament House complex and took out a march towards the Rashtrapati Bhawan.

The protesting MPs of the opposition party raised slogans against the government demanding that the Goods and Services Tax (GST) hike on essential items be withdrawn, with party chief Sonia Gandhi standing with the women MPs of the party holding a banner outside gate number 1 of Parliament.

The protesters were, however, stopped by the Delhi Police and not allowed to proceed towards the Rashtrapati Bhawan. Sonia Gandhi did not take part in the march. The other Congress MPs were detained by police at Vijay Chowk.