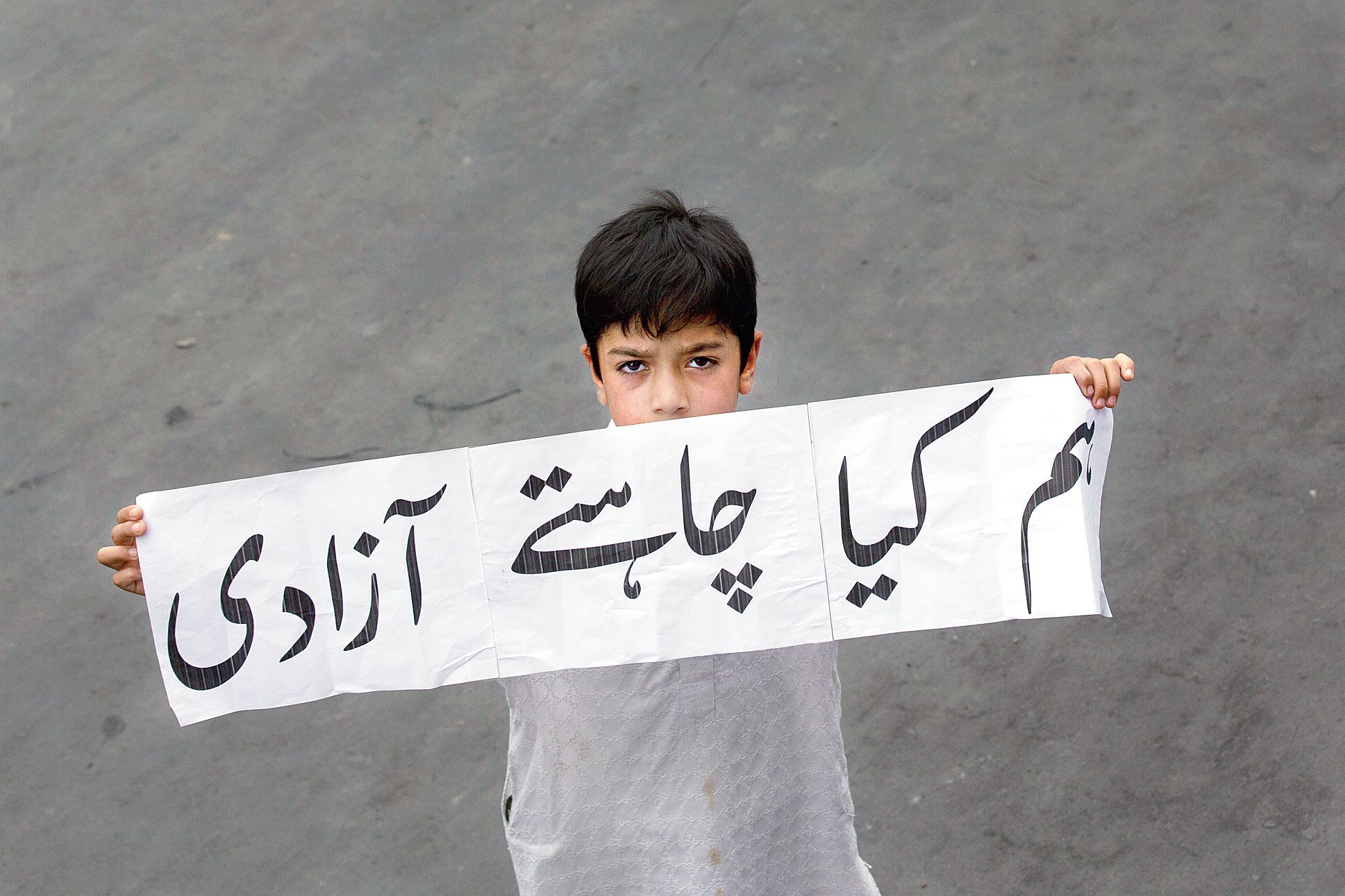 A Srinagar boy holds a banner that reads 'we want freedom'. The commission has also recommended to the US government targeted sanctions on Indian government agencies and officials responsible for severe violations of religious freedom by freezing their assets and/or barring their entry into the US.
(AP)
Anita Joshua   |   New Delhi   |   Published 28.04.20, 09:02 PM

India has suffered its harshest classification since 2004 from the bipartisan United States Commission on International Religious Freedom (USCIRF) that has cited events surrounding the citizenship thrust, the Babri verdict and lynchings.

The commission on Tuesday recommended that the US state department place India among the “Countries of Particular Concern” along with Pakistan, Saudi Arabia, Syria, Iran, China and eight other nations where governments engage in or tolerate particularly serious violations of religious freedom.

The response from the Indian foreign ministry — the “tendentious comments are not new” but the misrepresentation has reached “new levels” — suggests the recommendation has rubbed salt into a wound already weeping from the backlash in West Asia over the Covid profiling of Muslims.

India has for several years — pre-dating the Narendra Modi era — been a Tier 2 country, placed on the “Special Watch List”.

In 2003 and 2004, in the aftermath of the 2002 Gujarat riots, India had been listed among the “Countries of Particular Concern”. During that period too, the BJP had been in power at the Centre.

This time, two of the US panel’s nine commissioners wrote dissenting notes. The author of one, Gary L. Bauer, disagreed with “placing India in a gallery of rogue nations in which it does not belong”.

The independent USCIRF derives its existence from the US International Religious Freedom Act (IRFA). The act defines “Countries of Particular Concern” as those where the government engages in or tolerates particularly serious violations of religious freedom.

The commission has also recommended to the US government targeted sanctions on Indian government agencies and officials responsible for severe violations of religious freedom by freezing their assets and/or barring their entry into the US.

“India took a sharp downward turn in 2019. The national government used its strengthened parliamentary majority to institute national-level policies violating religious freedom across India, especially for Muslims,” the commission headed by the Republican Tony Perkins said in the introduction.

The panel referred to the Citizenship (Amendment) Act and the National Register of Citizens.

“Most notably, it enacted the Citizenship (Amendment) Act, which provides a fast track to Indian citizenship for non-Muslim migrants from Afghanistan, Bangladesh and Pakistan already residing in India. According to government officials’ statements, this law is meant to provide protection for listed non-Muslim religious communities — but not for Muslims — against exclusion from a nationwide National Register of Citizens and the resulting detention, deportation, and potential statelessness.

“The national and various state governments also allowed nationwide campaigns of harassment and violence against religious minorities to continue with impunity, and engaged in and tolerated hate speech and incitement to violence against them,” the USCIRF said.

The chapter on India dwells on the politics behind the CAA and takes note of Union home minister Amit Shah referring to migrants as “termites” and Uttar Pradesh chief minister Yogi Adityanath pledging revenge against those protesting the new citizenship law.

“Indeed, Home Minister Amit Shah referred to migrants as ‘termites’ to be eradicated. Troubled that Hindus were excluded from Assam’s NRC, he and other BJP officials advocated for the CAA as a corrective measure to protect Hindus,” the USCIRF said.

The report takes note of lynchings in BJP-ruled states, the clampdown in Kashmir and the Delhi riots during the visit of US President Donald Trump to India in February.

“Throughout 2019, government action — including the CAA, continued enforcement of cow slaughter and anti-conversion laws, and the November Supreme Court ruling on the Babri Masjid site — created a culture of impunity for nationwide campaigns of harassment and violence against religious minorities,” the commission said.

Bauer, who gave the dissent note, conceded that the “trend line on religious freedom in India” is not reassuring. But his contention was that “India is not the equivalent of Communist China, which wages war on all faiths; nor of North Korea, a prison masquerading as a country; nor of Iran, whose Islamic extremist leaders regularly threaten to unleash a second Holocaust”.

Indian external affairs ministry spokesperson Anurag Srivastava said: “We reject the observations on India in the USCIRF annual report. Its biased and tendentious comments against India are not new. But on this occasion, its misrepresentation has reached new levels. It has not been able to carry its own commissioners in its endeavour. We regard it as an organisation of particular concern and will treat it accordingly.”