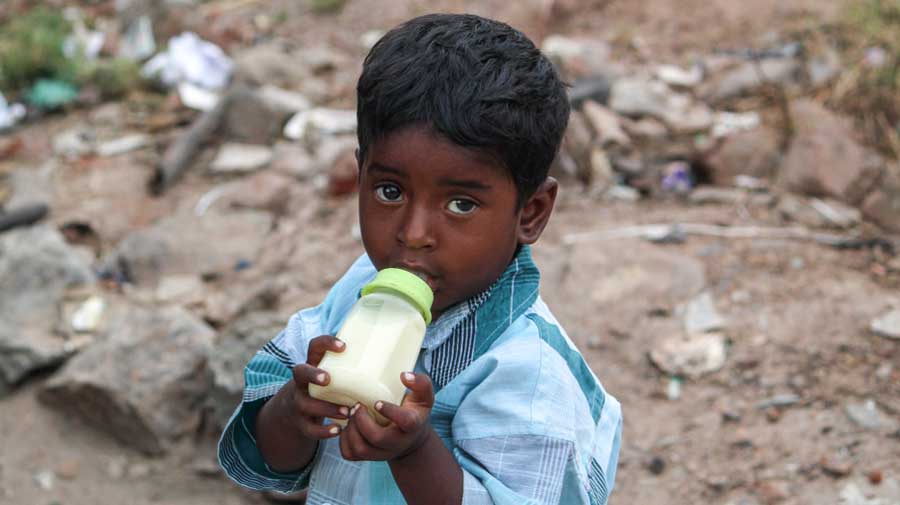 Activists and researchers on Wednesday expressed dismay at the poor budget allocations for child-nutrition schemes such as the Integrated Child Development Services (ICDS) and school midday meals, and for pension schemes under the National Social Assistance Programme.
Shutterstock
Basant Kumar Mohanty   |   New Delhi   |   Published 04.02.21, 12:42 AM

The Centre has cut funds to a key child-nutrition scheme in its budget proposals for this financial year despite a recent national survey revealing a rise in the proportion of children with low weight and stunting.

Activists and researchers on Wednesday expressed dismay at the poor budget allocations for child-nutrition schemes such as the Integrated Child Development Services (ICDS) and school midday meals, and for pension schemes under the National Social Assistance Programme.

Under the ICDS, the government runs nearly 13.79 lakh Anganwadi centres where children aged four to six are provided nutritional support apart from care and education.

The government had allocated Rs 20,532 crore in the 2020-21 budget for Anganwadi services, which was later revised downwards to Rs 17,252 crore. For 2021-22, the government has earmarked only Rs 20,105 crore for the scheme while clubbing it with additional schemes. (See chart)

Deepa Sinha, an activist, said: “Children have once again been neglected in the budget. Saksham Anganwadi and Poshan, which are together a bigger scheme than only the Anganwadi scheme, have received less funds than was allocated to the Anganwadi scheme alone last year.”

The Poshan Abhiyan, also known as the National Nutrition Mission, is an overarching nutrition scheme for children, pregnant women and lactating mothers.

Last financial year’s combined budget allocation for all these schemes and the Anganwadi programme was, therefore, Rs 24,557 crore, which is 22 per cent higher than this year’s Rs 20,105 crore.

The Right to Food Campaign, an organisation campaigning for food security, expressed disappointment at the budget allocations for the nutrition schemes.

Economist Jean Dreze, a visiting professor with Ranchi University, said this was the second time in the past six years that the ICDS scheme had witnessed a decline in funding.

For the midday meal scheme, under which free meals are provided in school to every child between Class I and VIII, the allocation has been reduced from the revised estimate of Rs 12,900 crore for 2020-21 to Rs 11,500 crore for 2021-22.
The National Social Assistance Programme, under which the Centre provides a monthly pension to 2.6 crore widows, elderly people and people with disabilities, too has witnessed a cut in allocation compared with the revised budgetary estimate for 2020-21.

Dreze said: “The earnings of workers in the informal sector have gone down by half after the lockdown. All kinds of services are affected. The need was to put money in people’s hands to stimulate the economy. But no such announcement was made.”

According to Phase I of the National Family Health Survey-5, several states have witnessed a worsening of child malnutrition indicators, such as low weight and stunting, between 2015-16 and 2019-20.

Activists have demanded universal subsidised food under the public distribution system and the immediate revival of hot cooked meals under the ICDS and midday meal programmes.

Since the lockdown, food grains and money are being provided to the children’s guardians instead of cooked meals, reviving which will require schools and Anganwadi centres to reopen at least for the meals.

Activists have demanded that the budgets for these nutrition programmes provide for eggs in the meals. They have said that hot cooked meals should be provided to children under three years through crèches and to pregnant and lactating women through community kitchens.

They have asked the Centre to increase its contribution towards the social security pensions to at least Rs 2,000 a month.

The Centre’s monthly contribution towards these pensions now ranges between Rs 200 and Rs 500. Some of the states top this up with their own money.