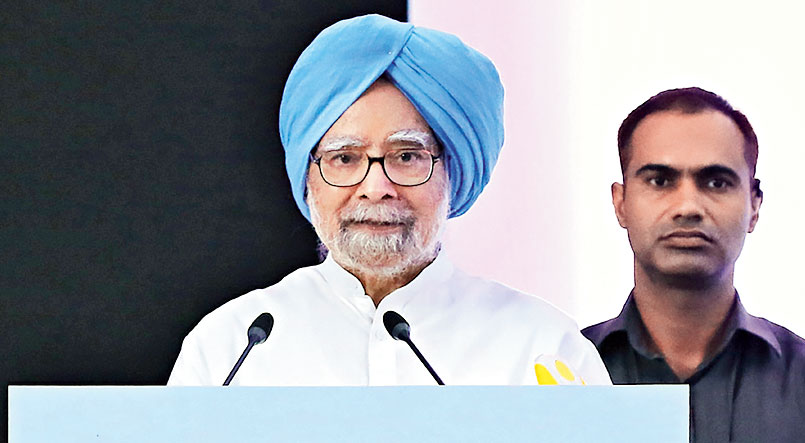 “A nation’s state of the economy is also a reflection of the state of its society. An economy is a function of the numerous exchanges and social interactions among the people and institutions. Mutual trust and self-confidence are the bedrock of societal transactions that fosters economic growth. Our social fabric of trust and confidence is now torn and ruptured,” the former Prime Minister told a conclave at Jawahar Bhawan.

Pointing out that “the state of our society is even more worrying and that is a fundamental reason for the precarious state of our economy”, Singh clarified that he was speaking largely as a concerned citizen and as an economist, without being influenced by political considerations.

The thrust of his argument was that peace and harmony were as essential for economic activity as sound policy-making, which decisions like the demonetisation did not reflect. Singh had made the same observations in a newspaper article recently but the iteration came on a day statistics seemed to bear him out.

“This toxic combination of deep distrust, pervasive fear and a sense of hopelessness in our society is stifling economic activity and hence economic growth. India is now a $3-trillion global economic powerhouse driven largely by private enterprise. It is not a tiny command and control economy that can be bullied and directed at will. Nor can it be managed through colourful headlines and noisy media commentary,” Singh added.

Singh said: “Shooting down messengers of bad news or shutting off economic reports and data is juvenile and does not behove a rising global economic powerhouse. No amount of subterfuge can hide the performance and analysis of a $3-trillion market economy of 1.2 billion people. Economic participants respond to social and economic incentives, not to diktats or coercions or public relations.”

The widely respected economist explained: “It is my belief that mere changes in economic policy alone will not help revive the economy. We need to change the current climate in our society from one of fear to one of confidence for our economy to start growing robustly again. There is a palpable climate of fear in our society today. Many industrialists tell me they live in fear of harassment by government authorities.”

Singh added: “Bankers are reluctant to make new loans for fear of retribution. Entrepreneurs are hesitant to put up fresh projects for fear of failure, attributed to ulterior motives. Technology start-ups that are an important new engine of economic growth and jobs, seem to live under a shadow of constant surveillance and deep suspicion. Policy makers in government and other institutions are scared to speak the truth or engage in intellectually honest policy discussions. Public trust in independent institutions such as the media, judiciary, regulatory authorities and investigative agencies has been severely eroded.”

Regretting that the policy doctrine was based on suspicion of every industrialist, banker, policy maker, regulator, entrepreneur and citizen, Singh said: “The government has positioned itself as some saviour, resorting to foolhardy moral-policing policies such as the demonetisation that have proved disastrous. For economic growth to revive, it is very important that the government enthuses trust and confidence. It is very important for businessmen, capital providers and workers to feel confident and exuberant rather than being fearful and nervous. This is possible only if the government sheds its current doctrine and begins to trust India’s farmers, India’s entrepreneurs and India’s citizens at large.”

He concluded his speech with a piece of advice for his successor: “With an absolute majority in the Lok Sabha and low global oil prices, this is a once-in-a-generation economic opportunity to catapult India to the next phase of economic development and create new jobs for hundreds of millions of our youth. I urge the Prime Minister to set aside his deep-rooted suspicion of our society and nurse us back to a harmonious, confident and mutually trustworthy society that can revive the animal spirits and help our economy soar.”