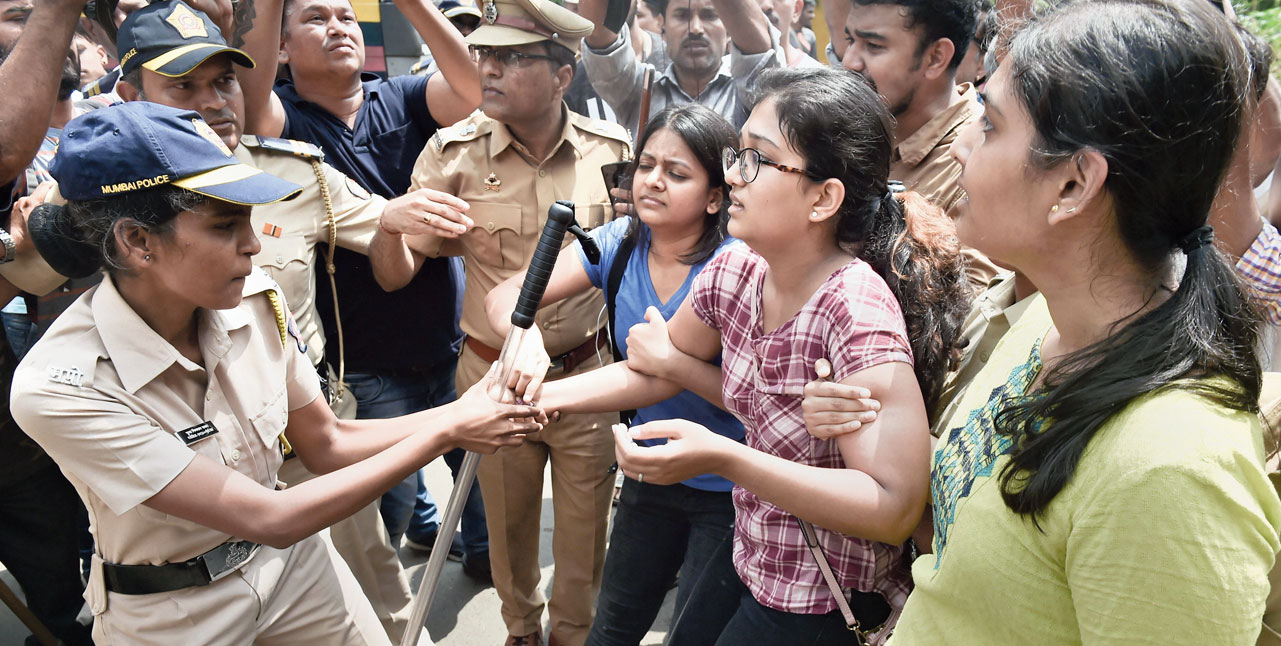 Dalit leader Prakash Ambedkar was on Sunday detained when he tried to enter the Aarey Colony in Mumbai in support of the activists who are opposing the cutting of trees in the area to make way for a metro car shed.

He alleged that the Maharashtra government was using 'muscle power' to silence those raising voice against tree felling.

The police on Saturday imposed Section 144 of the Criminal Procedure Code in Aarey, restricting movements and gathering of groups, and cordoned off the area.

When the Vanchit Bahujan Aghadi (VBA) chief reached the Aarey area located in suburban Goregaon on Sunday in support of those opposing tree felling, he was detained by police for a brief period.

Later, after being left off, he told reporters: 'The green cover at Aarey Colony helps in the purification of air, the same way as fresh breeze coming from the Arabian Sea helps in keeping air of Mumbai clean.'

Hitting out at the state government for using 'muscle power' to silence the activists opposing tree felling, he said the VBA extends its support to the cause of saving the Aarey forest.

'We were told that some 700 trees have been axed. We will continue to oppose the tree felling in all forms, even if we fail to come to power in the state after the upcoming Assembly elections,' he said.

On Saturday, clashes broke out between the police and green activists who tried to stop tree cutting by Mumbai Metro Rail Corporation Ltd (MMRCL) in Aarey Colony, leading to the arrest of at least 29 people.

The MMRCL started hacking trees from Friday night to make way for the car shed, hours after the Bombay High Court dismissed four petitions filed by NGOs and activists challenging the decision to allow felling of nearly 2,700 trees in the prime green lung of the city.

Some local tribals also opposed the tree cutting, claiming they were largely dependent on the Aarey forest for their livelihood.

Earlier, opposition parties slammed the ruling BJP- Shiv Sena, saying they failed to save the trees.

The MMRCL has defended tree felling by contending that it is restricted only to a small area in Aarey Colony and is necessary to ensure a modern transport system for Mumbaikars.

The proposed car shed for the Metro-3 line (Colaba- Bandra-Seepz) will occupy 33 hectares.