Physical classes in schools, colleges to resume from November 29 in Delhi

Government offices to open from Monday too, announces Gopal Rai 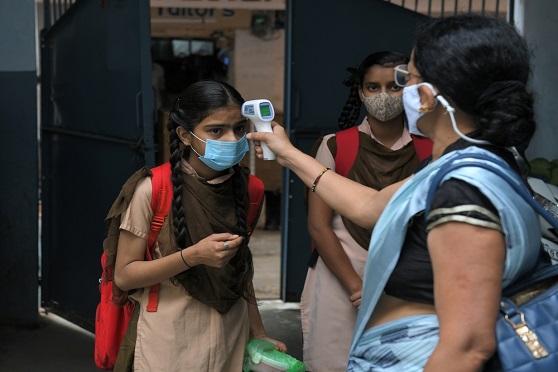 On November 13, the city government had ordered closure of all educational institutes in Delhi due to high air pollution levels.
File picture
Our Bureau, PTI   |   New Delhi   |   Published 24.11.21, 02:27 PM

In view of an "improvement" in the air quality, the Delhi government on Wednesday decided to resume physical classes in schools, colleges and other educational institutions and reopen government offices from November 29.

The ban on the entry of trucks, barring those engaged in essential services, will continue till December 3. However, "CNG and electric trucks will be allowed to enter Delhi from November 27," Environment Minister Gopal Rai said after a meeting to review curbs to tackle air pollution.

"We hired private CNG buses recently. We have decided to use them to ferry employees from colonies such as Gulabi Bagh and Nimri Colony. A majority of government employees live in these areas," he said.

The government will also start a shuttle bus service from the Delhi Secretariat to ITO and Indraprastha metro stations for its employees.

"The air quality has improved over the last three days. The city's AQI is similar to pre-Diwali days," he said.

On November 13, the city government had ordered closure of all educational institutes, banned construction and demolition activities and asked its employees to work from home to combat air pollution and minimise its health effects.

On November 17, it had extended the restrictions, besides banning the entry of trucks carrying non-essential items in Delhi.

The ban on construction and demolition activities was lifted on Monday in view of an improvement in the air quality and inconvenience caused to workers.

Rai said violation of the 14-point dust control guidelines at construction and demolition sites will lead to immediate termination of work and a penalty.

Authorities have stopped work at 105 out of the 1,221 sites inspected so far, the minister added.