Pakistan says it will release IAF pilot Abhinandan on Friday 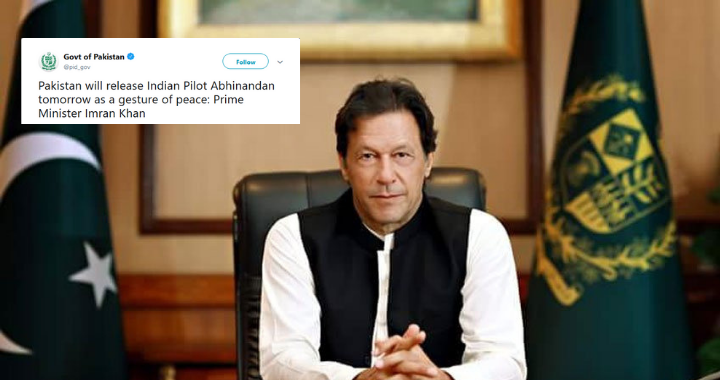 Pakistan has announced it will release of Wing Commander Abhinandan Varthaman from custody tomorrow as a 'gesture of peace'.

The announcement came from Pakistan Prime Minister Imran Khan in a joint session of Parliament on Thursday an hour after Pakistani foreign minister Shah Mehmood Qureshi said Khan was ready to talk to his Indian counterpart Narendra Modi to de-escalate Indo-Pak tension.

Khan's announcement in the Pakistan's Parliament was greeted by desk thumping by lawmakers.

IAF fighter pilot Abhinandan Varthaman had been captured yesterday while trying to drive away a Pakistani jet that had tired to enter Indian airspace.

The Indian MiG-21 Bison that Wing Commander Abhinandan was in crashed on the Pakistani side, and he was captured.

Yesterday, a video of him praising the treatment by Pakistani forces who saved him when he was being beaten up by villagers, did the rounds.