OUP to not print Indian edition of 'To Kill A Democracy' 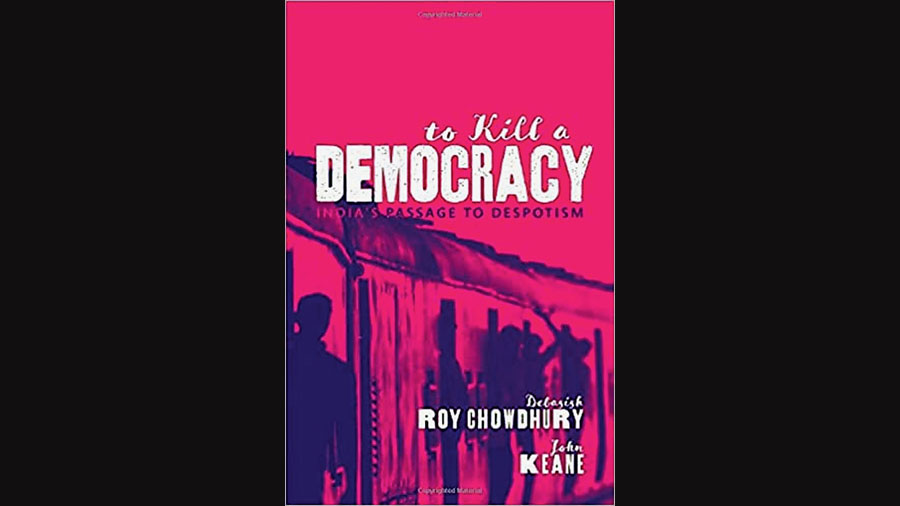 Oxford University Press (OUP) has decided not to print the Indian edition of To Kill A Democracy: India’s Passage to Despotism, the book’s authors have said.

“OUP has handed over the paperback rights to us and we hope to find an Indian publisher who will print and properly market our book here and make it widely available at an affordable price,” John Keane and Debasish Roy Chowdhury said in a joint statement to The Telegraph.

The book and one of the authors, Roy Chowdhury, had been criticised in an article that appeared in the Organiser magazine that usually echoes the views of the Sangh.

OUP India’s publicity manager Iti Khurana said: “We have come to an agreement with the authors recently that we will return the rights to publish this book in paperback in India, Pakistan, Bangladesh, Sri Lanka, Nepal, Bhutan, and Myanmar.”

Khurana did not respond to the question from this newspaper why OUP had decided against publishing the book in India after having drawn up a detailed plan in April for its release here in the first week of July, a week after the global edition’s launch.

There was no sign of the book till mid-September when the authors raised the alarm. Keane, co-author and Sydney University professor of political science, publicly questioned OUP about the delay on Twitter.

Since last weekend, the book has been on offer on Amazon and Flipkart but the authors maintain that this is the global edition which is being imported.

“Yesterday, after a suspiciously long delay, To Kill A Democracy appeared in India — stillborn,” Keane tweeted on Saturday. Earlier, while going public with the unexplained delay, he had wondered if OUP was intent on killing the book through censorship.

On Tuesday, the authors said in their joint statement: “When we enquired with OUP about the progress of the Indian edition, after waiting for nearly three months for it following the global launch, we learnt that OUP India has decided not to print the book in India. The original agreement was to have a locally printed, low-price edition so that it could be read widely. Instead, OUP India chose to import a very limited number of hardcover copies of the book for sale in India.

“That explains the long delays, the lack of publicity and the high price of Rs 995 instead of the originally agreed Rs 695. Since we do not believe that this is an appropriate mass-market price, we have taken back the rights for the paperback and translations. OUP has handed over the paperback rights to us and we hope to find an Indian publisher who will print and properly market our book here and make it widely available at an affordable price.”

Last week, a spokesperson for OUP India had said the “sales team felt the content is provocative” and had, therefore, sent the book — already reviewed favourably by OUP Oxford — for a second review. The spokesperson had denied that the article in the Organiser had anything to do with OUP India sending the book for a second review, maintaining that it was standard policy.

Till date, the authors have not been told why OUP decided against publishing the Indian edition. The delay in publication was initially attributed to the second wave of the pandemic in India and warehouse shifting. Neither were they given a satisfactory response on the need for a second review.

The article in the Organiser was largely critical of Roy Chowdhury — a Hong Kong-based journalist — for his articles in Time magazine about the Modi government’s handling of the second wave of the pandemic.

The article in the Organiser alleged that the book was written with a nefarious agenda although the OUP description of To Kill A Democracy states that “it rejects the belief that India was once a beacon of democracy but is now being ruined by the destructive forces of Modi-style populism. The book details the much deeper historical roots of the present-day assaults on civil liberties and democratic institutions.”