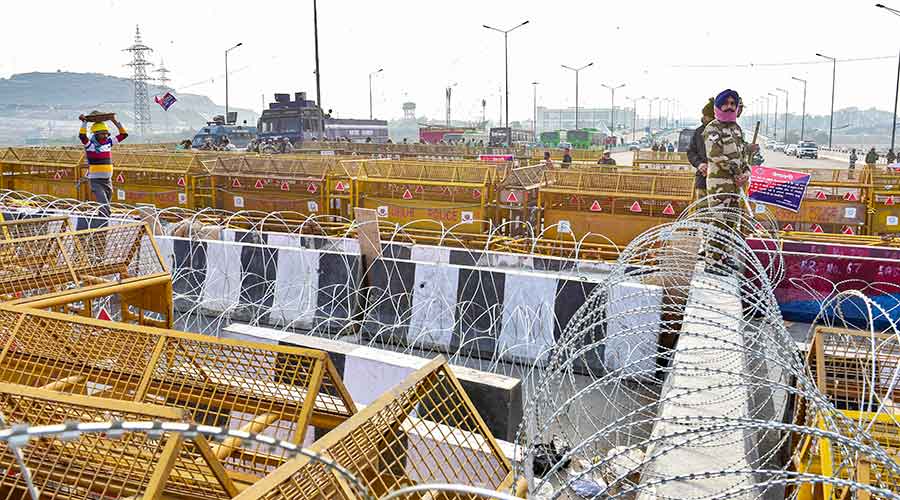 Fifteen Opposition MPs from 10 political parties were stopped from meeting the protesting farmers by police at the heavily barricaded Ghazipur agitation site on Thursday, getting a first-hand experience of the difficulties people including journalists are facing in accessing the area.

An initiative of Shiromani Akali Dal MP and former Union minister Harsimrat Kaur Badal, the visit was aimed at taking stock of the conditions at the protest sites. However, the team — which went in a bus — was stopped at the first barricade itself and the police refused to allow them any further.

Talking to reporters at Ghazipur, Harsimrat said even India’s border with Pakistan did not have such barricading.

“God forbid, if there is an emergency like a fire or a health issue, how will fire tenders or ambulances reach here? There is no water, no electricity,” she said.

Siva told The Telegraph that the team could see several layers of barricades and it was clear the roads had been blocked several kilometres from where the farmers were sitting, apparently to inconvenience the public and turn them against the movement. He and some other MPs had tried arguing with the police but to no avail.

Later, Harsimrat tweeted: “Saw first hand the conditions created at #ghazipurborder. Shocked to see the treatment being meted out to the annadaata (food-giver). Farmers are barricaded behind fortress-like concrete barriers & barbed wire fencing....”

Some MPs have managed to make it to the Ghazipur protest site in the past week, but in ones and twos.

As government-friendly television channels used the leaders’ visit on Thursday to project the farmers’ agitation as a “political” act, the Samyukta Kisan Morcha (SKM) — the banner under which the movement is being conducted country-wide — maintained that their protest has been apolitical from the beginning and will remain so.

“Leaders of political parties are not allowed to speak from any stage of the SKM. The support of political parties and leaders to this movement is welcome, but in no case the SKM’s stage will be allowed for political leaders,” the Morcha said in a statement in which it also demanded the immediate reinstatement of Internet services that have been disrupted by the government.

With Internet down and journalists not allowed to access the Singhu border, the SKM is now communicating with the world through statements. Earlier, it would conduct media conferences almost daily.

While demanding the restoration of Internet services, the SKM also picked up cudgels for the locals inconvenienced by the ban.

“Along with the agitating farmers, mediapersons and local people are facing a lot of troubles due to the Internet ban. Especially students are facing a big problem as their exams are coming soon. On one side the government propagates plans like Digital India, but on the other the people of the country are being deprived of Internet,” the Morcha said.