According to the signatories to the letter, the raids were the latest in a 'long line of coercion and intimidation' of Jaising and Grover 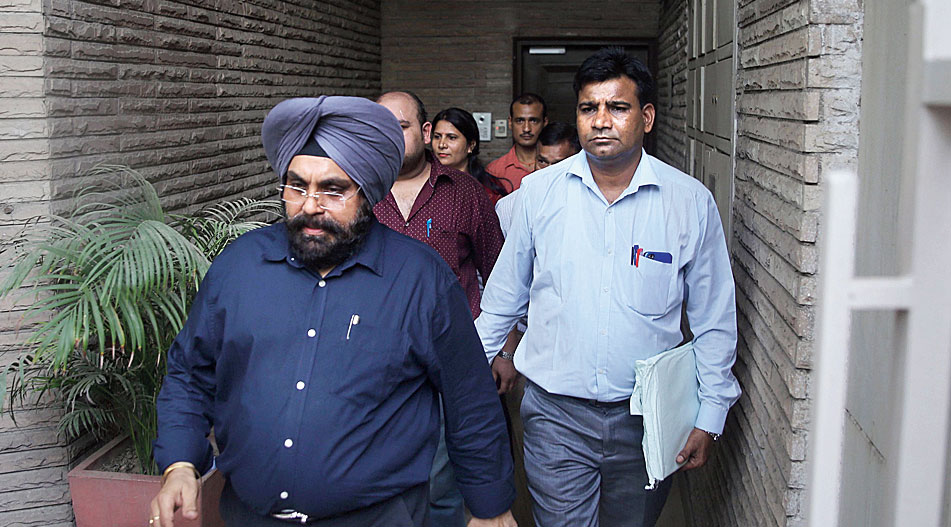 CBI officers leave the residence of Indira Jaising after conducting the raid in New Delhi on Thursday.
(PTI)
Our Special Correspondent   |   New Delhi   |   Published 12.07.19, 02:41 AM

Several Opposition parties in the Rajya Sabha on Thursday joined hands to pick up cudgels for the advocate couple Indira Jaising and Anand Grover after their home and offices were raided by the CBI in Delhi and Mumbai in an alleged case of FCRA violation by Lawyers Collective, an NGO they run.

The Rajya Sabha MPs sent a letter to Prime Minister Narendra Modi, describing the raids as a show of intimidation and abuse of power. This was particularly so since the two advocates had cooperated with the authorities ever since the charges were filed against their NGO, the letter said.

According to the signatories to the letter, the raids were the latest in a “long line of coercion and intimidation” of Jaising and Grover.

The parties that signed up on the letter calling for an end to the intimidation of Jaising and Grover include the Congress, Trinamul Congress, CPM, CPI, Bahujan Samaj Party, Samajwadi Party, Naga People’s Front, TRS and the RJD.

Set up in 1981, Lawyers Collective is a group of lawyers who have tried to use the law to change the status of marginalised communities through human rights advocacy, legal aid and litigation. Some of the issues they have taken up include domestic violence, sexual harassment at the workplace, matrimonial and family related matters, crimes against women particularly sexual assault and reproductive rights, rights of the LGBTQ community, access to medicine and health care.

Lawyers Collective represented the the Cancer Patients Aid Association in the landmark intellectual property case Novartis versus Union of India, opposing the pharma company’s patent of a life-saving cancer medication. The Novartis patent was rejected by Supreme Court as a result of which the generic versions of the drug are available at cheaper rates in India.