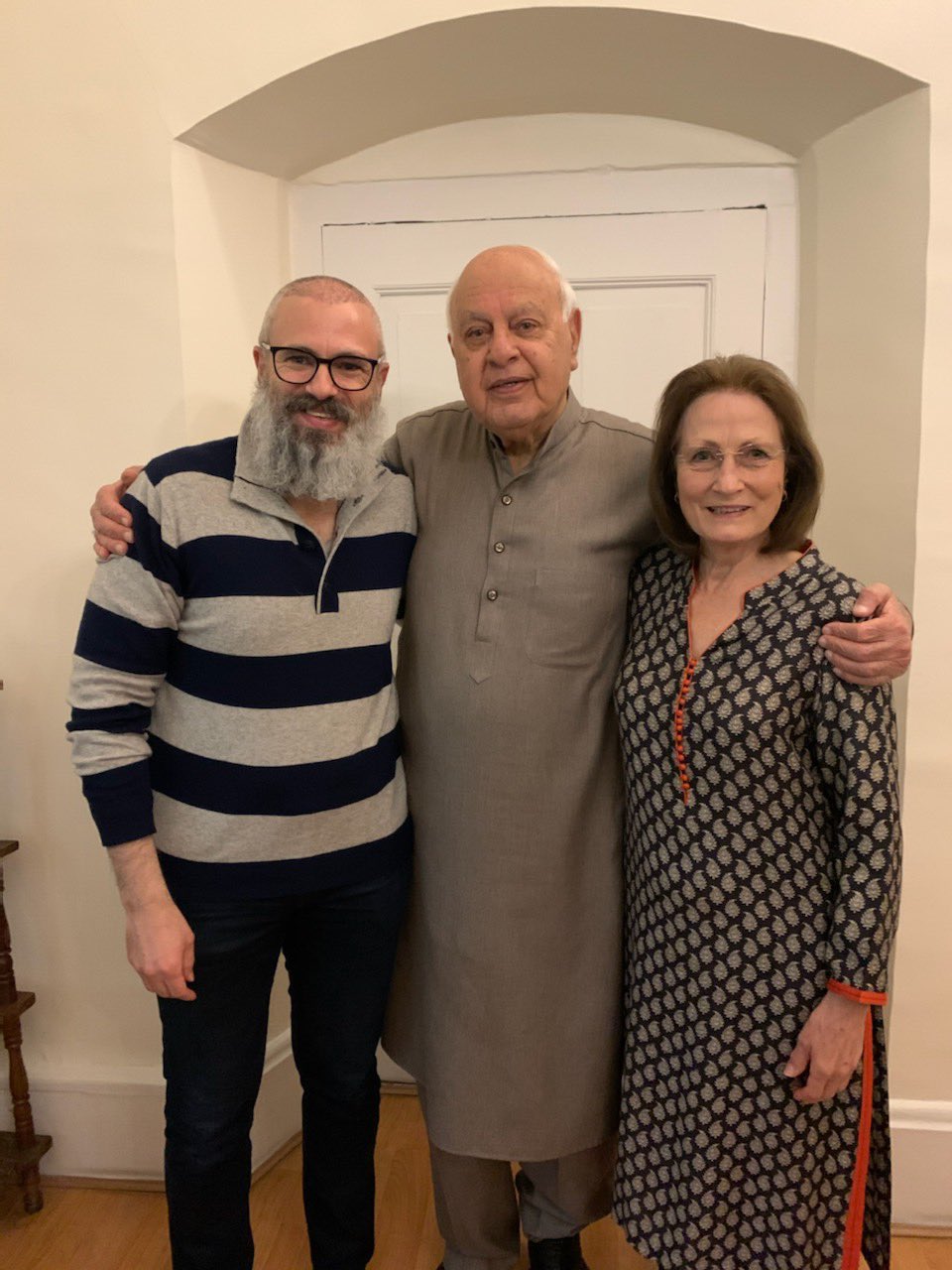 NC president Farooq Abdullah, centre, expressed happiness over the revocation of PSA detention of Omar, left, but said that total redemption of the situation was not possible until all political detainees were not released.
Twitter/@OmarAbdullah
Our Bureau And PTI   |   Srinagar   |   Published 24.03.20, 06:38 AM

Several political parties in Jammu and Kashmir on Tuesday hailed the release of National Conference vice-president Omar Abdullah from over seven months of detention after abrogation of special provisions under Article 370 and demanded the release of all detainees in the Union Territory.

Abdullah's release order was issued after charges under the Public Safety Act (PSA), slapped on him in February, were revoked.

Welcoming the release of its vice-president, Jammu and Kashmir National Conference also sought the release of all political detainees and others languishing in jails inside and outside J&K since the nullification of Article 370 and revocation of J&K special status.

NC president Farooq Abdullah expressed happiness over the revocation of Omar's PSA detention, but said total redemption of the situation was not possible until all political detainees were not released.

'I am glad to see him out from the detention, which has lasted for around eight months. Total redemption of the situation is not possible until all political detainees and others are not released at once. I express my gratitude to those people, politicians, parliamentarians, who have all along been seeking his release,' he said.

Several other party leaders, including Members of Parliament, also welcomed the release of the party's vice president.

The leaders also asked for the immediate release of party general-secretary Ali Mohammad Sagar who is also detained under the PSA.

Taking to Twitter soon after his release, Omar expressed gratitude to his sister Sara Pilot, Congress leader Kapil Sibal and advocates Gopal Sankaranarayanan and Shariq Reyaz for fighting against the 'unjust PSA detention'.

I owe a huge debt of gratitude to @KapilSibal, Gopal Sankaranarayanan, @reyazshariq and their legal teams for taking the fight against my unjust PSA detention to the SC. Thank you to my baby sister Sara for filing the petition to have me freed.

After Omar's release, the NC has also demanded the release of all political leaders who are under house detention including its Kashmir unit's provincial president Nasir Aslam Wani, besides leaders Chowdhary Ramzaan, Mohammad Shafi Uri, A. R. Rather, Shameema Firdous and others.

Iltija, whose mother is still under detention under the Public Safety Act, said for all its talk of women power and women emancipation, the Centre seems to fear the women the most referring to her mother's detention.

'Glad he will be released. For all their talk of nari Shakti & women emancipation, seems like this regime fears women the most (sic), Iltija wrote on Mehbooba's Twitter handle the government ordered his release.

Glad he will be released. For all their talk of nari Shakti & women emancipation, seems like this regime fears women the most https://t.co/J0GrXCCC5i

She has been tweeting from her mother's handle ever since the PDP president and former chief minister was detained in August last year.

'Omar's release is a step to correct one wrong among many wrongs. Though late, the decision to revoke the PSA imposed against Omar Abdullah is a welcome one. In the wake of spread of deadly coronavirus, the government should release all the detainees, who were detained after August 5, including PDP president and former CM Mehbooba Mufti, Jammu and Kashmir People's Movement chief, Shah Faesal,' the CPI(M) secretary said in a statement.

Sitaram Yechury, the general-secretary of CPI (M), also welcomed Omar's release, demanding that other detainees be released too.

'After eight long months of totally unjustifiable detention, we welcome the release of Omar Abdullah. Immediately, Mehbooba Mufti, Shah Faesal and thousands of others detained in and outside J&K must be freed. Given the nation-wide clampdown over COVID19, this is an imperative,' he said.

After eight long months of totally unjustifiable detention, we welcome the release of Omar Abdullah. Immediately, Mehbooba Mufti, Shah Faesal and thousands of others detained in and outside J&K must be freed. Given the nation-wide clampdown over COVID19, this is an imperative.

Jammu and Kashmir Peoples Conference too welcomed Omar's release, but demanded the release of its chairman Sajad Lone.

The recently-launched Jammu Kashmir Apni Party (JKAP) president Syed Mohammad Altaf Bukhari also welcomed the release of former chief minister and demanded that all other political detainees, including Mehbooba, be also released at the earliest in view of the Covid-19 outbreak.

In a statement issued in Srinagar, Bukhari termed the revocation of the PSA against Omar a significant move that will help in making the situation more conducive in Jammu and Kashmir.

He demanded the other former chief minister, Mehbooba Mufti, besides hundreds of political activists currently detained in and outside Jammu and Kashmir jails be freed especially in view of the coronavirus pandemic.

Abdullah, who turned 50 on March 10, had spent 232 days in custody since the government announced abrogation of the special status of the erstwhile state on August 5 last year.

The National Conference leader was initially detained under preventive custody and later slapped with the PSA on February 5.

On March 13, Omar's father and former chief minister of Jammu and Kashmir Farooq Abdullah was also released from detention after seven months. The NC president did not make any political statement upon his release. He, however, said that his freedom would not be complete till others, including Omar and PDP leader Mehbooba Mufti, were also released.

Later, he broke his silence, saying that the political landscape in the estwhile state was not conducive to make any statement.

“While I believe a free and frank exchange of political views is essential so that we can take stock of the momentous changes that J&K has seen after 5th August 2019, we are still some way away from an environment where such political discourse will be possible,” he said in a statement.