The scientists from the Indian Institute of Sciences (IISc), Bangalore, have left Odisha, official sources said 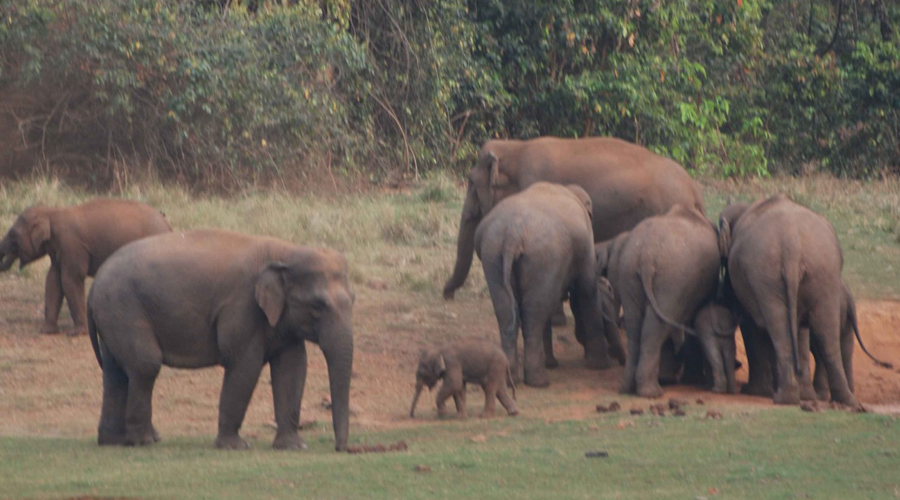 The incessant rain for the past few days has stalled O the Odisha government’s ambitious plan to attach radio collars on elephants to monitor the herds’ movement.

The scientists from the Indian Institute of Sciences (IISc), Bangalore, have left Odisha, official sources said.

“We had identified an elephant to tranquilise it for the purpose of putting a radio collar in Chandaka sanctuary. However, we did not take the risk at this moment as the atmosphere was not conducive for the purpose. We had made the survey of the herd of elephants but the ongoing rainfall has foiled our attempt,” Chandaka divisional forest officer (DFO) Md. Jameel told The Telegraph.

Honorary warden, Khurda wild life division Subhendu Mallick told this newspaper, “The forest officials had identified an elephant called Ramu and tried to tranquilise it by shooting eight darts. But the elephant overcame it and ventured into the deep forest. They failed to track the movement of the elephant. Now everything has come to a standstill.”

Odisha is witnessing heavy rainfall for the last 10 days following depression in the Bay of Bengal. Bhubaneswar also witnessed heavy rainfall on Sunday. Most of the areas are submerged and all the roads leading to Chandaka sanctuary have also become muddy.

“We will wait for a few more days. We need to have patience to go for tranquilising an elephant at this moment. There may be some adverse situations that have emerged because of the rain. We have to wait till the rains are over and the situation inside the forest improves,” said a senior forest official.

In a bid to bring down cases of human and animal conflict Odisha during the upcoming Rabi season, the Odisha government has also decided to install wooden beehive boxes in select forest divisions of the state to keep elephants away from human habitations.

“Engaging honey bees to ward off elephants has been successful in South Africa, Assam, Uttarakhand and Karnataka. We have planned to implement this in Odisha’s selective forest divisions on a pilot basis,” Principal Chief Conservator of Forests (PCCF) Shashi Paul told this newspaper.

The project has been named RE-Hab (Reducing Human-Elephant Attacks Using Bees). With this the government is hopeful that the human habitations as well as the crops will be safe from jumbo attacks. Cases of animal and human conflict are generally noticed in the months between October and March.

According to the plan, the beehive boxes will be put up at several places known for the movement of elephants. “When a jumbo tries to cross the border and comes in touch with the wire connected to the beehive box, the door of the box will open. Angered at being disturbed the army of honeybees will come out and attack the herd of elephants. Scared by the sudden attack, the elephants will run away and will not enter the human habitations and destroy the crops,” said Paul.

The state government will launch a pilot scheme in the Athmallik-Keonjhar forest division. It will procure the beehive boxes from the Khadi and Village Industries Commission.

As per the government report, at least 282 pachyderms have died due to human and animal conflict in the past three years. Similarly, 912 people have lost their lives in elephant attacks during the past 10 years.