The human rights activist has been in jail as an undertrial since September 13, 2020, in a terrorism conspiracy case relating to the February 2020 Delhi riots 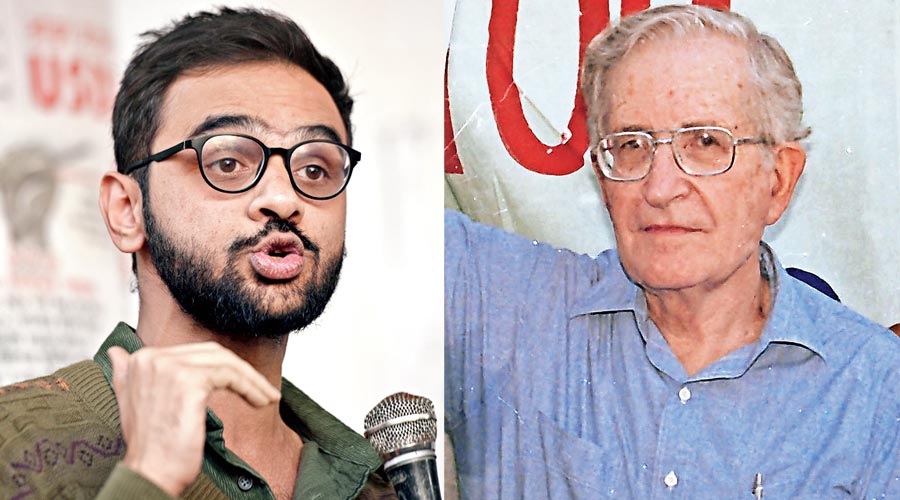 US-based academics Noam Chomsky and Rajmohan Gandhi have spoken out in support of human rights activist Umar Khalid, whose bail hearing in a Delhi riots conspiracy case is expected to resume from Monday.

Chomsky said the case was “one of many that shed a grim light on India’s system of justice during a period of repression” and curbs on freedom that were “part of the large-scale governmental effort to dismantle India’s honourable tradition of secular democracy and to impose a Hindu ethnocracy”.

“We are here today to support Umar Khalid, a student activist who spoke up against the discriminatory citizenship laws CAA/NRC,” the celebrated linguist and public intellectual said in his video message.

“He was charged with terrorism and instigation of riots. The only credible evidence that has been presented is that he was exercising his constitutional right to speak and to protest, a fundamental prerogative of citizenship in a free society.”

Umar has been in jail as an undertrial since September 13, 2020, in a terrorism conspiracy case relating to the February 2020 Delhi riots. He was denied bail by a sessions court in March after eight months of hearing. Delhi High Court, which resumes normal hearings after summer vacation on Monday, is hearing his appeal for bail.

A chargesheet of more than 17,000 pages was filed in two instalments in September and October, 2020, but the trial is yet to begin.

The police took another six months to give copies of the chargesheets to the accused, who had to move court to obtain these documents despite being legally entitled to receive them as soon as a court had admitted them.

“From this distance, I am in no position to evaluate the events and the charges in this particular case, of course,” Chomsky said.

“It is however one of many that shed a grim light on India’s system of justice during a period of repression and often violence that has been visibly undermining free institutions and the free practice of the rights of citizenship, part of the large-scale governmental effort to dismantle India’s honourable tradition of secular democracy and to impose a Hindu ethnocracy.

“Rightly, the secular democracy created in India in its recovery from brutal and destructive British rule has been praised as one of the great achievements of the modern age. The recent regression is therefore deeply saddening.”

Chomsky said: “We can all only hope that the courageous defence of freedom of justice on the part of many young activists will succeed in reversing this tragic course, and pave the way for India’s return to leadership in the search for a better world, one that honours peace and justice, drawing from India’s rich and impressive tradition.”

Gandhi, research professor at the University of Illinois at Urbana-Champaign and grandson of Mahatma Gandhi, said: “As a highly gifted young scholar, Umar produced a dissertation on the lives, struggles, and hopes of the Ho tribal community of Jharkhand. This contribution to scholarship, to the goal of human progress, revealed Umar Khalid’s potential.

“In Umar, India possesses one of its finest minds, reinforced by a sensitive conscience, and by a will committed to assisting the neediest.

“This Umar, this brilliant young son of India, has now been silenced for twenty continuous months. Held under the Unlawful Activities Prevention Act, Umar has not so far received, in all these twenty months, the fair and public trial to which every human being like him is entitled under the Universal Declaration of Human Rights of 1948, to which India is a signatory.

“Umar’s continuing silencing is a blotch on India’s image in the world, and a hurdle to India’s progress.

“All of us know that there is a global struggle today between supremacy and equality, which is also a struggle between autocracy and democracy, and between coercion and human dignity. India is at the centre of this struggle.

“Every additional day of detention for Umar and for the others wrongfully detained, who number in the thousands, is a fresh blow against democracy in the world, against human dignity, and against India’s good name.

“Let Umar breathe the air of freedom. Let him have the right to contribute to India’s true mission, which is to expand dignity, liberty, equality, and harmony — within her borders, and in the world.”

Umar is accused of delivering a speech in Maharashtra asking people to protest against the new citizenship regime during then US President Donald Trump’s India visit. Umar was charged under the anti-terror law UAPA for allegedly inciting the Delhi riots, which began days after his speech.

His defence has been that the police have relied on truncated videos of his February 17 speech in Amravati, and that the chargesheet is a fabrication. The prosecution accuses Umar of meticulously selecting the sites of the protests, which it alleges were directed at inciting the riots that claimed 53 lives.

The statements of Chomsky and Gandhi were circulated by US-based NGO Hindus for Human Rights.