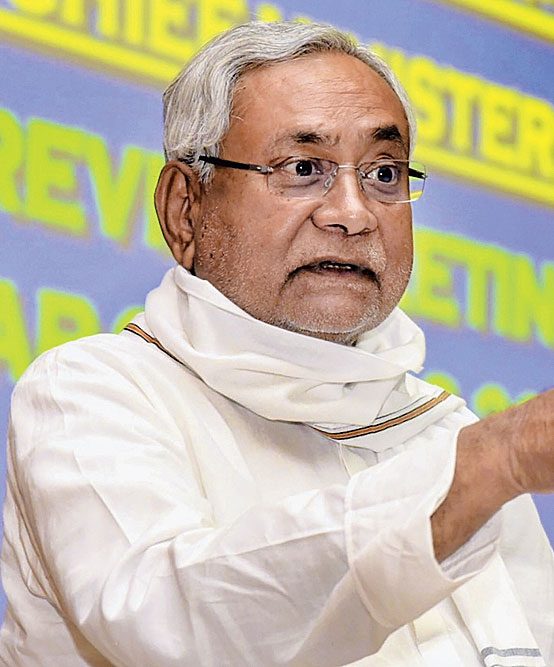 Bihar chief minister Nitish Kumar has directed officials to complete flood protection work at the earliest along the border in coordination with Nepal authorities.

Nitish’s directions came at a time when the neighbouring country has stopped embankment repair and strengthening work on the Lalbakeya river that flows along the border close to Bihar’s East Champaran district, which was reported in this paper.

The monsoon arrived in Bihar on time this year and it is bracing for the annual floods, which are caused due to heavy rainfall in the catchment areas of several big and small rivers that flow into the state from Nepal.

Nepal has also obstructed maintenance work of the Valmikinagar barrage on the Gandak river along the border close to West Champaran district. The Bihar government has built the barrage and engineers from water resources department control the release of water from the sluice gates during the flood season to limit the damage.

A similar situation has emerged in the upstream areas of the Kamla river close to the border along Madhubani district, where Nepal has stopped Bihar officials from carrying out flood protection and repair work of the embankments.

Sources said the chief minister discussed the issue in detail at the meeting, but expressed helplessness as it was a matter between two countries in which Bihar, despite being the biggest stakeholder, cannot play any significant role other than appealing to the Nepal authorities.

State water resources minister Sanjay Jha told reporters: “Nepal is not allowing us to complete the flood protection and maintenance work on the Valmikinagar barrage and the embankment on the Lalbakeya river. We carry out the repair work every year before monsoon, but this year they have prevented us from doing so.”

He also wrote to external affairs minister S. Jaishankar and Jal Shakti minister Gajendra Singh Shekhawat on Monday, requesting them to intervene in the matter and discuss the issue with their Nepal counterparts.

“Repair and maintenance work on the Valmikinagar barrage is crucial. Of its 36 sluice gates, 18 are on our side and the rest are in Nepal. The department has been carrying out repair and maintenance on both sides of the barrage for decades. There had never been any issue, but this time Nepal has put up barriers to prevent our officials from venturing to their side,” Jha said.

Sources said the situation could lead to not only devastating floods in north Bihar this year but also threaten the Valmikinagar barrage and embankments on other rivers.

Nepal’s refusal to allow flood protection work coincides with firing by its border guards that killed a villager in Bihar on June 13. The Nepalese authorities had cited lockdown violation. Around the same time, Nepal’s parliament voted on a new map that includes Kalapani, Lipu Lekh and Limpiyadhura, territories near the western border that India also claims.