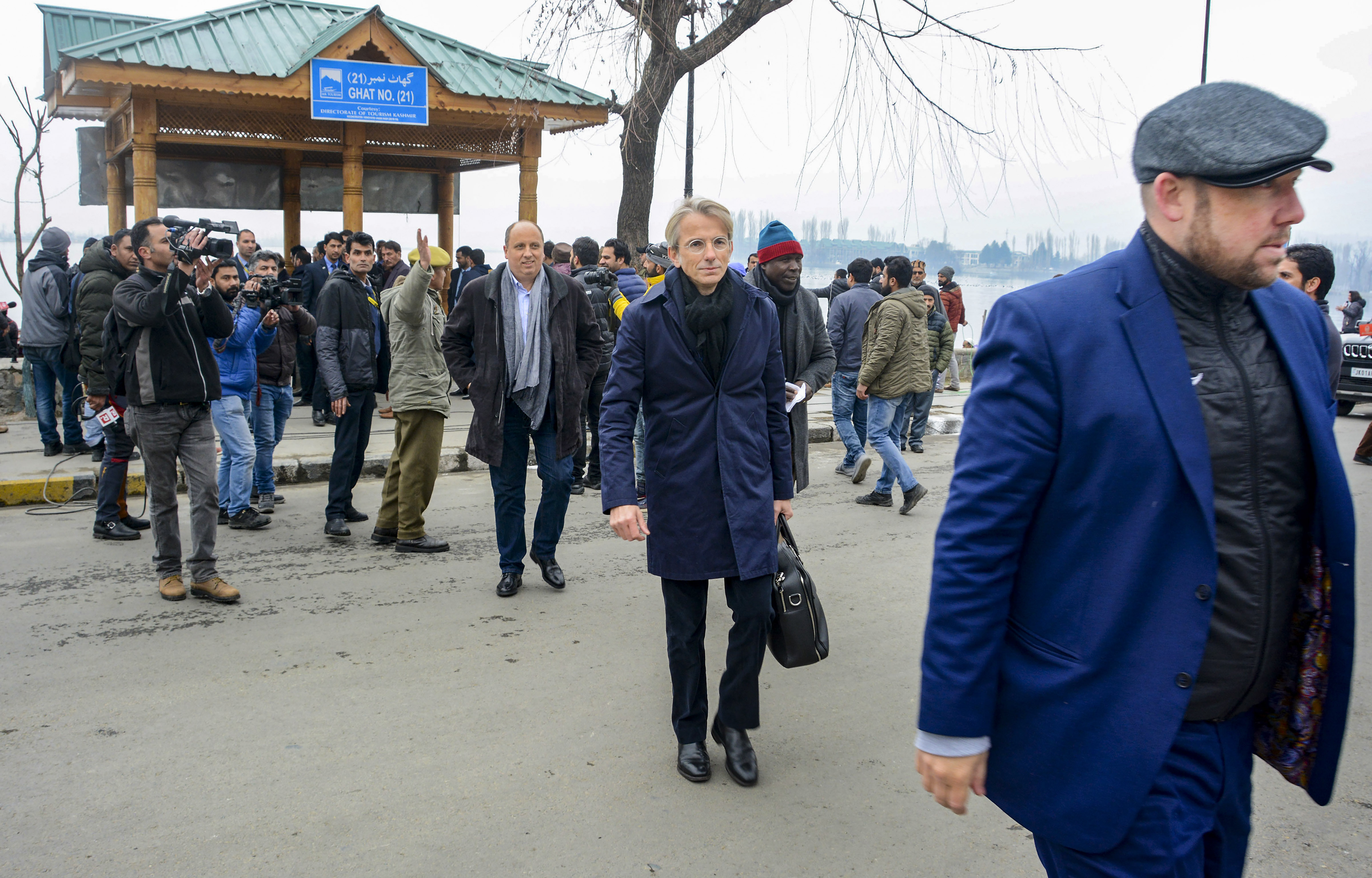 A second batch of 25 foreign envoys arrived in Srinagar on Wednesday as part of a Union government-facilitated trip to help them have a first-hand assessment of the situation in Jammu and Kashmir, a region which has faced months of harsh restrictions after its special status was stripped of in August.

The envoys arrived at the Srinagar airport around 11am but could not go ahead with their scheduled visit to Baramulla in north Kashmir due to inclement weather, officials said.

The foreign dignitaries instead went for a Shikara (boat) ride in the famous Dal Lake.

The government had taken a group of 15 envoys to Jammu and Kashmir last month with an aim to make them see the efforts to bring back normalcy in Kashmir Valley. A number of Opposition parties called it a 'guided tour'.

In New Delhi, the ministry of external affairs (MEA) said that the group would meet representatives of the civil society, including youths, political leaders, local businessmen during their visit to the Union territory.

After announcing reorganisation of Jammu and Kashmir and withdrawal of its special powers, India imposed severe curbs including on movement of people as well as on mobile telephone and internet connectivity. The crackdown drew international criticism with several countries expressing concerns over the situation in Kashmir.

'As a part of the outreach efforts, visit of a second group of foreign heads of mission is being organised to the Union Territory of Jammu and Kashmir on February 12-13,' the MEA said.

It said the group is visiting Baramulla, Srinagar and Jammu and would meet representatives of the civil society, including youth from different ethnic, religious and socio-economic communities, local businessmen and political leaders.

'They will also be briefed about the development programmes being implemented, get assessment of the security situation, and witness for themselves the progressive normalisation of the situation,' the MEA said.

Reacting to the visit of the envoys, Iltija Mufti, daughter of incarcerated PDP president Mehbooba Mufti, said she hoped that the group will question the authorities about the ban on Internet and detention of political leaders under the Public Safety Act.

In a tweet, she hoped that the envoys will question the central government about 'ban' on internet connectivity since August 5 when the announcement on reorganisation of Jammu and Kashmir was made.

She also accused the government of muzzling local media in Kashmir, and mentioned about slapping of draconian PSA on her mother, Omar Abdullah and Farooq Abdullah.

Iltija said huge deployment of security personnel has created fear among people and that normalcy in Kashmir has been an illusion.

A visiting envoy told reporters that he was in Kashmir 'as a tourist'.

'Upon our arrival, we enjoyed a #Shikara ride on Dal Lake in Srinagar, Kashmir. Beautiful lake and hospitable people. I bought a beautiful Kashmiri ring from a boat serving as a shop. @MEAIndia,' Afghanistan's envoy to India Tahir Qadiry tweeted.

He also praised the Kashmiris for their hospitality.

'We Afghans claim that we are Mehman-Navaz (Hospitable), but the Kashmiris are definitely so too. Interacted with a bunch of young people here. This girl is a gold-medalist in basketball with very high hopes. Wishing this beautiful valley & its people lots of good wishes!' he said in another tweet.

On their meeting with journalists, Qadiry said, 'In our interaction with the Kashmiri media outlets, the media people seriously urged the govt to restore the internet broadband as it is causing them so much problems to report and broadcast.'