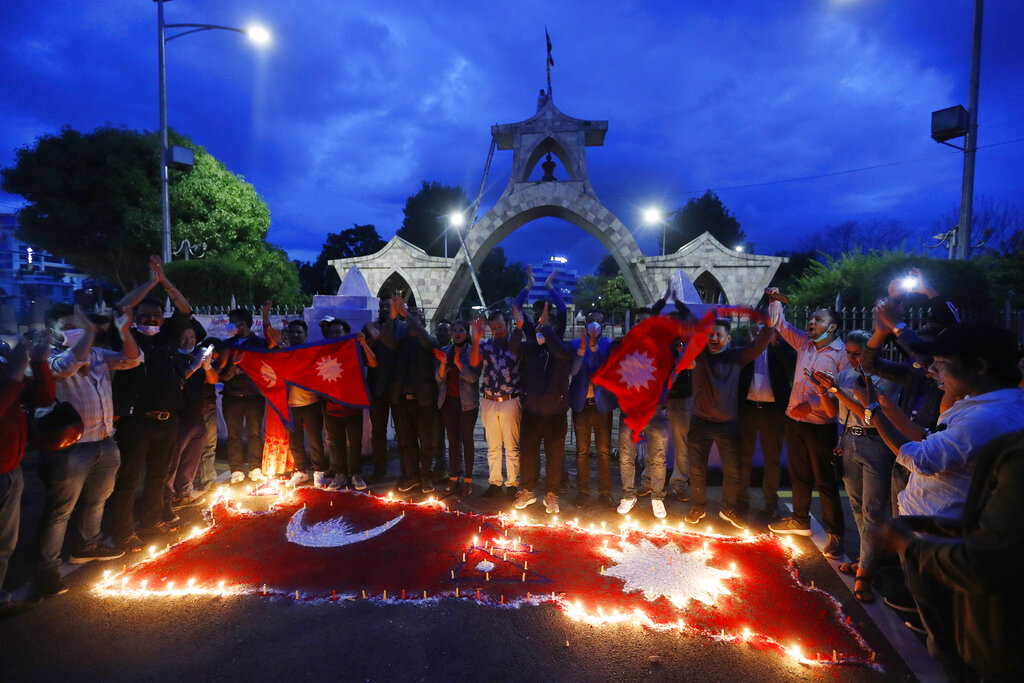 People light candles on an outline of the new map of Nepal drawn on a road as they celebrate the approval of the political map to include territory claimed by both the country and India in Kathmandu on June 13
(AP)
Dev Raj   |   Patna   |   Published 21.06.20, 03:36 AM

Nepal has stopped Bihar from strengthening a stretch of a decades-old river embankment claiming it lies on no-man’s-land, at a time Kathmandu has also rekindled a territorial dispute near the western part of its Indian border.

Nepal’s forced stoppage of the embankment project on the Lalbakeya river also coincides with firing by Nepal’s border guards that killed a Bihar villager a week ago, although both governments have played the incident down.

Officials and border police from Nepal halted the project in Dhaka block of East Champaran district “around June 4”, sources in Bihar’s water resources department said, although the matter came to light only on Saturday.

Uma Nath Ram, superintending engineer for the department’s flood control and drainage circle, Motihari, said the Lalbakeya caused floods almost every monsoon season, and the mud embankment was repaired or strengthened every year.

“We were to strengthen it and raise its height along a stretch of 4.1km and had completed the job along 3.6km,” Ram told The Telegraph.

“But officials and security personnel from Nepal forbade us against proceeding any further. They said the project was being carried out on no-man’s-land.”

Ram said Nepal officials began objecting only after the job had been completed along a 3.1km stretch. Still, he and his team somehow managed to complete another 500 metres before the Nepalese came over and stopped the project.

Sources said the Bihar government had written to the consulate-general of India at Birgunj in Nepal to resolve the issue.

It has also written to the Survey of India to investigate Nepal’s claim that the embankment intrudes into no-man’s-land.

Ram said the embankment is supposed to have been built by the erstwhile zamindars but the government has no documents to ascertain the date.

Sources said Nepal had objected for the first time during last year’s floods when efforts were made to repair a 5-metre breach in the embankment at Balua Guabari village, near border pillar numbers 346 and 347.

The Rauthat district administration across the border had then too claimed the stretch of embankment was on no-man’s-land and forced the repair project to stop.

Balua Guabari is part of the last 500-metre stretch that was to be strengthened this year but could not be.

“A strong embankment is necessary on our side to prevent floods when the Lalbakeya is in spate. We were raising the embankment’s height to around 12 feet,” Ram said.

Water resource department officials said the embankment was being bolstered with the help of geobags and sandbags so it could withstand erosion by rain and floodwaters.

The Lalbakeya originates in Nepal, flows along the India-Nepal border and then flows into the Bagmati river in Bihar’s Sitamarhi district. Heavy rain in Nepal causes devastating floods in East Champaran district and adjoining areas every year.

The Sashastra Seema Bal has tightened its border vigil in the light of the new development.

On June 13, Nepal’s frontier police had heated up the settled Bihar border by firing on Indian villagers during a cross-border family meeting, killing one and injuring two. The Nepalese had cited lockdown violations.

Around the same time, Nepal’s parliament voted on a new map that includes Kalapani, Lipu Lekh and Limpiyadhura — territories near the western border that India too claims.