Advertisement
Home / India / Modi has a go at Congress and TRS, all guns blazing

Modi has a go at Congress and TRS, all guns blazing 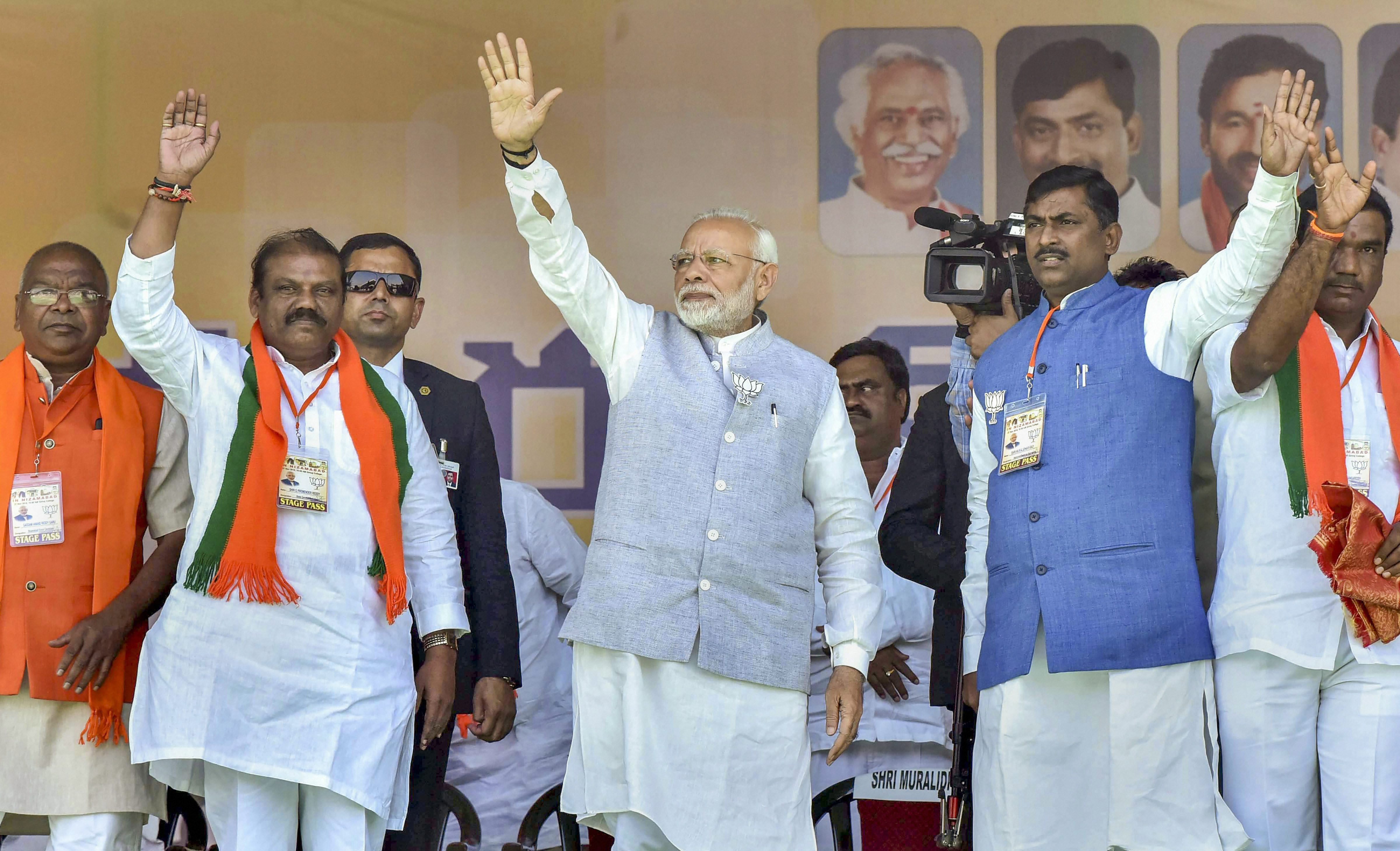 Prime Minister Narendra Modi on Monday accused the TRS and Congress of perpetuating family rule and said the two parties were playing a 'friendly match' in Telangana elections.

'The chief minister of Telangana and his family thinks they can get away with doing no work like the Congress.... They have adopted the style of the Congress, which ruled for 50-52 years without doing anything. But that cannot happen now,' he told an election rally in Nizamabad, as he took the poll battle to caretaker chief minister K. Chandrasekhar Rao's turf.

Nizamabad is represented by Rao's daughter K. Kavitha in the Lok Sabha.


Congress and TRS are two faces of the same coin. Both parties are competing against each other on who tells more lies.
- Narendra Modi


Recalling that Rao had served as a minister in the UPA government, Modi said the TRS chief did his 'apprenticeship' under the Congress.

'Congress and TRS are two faces of the same coin. Both parties are competing against each other on who tells more lies,' he said.

'TRS and Congress are family-ruled parties playing a friendly match in Telangana polls,' he said, adding it was a 'big joke' that UPA chairperson Sonia Gandhi and Congress president Rahul Gandhi assailed the TRS for being a 'family party' at an election rally last week.

The Prime Minister said Rao's decision to go for early elections could give people an opportunity to 'get rid of him before time'.

He said Rao did not join Ayushman Bharat scheme under which the Centre would bear medical expenses of the poor to the extent of Rs five lakh a year because of his feeling of insecurity.

'This chief minister feels so insecure...he trusts astrologers, does puja, ties nimbu-mirchi (to ward off evil). So, when we introduced Ayushman Bharat Yojana, he decided not to join it. He feared people will reject him if Modicare comes into force. He did injustice to the poor people of the state,' Modi said.

Amid reports that the Congress was preparing a manifesto that would envisage separate schools and hospitals for Muslims, Modi said the only mantra that the BJP followed was 'Sabka Saath, Sabka Vikas' and was against vote bank politics.

Development, he said, was a casualty wherever vote bank politics and politics of casteism, communalism and nepotism have flourished.

He said those who believe in development, building new India and new Telangana trust the BJP the most.

Accusing the TRS government of not keeping its promises made to the youth, farmers, Dalits, tribals and backward classes, Modi asked the voters to teach the party a lesson.

Modi said the chief minister had once asserted he would transform Nizamabad into a smart city like London but the place was still grappling with shortage of water, electricity and proper roads.

'The CM once said he would reach water of the Godavari river to each household or else will not seek votes. Has it happened? The man who cannot provide people with even water doesn't deserve to be given power,' he said.