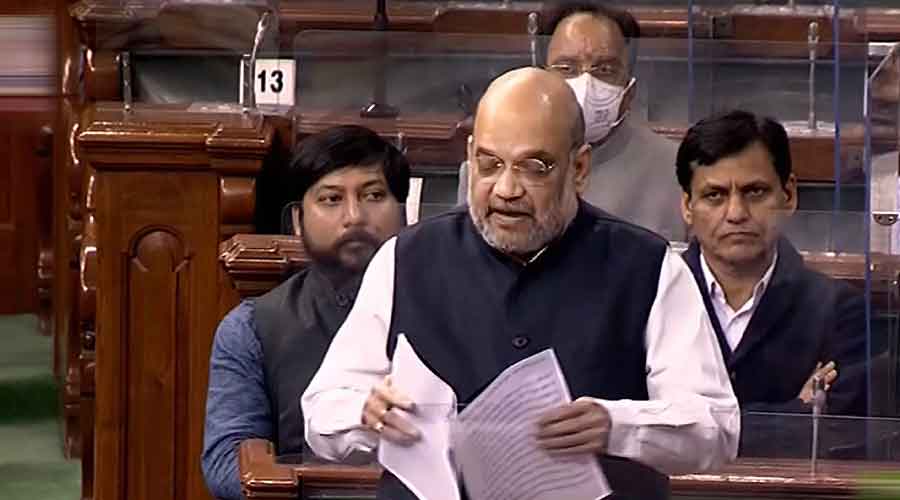 Home minister Amit Shah on Monday expressed regret in Parliament over the botched counter-insurgency operation by the army in Nagaland that killed 14 civilians, amid protests in the Rajya Sabha and an Opposition walkout in the Lok Sabha that Trinamul members did not join.

Shah made a statement in the Lok Sabha and then in the Rajya Sabha, blaming the killings on “mistaken identity” and announcing a probe by a special investigating team.

He, however, was silent on the Opposition demands for compensation for the victims’ families and repeal or amendment of the Armed Forces (Special Powers) Act. Denied the opportunity to seek clarifications from Shah, the Congress, DMK and the Left walked out of the Lok Sabha.

Trinamul members did not walk out but stood on their seats and requested that Shah say something about compensation for the victims’ families. They sat down after their plea was disallowed. (Later, Nagaland chief minister Neiphiu Rio said in Mon district that Shah had announced an ex gratia of Rs 11 lakh and a government job for the family of each of the dead".

Bahujan Samaj Party members didn’t walk out, either. Rashtriya Janata Dal and Samajwadi Party members could not be spotted in the Lower House.

The Opposition members demanded revocation of the suspension of 12 MPs and chanted slogans against the government. The House was adjourned amid the din without the members getting an opportunity to seek clarifications from Shah, a privilege Rajya Sabha rules allow.

Earlier, members across Opposition parties had raised the issue, slammed the government over the killing of innocent civilians and sought compensation for the families, action against the guilty, and a discussion on the subject.

Asaduddin Owaisi of the AIMIM demanded repeal of the controversial AFSPA, which gives the security forces extraordinary powers in disturbed areas, terming it “an object of hate”.

The Lok Sabha calmly heard out Shah, the walkouts taking place only after members were denied the chance to ask questions. Unlike the Rajya Sabha’s, the Lower House’s rules don’t allow the seeking of clarifications after a minister’s statement.

“Government of India expresses regrets over the incident and condolences to those killed.... An SIT has been formed and has been directed to complete the investigation in a month,” Shah told the Lok Sabha.

He said the situation was still tense but under control. “All agencies have to ensure such incidents do not happen in future,” he said.

Shah gave details of the incident, suggesting a civilian death toll of 13. He said the 21 Commandos had laid an ambush on the basis of information about insurgent movements. He added that a vehicle arrived at the spot and on being signalled to stop, tried to flee. The troops fired on it, killing six people. “It was a case of mistaken identity,” he said.

After this, Shah said, local villagers attacked the soldiers and the retaliatory fire killed seven more people. A soldier too died.

Tokeheho Yepthomi, Nationalist Democratic Progressive Party MP from Nagaland, had been the first to speak on the issue during Zero Hour in the Lok Sabha. He demanded an inquiry and compensation for the victims’ families.

Congress member Gaurav Gogoi asked how “a group of unarmed civilians, unarmed labourers could not be distinguished from hardcore militants” and demanded an all-party meeting over the unrest in the Northeast.

Another Congress member from Assam, Pradyut Bordoloi, demanded an amendment to the AFSPA along with “oversight” and “checks and balances”.

TMC visit off
A Trinamul delegation called off at the Calcutta airport a trip to Nagaland as prohibitory orders were imposed in Mon district where the killings took place. The restrictions made it impossible for the delegation to reach the bereaved families by car.

“The Nagaland incident proves how things go wrong if you interfere with the jurisdiction of states,” said Dev.

“The Union home minister has completely failed to provide security to the nation’s citizens…. He should immediately convene a meeting of the chief ministers of all Northeast states to discuss the key issue of the AFSPA,” she added.