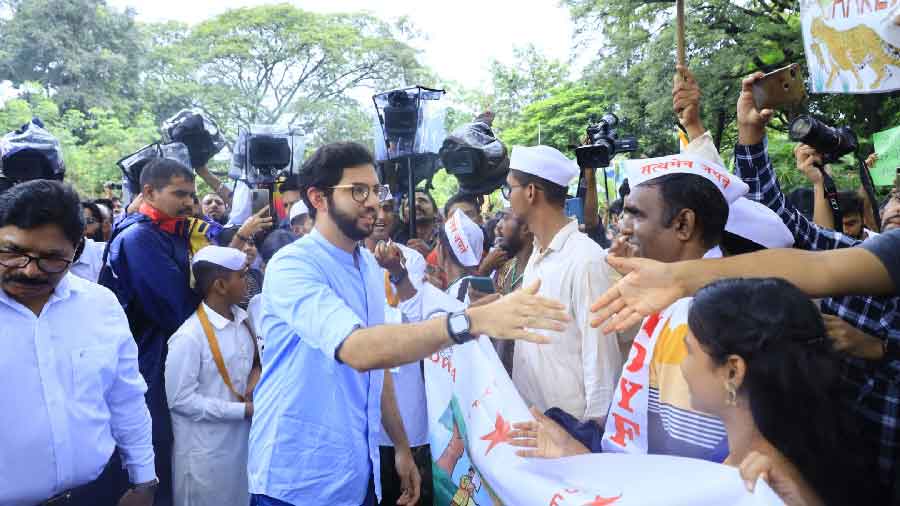 Former Maharashtra minister Aaditya Thackeray on Sunday participated in a protest against the state government's decision to construct a Metro car shed in Mumbai's Aarey Colony, and said the 808-acre area there was reserved as a forest to preserve the wildlife and biodiversity in the city.

"I appeal to the new state government (led by CM Eknath Shinde) not to take out the anger against us on Mumbai," Thackeray told reporters.

Thackeray said the previous Maha Vikas Aghadi (MVA) government, wherein he had served as the tourism and environment minister, was "pro-Mumbai, pro-Maharashtra and a votary of sustainable development".

In the Aarey forest, often termed as the city's green lung', located in Goregaon western suburb, some 300 different varieties of flora and fauna are found, including a large number of leopards.

Green activists have been vehemently opposing the cutting of trees in Aarey for the car shed.

Maharashtra Deputy Chief Minister Devendra Fadnavis recently directed state Advocate General and the administration to submit a proposal on building the car shed in Aarey Colony, instead of Kanjurmarg, the eastern suburb which was chosen by the previous Uddhav Thackeray-led MVA government.

On Sunday, Aaditya Thackeray participated in a protest by environmentalists against the Metro car shed in Aarey.

On the previous government's decision to shift the project to Kanjurmarg, the Shiv Sena leader said, "We wanted to preserve the wildlife and biodiversity. We recognised the adivasi (tribal) hamlets and at the same time, worked on the concretisation of roads in Aarey without touching a single tree."

He said before the MVA government was toppled (recently after Sena MLA Eknath Shinde and most of the party legislators rebelled), it was looking for options other than Kanjurmarg.

A car shed is not for daily use, but for maintenance every four to five months, he said.

and Nariman Point (in south Mumbai), he added.