'Happy that our socialist ideology is expanding' 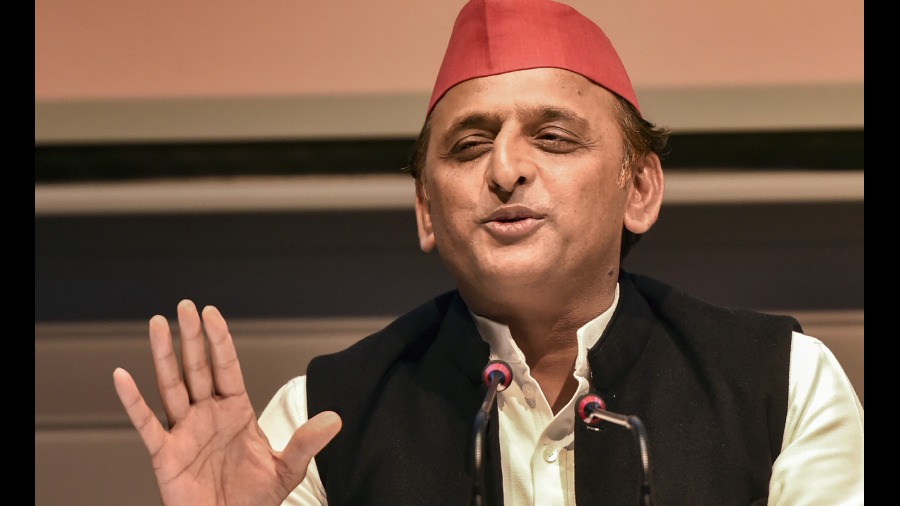 Samajwadi Party patriarch Mulayam Singh Yadav tried hard to convince his daughter-in-law Aparna Yadav to not join the BJP, party chief Akhilesh Yadav said on Wednesday and expressed his happiness that the SP's socialist ideology is expanding its reach.

Akhilesh Yadav, who sent his sister-in-law best wishes for her move to the BJP, also addressed speculation on whether he would contest the assembly elections and said he would consult the people of his parliamentary constituency Azamgarh.

If I contest the assembly election, it will be after taking permission from the people of Azamgarh who have elected me as MP," he told reporters when asked if he would enter into the electoral fray for the coming elections.

In his first response to Aparna Yadav joining the BJP, Akhilesh Yadav said he would like to congratulate her and extend her his best wishes.

"I am also happy that our socialist ideology is expanding. I hope that our ideology will reach there and work to save the constitution and democracy," the SP president said.

"Netaji (Mulayam Singh Yadav) tried very hard to convince her," he said when asked if efforts were made to stop Aparna Yadav from joining the ruling party.

Aparna Yadav is married to Prateek Yadav, the son of Mulayam Singh Yadav's second wife, while Akhilesh Yadav is his son from the first marriage.

She joined the BJP in the presence of Uttar Pradesh Deputy Chief Minister Keshav Prasad Maurya and its state chief Swatantra Dev Singh. Expressing her admiration for Prime Minister Narendra Modi, she said the nation's interest has always been a priority for her and praised several schemes of the BJP government for cleanliness, woman empowerment and employment.

There had been much speculation about her joining the BJP, and the development highlights the rift in the SP's ruling family at a time Akhilesh Yadav has been working to rally the party's base in the run up to the state assembly polls beginning next month.

Maurya was also quick to attack Akhilesh Yadav, saying he has not been successful in his family and was also "unsuccessful" as chief minister and MP.

Expressing her admiration for Modi, Aparna also said the nation's interest has always been a priority for her and praised several schemes of the BJP government for cleanliness, woman empowerment and employment.

Aparna Yadav is married to Prateek Yadav, son of Mulayam Singh Yadav's second wife while SP president Akhilesh Yadav is his son from the first marriage.

There had been much speculation about her joining the BJP, and the development highlights the rift in the SP's ruling family at a time when Akhilesh Yadav has been working to rally the party's base in the run up to the state assembly polls.

With Akhilesh Yadav yet to make it clear if he will fight the polls, Maurya took a jibe at him, saying the SP leader always stakes claim over development works carried out by the BJP government but is unable to have courage to fight from any place which he has "developed".

Yadav has often claimed that several signature development projects of the BJP government in the state were either sanctioned or even undertaken by his dispensation when it was in power during 2012-17, a claim mocked by the ruling party.

Praising Aparna Yadav, Maurya said she had been from time to time expressing views that showed her inclination towards the BJP.

The Uttar Pradesh BJP president used the occasion to hit out at the Samajwadi Party for its alleged support to criminals in its ticket distribution in western Uttar Pradesh, the region which goes to the polls on February 10 and 14. Farmers and women never felts safe when the SP was in power, he said.

Aparna Yadav believes that good governance of PM Modi and Chief Minister Yogi Adityanath should continue, and her induction in the BJP will boost the party, Singh said.

The BJP may field her in the polls, sources said.

Aparna Yadav had contested the 2017 assembly polls on the Samajwadi Party ticket from Lucknow Cantt but had lost to BJP's Rita Bahuguna Joshi, now a Lok Sabha member.

Assembly polls in Uttar Pradesh will be held in seven phases beginning from February 10.

Akhilesh to contest UP polls

Akhilesh Yadav, after much dilly-dallying, has decided to contest the Uttar Pradesh election, sources said today, NDTV.con said in a report. He had earlier said he would not contest the polls and would prefer to focus on every seat in the state.

Akhilesh Yadav is the Lok Sabha MP from Azamgarh in eastern Uttar Pradesh and has never contested a state election. His seat has not been decided yet, sources say.

Sources said the pressure was on the Samajwadi Party chief and former Chief Minister after the BJP's Yogi Adityanath, the incumbent Chief Minister of Uttar Pradesh, decided to contest the state polls for the first time.

Yogi Adityanath will contest from Gorakhpur Sadar in eastern UP and the BJP assesses big gains in this region by fielding the priest-politician, who is the head of the influential Gorakhpur Mutt.

According to sources, Akhilesh Yadav may pick a seat either from eastern UP or a central constituency like the high-profile Lucknow. Contesting from more than one seat is also on the table.

Reports of Akhilesh Yadav contesting the election come a day his sister-in-law Aparna Yadav is tipped to join the BJP in Delhi, going in the opposite direction after several key backward caste leaders from the BJP switched to the Samajwadi Party recently.