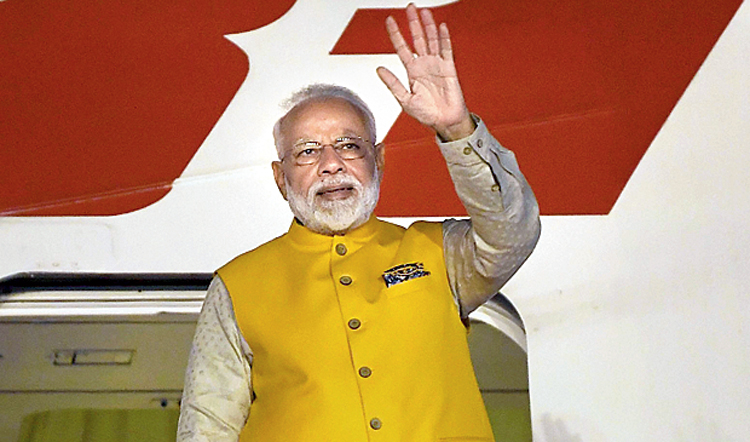 Prime Minister Narendra Modi on Wednesday chastised the Opposition for questioning Electronic Voting Machines, forgetting that the earliest salvo against EVMs was fired by the BJP itself in 2009.

Replying to the debate in the Rajya Sabha on the motion of thanks to the President’s address, Modi accused Leader of the Opposition Ghulam Nabi Azad of insulting the people of India by describing the mandate he secured as a loss for India and democracy.

“There is a limit to arrogance. Criticise the BJP but do not insult the people,” the Prime Minister said.

For the most part sticking to his stump speech mode, Modi mocked the Opposition for questioning EVMs just because the results did not go their way. Taking jibes at the Congress, he said instead of introspecting and pinning responsibility, EVMs are being blamed.

Proceeding to put up a strong case in favour of EVMs, Modi reminded the Congress that much of the work on the machines was done under its watch in the past.

“You want to take credit for a lot that has happened in the country, but now that you have lost the elections you are blaming the EVMS that you introduced. This, after 113 Assembly elections and four Lok Sabha polls have been held till date on EVMs.’’

The courts, too, have spoken in favour of EVMs, Modi said, adding that the Opposition narrative had become so strong that even some in his own party had begun believing it till they were disabused of that notion.

He castigated the Opposition for creating doubts about the Voter Verified Paper Audit Trail (VVPAT) machines by going to court. The Opposition had gone to court not to petition against the VVPATs but with the plea to ensure that 50 per cent of the EVMs are matched with the VVPATs instead of just one per Assembly segment as was originally ordered. This was subsequently increased to five per Assembly segment.

While on the subject, the Prime Minister spoke about “one nation, one election” as an electoral reform and urged the Opposition to keep an open mind and discuss the issue to cut down the cost incurred in conducting frequent elections.

Reacting to the PM’s response to the demand for electoral reforms, Trinamul leader Derek O’Brien told reporters later that Modi was stuck on his own idea of electoral reforms and did not address the suggestions put forth by the Opposition.

The Prime Minister had a largely uninterrupted run in the Rajya Sabha for 70 minutes except when he said that the government had to literally beg the Opposition to allow him to reply to the debate at 2pm on Wednesday as he had to leave for Japan later in the night.

The Opposition protested against this bid by the Prime Minister to project them as an obstructive force.

In separate briefings after the debate, the Congress and Trinamul said what Modi claimed was far from true. Anand Sharma of the Congress and O’Brien said the Opposition had immediately agreed to slotting the Prime Minister’s reply for 2pm when it was mooted by the chairman at the leaders’ meeting.