Modi govt slashes excise duties on petrol by Rs 5, and diesel by Rs 10

The cut was announced a day after the declaration of by-election results in 29 Assembly seats and 3 Lok Sabha seats, wherein BJP suffered setback in some states 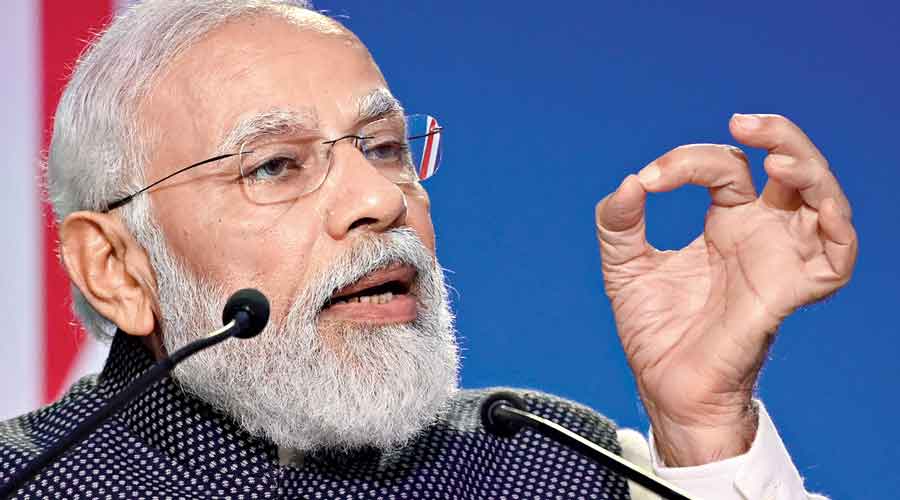 Prime Minister Modi at the climate meeting in Glasgow on Tuesday. Union minister Rajeev Chandrasekhar on Wednesday night described the fuel price relief as “a Diwali gift” from Modi to the people after returning from a “very successful visit” to the G20 and climate summits.
AP/PTI
R. Suryamurthy, Our Delhi Bureau   |   Published 04.11.21, 02:28 AM

The Narendra Modi government has finally buckled under pressure from consumers, voters and the Opposition and slashed excise duties on petrol by Rs 5 a litre and on diesel by Rs 10 a litre.

The cut was announced a day after the declaration of by-election results in 29 Assembly seats and three Lok Sabha seats, and ahead of the Assembly polls in Uttar Pradesh and several other states early next year. The price spike was cited as one of the reasons for the setback the BJP suffered in some states in the by-elections.

BJP leaders competed with one another to project the relief as a “Diwali gift” from Modi. Unsurprisingly, no credit was given to the Congress, which has been running a relentless campaign against the spurt in fuel prices.

Congress leader Rahul Gandhi had predicted on October 24 itself: “Tax dacoity on petrol prices is going on rising. If elections are held anywhere, there will be a little pause.”

Social media rippled with derision at the latest move by the Modi government that allowed fuel prices across the country to rise above Rs 100 per litre.

“By losing by-elections like this, we get a reduction of Rs 5 and Rs 10. Imagine what would happen if the BJP lost UP elections. I think petrol would be given free till the 2024 Lok Sabha elections,” tweeted A.K. Akash.

Elizabeth Thapa said in a tweet: “So, according to you, increasing petrol prices by over Rs 40 and diesel by over Rs 45 and then reducing it by Rs 5 and Rs 10 respectively is good news.”

Fuel prices had skyrocketed in the past few weeks after a global upsurge in crude oil rates. The prices will go down after the latest recalibration of excise duties.

The Modi government, which has been battling criticism over reforms in farm laws, said the excise duty cut in diesel was twice that on petrol.

“The Indian farmers have, through their hard work, kept the economic growth momentum going even during the lockdown phase and the massive reduction in excise on diesel will come as a boost to the farmers during the upcoming rabi season,” said a government notification on Wednesday night.

The notification urged the states to reduce the value added tax (VAT) on petrol and diesel to provide relief to consumers.

The duty cut is likely to have a revenue impact of about Rs 55,000 crore in the current financial year, according to some estimates.

While BJP national president J.P. Nadda thanked Modi and made it a point to underscore that the cut had been effected “on the eve of Diwali”, Union minister Rajeev Chandresekhar called it “a Diwali gift” from the Prime Minister, “made possible by his leadership of our strongly surging economy”.

The Opposition parties poured scorn on the Modi government’s move to slash duties on petrol and diesel after resisting pressure to do so for more than a year.

The Congress described the cut in taxes as insufficient, contending that the Congress-led UPA had sold petrol, diesel and LPG at much cheaper rates when crude oil was selling costlier in the international markets.

The people should be congratulated for showing the “mirror of truth” to the “tax-parasitic” Modi government, Congress communications chief Randeep Surjewala said.

Surjewala said the Modi government had responded to public pressure only after the setback in the by-elections. “In 2021, the price of petrol was hiked by Rs 28 and diesel by Rs 26 per litre. After losing 14 Assembly seats and two Lok Sabha seats, reducing petrol-diesel price by Rs 5 & Rs 10 is tom-tommed as ‘Diwali Gift’ of Modi Ji! Hey Ram…,” Surjewala said.

The Congress had held several demonstrations against the price hike and planned a nationwide “Jan-Jagran (awareness)” programme between November 14 and November 29 on the real reasons for the price rise. Sources said the programme would not be cancelled as the size of the relief was inadequate.

Crude oil prices fell on Wednesday as major crude consumers intensified pressure on the Opec+ to boost supplies when it met next week.