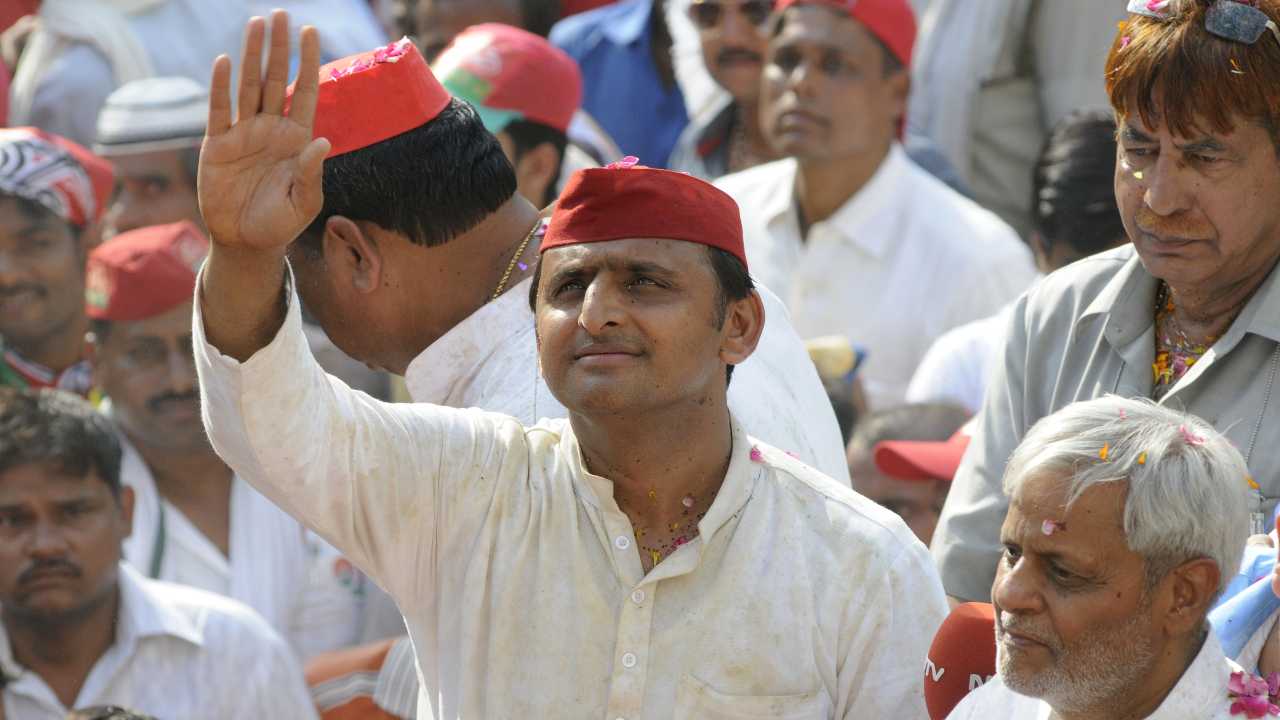 Kickstarting his party's "mission 2022" with a "rath yatra", SP chief Akhilesh Yadav on Tuesday hit out at the BJP, saying it has "crushed farmers" and on return to power in Uttar Pradesh would "crush the Constitution" as well.

The former UP CM launched the "Samajwadi Vijay Rath Yatra" from UP's Kanpur and it will cover all 403 Assembly segments ahead of the 2022 Assembly polls in the state.

Akhilesh launched the yatra after taking blessings of his father Mulayam Singh Yadav on Monday.

The yatra was flagged off by "Khazanchi", a child who was born in a queue outside a bank during demonetisation days.

A Mercedes bus has been transformed into the "rath".

The yatra will pass through Kanpur, Kanpur Dehat, Hamirpur and Jalaun in the first phase and promises to make people aware about the "corrupt, autocratic and suppressive" policies of the BJP government and establish "real democracy".

Attacking the ruling party, Akhilesh said, "The BJP has crushed farmers and if they come back to power, they are all set to crush the Constitution."

"Therefore, the Samajwadi Vijay Rath will go to people and throw the BJP out of power," the former CM said in apparent reference to the mowing down of farmers in Lakhimpur Kheri last Sunday.

"This rath will go on continuously for restoring the rights and honour of farmers," he added.

Akhilesh exhorted party workers to reach out to people and seek their support.

On the importance of Kanpur, Akhilesh said his party worked for its development.

"It is a big and industrial city. Today, business establishments here have closed down. This city can not only give employment to the youth but can also improve the economy of the country and our party will work for it," he said.

He recalled that his father Mulayam Singh Yadav had also started his "rath yatra" from this town and the party is following that tradition.

"I am confident that people will give their support and the SP government will be formed with majority," Akhilesh remarked.

Highlighting the significance of the yatra, an SP spokesman said whenever the party has taken out such a yatra, it has come to power.

Exhibition of photographs of Samajwadi Party's Muslim face Azam Khan indicates the party efforts to cash in on his popularity among the minority community and also evoke their sentiment against the BJP for sending him and his son to jail in Rampur.

Congress leader Acharya Pramod Krishnam was seen on his rath.

The Congress leader told reporters in Vrindavan that he has come to give his "subhkamna" (good wishes) to Shivpal Yadav.

Asked if he has come with a message from AICC general secretary Priyanka Gandhi Vadra, Krishnam said his visit "itself is a message".

He took a swipe at Akhilesh Yadav and BSP president Mayawati, saying they were not connected with people while hailing Shivpal Yadav as "jameeni neta" (grounded leader).

Shivpal's rath also showcased photographs of Mulayam Singh Yadav and Ram Manohar Lohia besides that of B R Ambedkar and Chaudhary Charan Singh.

The yatras by both parties come amid confusion whether the two would join hands to fight the UP polls together.

Shivpal Singh Yadav had recently said that he would wait till October 11 for the response of Akhilesh on a tie-up after which he would chart his own political course.

In 1988, a rath yatra was taken out from Kanpur by SP patron Mulayam Singh Yadav. In 2001 and 2011, it was started by Akhilesh Yadav from Lucknow and now again in 2021, it is being started from Kanpur.