Rakeshwar Manhas freed after a team was nominated to secure release 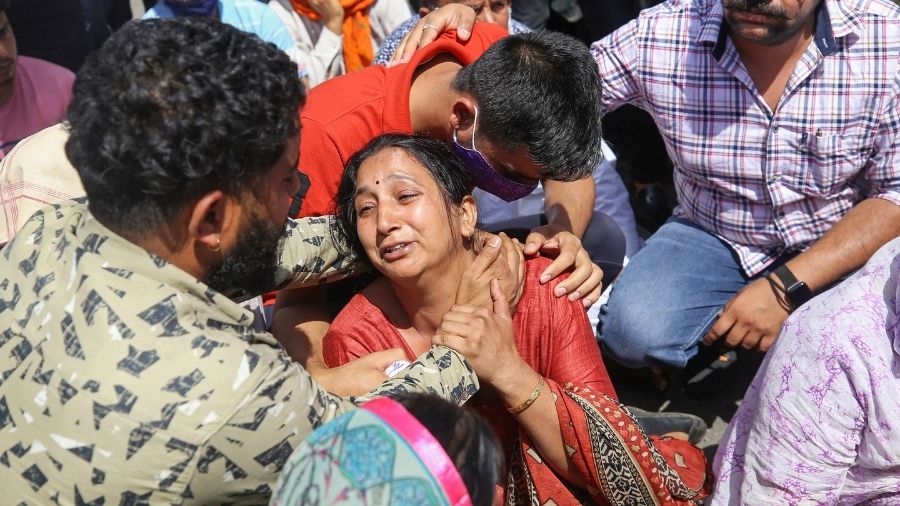 Sister of Rakeshwar Singh Manhas demands his release on Wednesday during a protest in Jammu and Kashmir.
PTI
Our Bureau, Agencies   |   Raipur   |   Published 08.04.21, 07:01 PM

CoBRA commando Rakeshwar Singh Manhas, who was abducted by Naxals after the last week's fierce gun-battle in Bastar region of Chhattisgarh, was released on Thursday, police said.

Manhas, who belonged to the 210th battalion of Commando Battalion for Resolute Action (CoBRA), an elite unit of the CRPF, had gone missing after the gunfight on Saturday and later reported to be in the captivity of the Naxals.

The Naxals handed over the jawan, who hails from Jammu, to a group of facilitators in the forest along the Bijapur and Sukma border in the presence of a large number of villagers, police said.

"At around 4.30 pm, the abducted jawan returned to Tarrem Police Station safely along with the facilitators, who went inside the jungle to trace out his location," Inspector General of Police (Bastar range) Sundarraj P said.

He is being admitted to Basaguda field hospital for medical examination and treatment, he said.

Some media persons accompanied the facilitators and recorded the video of his release. The visuals showed some armed Naxals, with faces covered, freeing the jawan tied with ropes.

Manhas was part of a squad that had gone for an anti- Naxal operation in the jungles on the Bijapur and Sukma border on the night of April 2, hours before the deadly ambush.

The gunfight had broken out between the security forces and the ultras between Tekalguda and Jonaguda villages, in which 22 troopers were killed and 31 others injured.

On Tuesday, the outlawed CPI (Maoist) had issued a statement in Hindi saying its cadres had abducted Manhas from the site of the ambush and demanded that the Chhattisgarh government appoint mediators to ensure his safe release.

The Maoists, however, had not raised any formal demands for the release of the commando.

Out of the 22 martyred personnel, the Central Reserve Police Force (CRPF) lost eight personnel, including seven CoBRA commandos and one jawan of its 'Bastariya' battalion, eight from the DRG and six from the Special Task Force.