Addressing the 'Mann ki Baat' programme, the PM said states have played an active role in curbing the pandemic 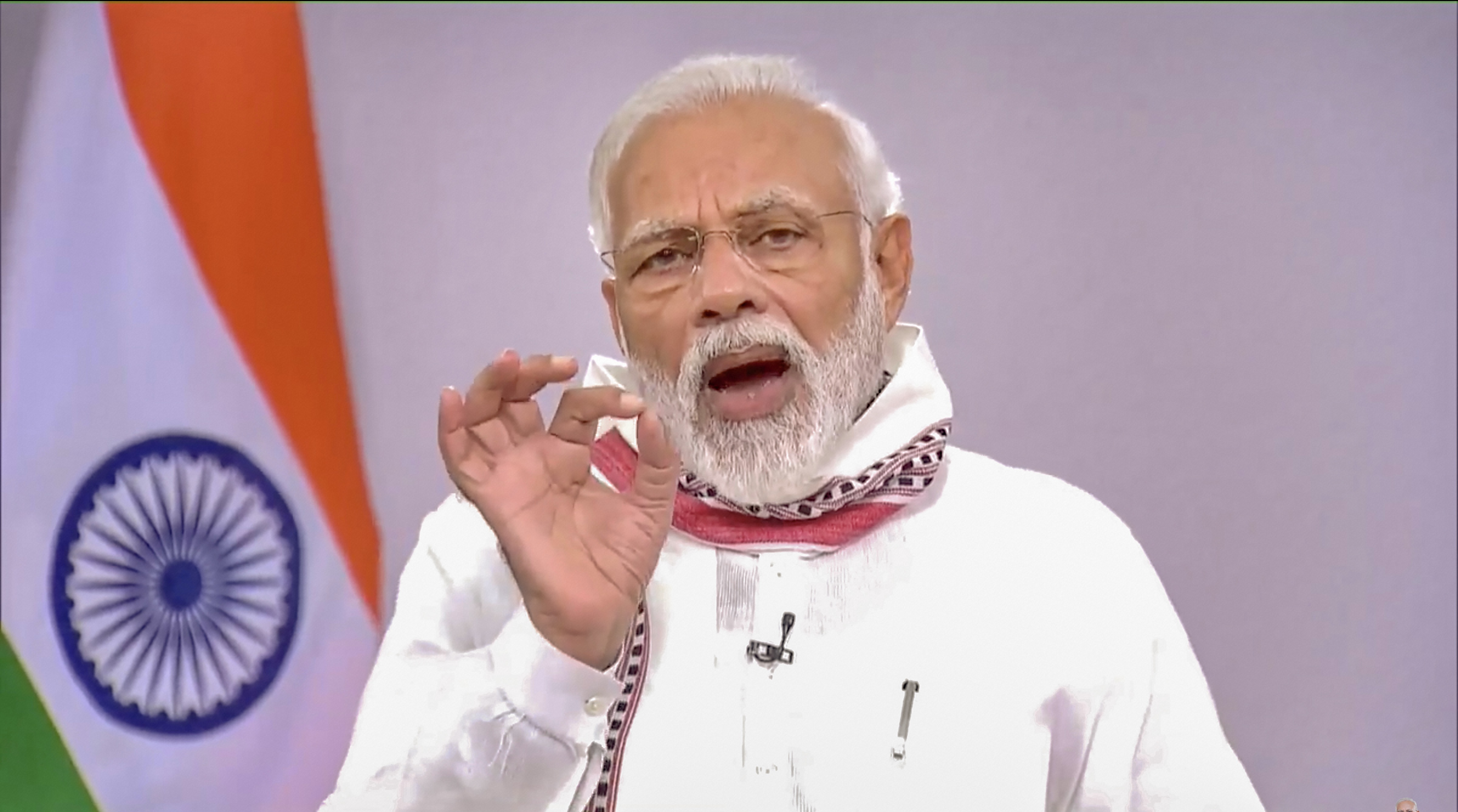 India's decision to supply medicines to countries which needed them amid the Covid-19 pandemic was guided by its ethos, Prime Minister Narendra Modi said, adding that he feels very proud when world leaders thank India and its people for the assistance.
PTI
PTI   |   New Delhi   |   Published 26.04.20, 07:00 AM

Prime Minister Narendra Modi on Sunday said India's 'people-driven' battle against Covid-19 is the only way for the country to overcome the pandemic, and asked people to shun any complacency that they will not be infected by the coronavirus because it has so far not affected the places where they live or work.

In his monthly 'Mann ki Baat' broadcast, Modi said the country is in the middle of a yudh (war) and asserted that people have to continue being careful and take precautions.

His note of caution comes against the backdrop of the Union government and states relaxing lockdown norms to revive economic activities.

'I urge you not to get overconfident. You should not in your over-enthusiasm think that if the coronavirus has not yet reached your city, village, street or office, it is not going to reach now. Never make such a mistake. The experience of the world tells us a lot in this regard,' he said.

In his 30-minute address, Modi hailed states, emergency workers and civil society groups for their contribution in combating the pandemic, and said that the resolve shown by the people of the country has led to the beginning of a transformation with businesses, offices, educational institutions, medical sector rapidly undergoing new changes.

With the country under a lockdown since March 24 midnight, he said India's people-driven battle against the pandemic will be discussed when the world discusses the crisis later.

'India's fight against the coronavirus is people-driven in the truest sense of the term. Along with people, government and administration are fighting it as well... This is the only way we can win over the virus,' he said.

Citing a Sanskrit shloka, he said. 'Fire, debt and illness, if taken lightly, grow again at the first opportunity, assuming dangerous proportions, so it is important to treat them completely. Therefore, in over-enthusiasm, there should be no negligence. We will always have to remain cautious.'

Lauding the contribution of people in terms of helping the poor with food and medicines, he likened the exercise with 'mahayagya' in which everybody is eager to contribute.

'We are fortunate that today the whole country, each and every citizen of the country, every person is a soldier in this battle and also leading the battle,' he said.

India's decision to export medicines needed by several countries, including developed nations, has earned it praise from world leaders, Modi said, noting that it did so as part of its ethos.

The Prime Minister said wearing masks will now become a part of a civilised society and also exhorted people to stop spitting in public places, saying it was high time to get rid of this 'bad habit' once and for all.

This will not only boost our basic hygiene standards but also help in preventing the spread of the coronavirus infection, he said.

The health crisis, Modi said, has made the world pay special attention to Indian heritage of yoga and ayurveda as people look to them to boost their immunity.

Modi expressed confidence that the world will acknowledge the significance of India's traditional medicine system in a similar way it adopted yoga, and lamented that hundreds of years of foreign rule have resulted in Indians failing to realise their own strengths.

Everyone in this battle is putting up a fight as per one's capacity and ability, and altruism has gained in strength in recent years, Modi said, asserting that he bowed to this sentiment.

He asked people to join 'covidwarriors.gov.in', a digital platform that links volunteers, health professionals, representatives of civil society and local administration with each other to take care of relief works.

Over 1.25 crore people are already part of this portal, he said.

Airlines have clocked a distance of over three lakh km under 'Lifeline Udan' project to deliver over five hundred tons of medical supplies to different parts of the country, while the railways has been running more than 100 parcel trains on close to 60 routes, Modi added.

He also greeted people on Akshaya-Tritiya and noted that holy month of Ramzan has also begun.

'We should pray more than ever before so that prior to the celebration of Eid the world is rid of the coronavirus and we celebrate Eid with enthusiasm and gaiety like earlier times,' Modi said, urging people to adhere to guidelines of local administration.

The pandemic, he noted, has changed the manner of celebrating festivals all over the world, including in India.

People recently observed many festivals such as Bihu, Baisakhi, Puthandu, Vishu and Odia new year while staying indoors, he said.

The fight against the epidemic has also given people a fresh perspective to look at the world around them with the importance of sanitary workers and neighbourhood shopkeepers being realised like never before, he said.

People used to think negatively of police but a humane and sensitive aspect of policing has manifested itself now as uniformed personnel has been helping those in need, he added.

The Prime Minister hoped that there may be some good news in the fight against the coronavirus during his next 'Mann ki Baat' episode, usually held on the last Sunday of every month.

He reiterated his advice to people to maintain a distance of two yards from each other to keep healthy.